The split between coupe and sedan means the addition of an unfamiliar M4 to the customary M3. But don't worry, they're as great as ever.

Few cars will ever achieve the iconic pedigree of the BMW M3. In the realm of performance sedans and coupes, it has long stood unchallenged, defining the ultimate blend of reasonably attainable luxury and manageable speed. The car has lately been available in your choice of two doors or four, but with BMW's brand gurus splitting coupes and sedans into separate models, the time of the M3 as we know it has drawn to a close.

Thus, meet the new M3, now available exclusively with four doors. Still want a coupe? Don't worry, you can get one of those too -- so long as you don't mind driving something called the M4. That name doesn't have nearly the prestige of its predecessor, but such things will come with time. After driving both M3 and M4 on and around the iconic Road America circuit in Elkhart Lake, Wis., I can say with complete confidence that the name "M4" will soon be just as highly regarded as its odd-numbered brother.

Let's start with what's different, because the list is short. The obvious addition of two doors to the M3 necessitates some differing lines, and the bulging rear fenders are styled in a way that's reminiscent of the E93 M3, a look that will cause some fans to prefer the sedan. The M4, meanwhile, has the wider, sweeping sorts of rear fenders found on the more modern BMW coupes.

The coupe weighs a smidgen less (10 pounds), but 0 to 60 times of 3.9 seconds with the dual-clutch DCT transmission are identical. Indeed, you'd have a hard time telling the difference between the two on the street. Unless you're trying to climb in the back seat, that is, which is naturally a whole lot easier in the four-door. (It's worth noting that both the M3 and M4 are lighter than their respective previous-gen cars by roughly 180 pounds.)

On the track, though, there is a slight difference between the two, mostly in the stability under braking. The M3 felt just a hair less stable under the sort of ridiculously hard braking experienced at Road America, particularly in the tricky, downhill zone into turn five. Both cars had a tendency to slither around just a bit as they slowed from 150 mph, with the sedan moving just a bit more. Nothing drastic, mind, with both feeling incredibly capable when leaning hard on the stoppers.

And what stoppers they are. All the cars I was able to test had the optional carbon ceramic brakes, which proved immensely capable on a track that eats most cars' brakes like candy thanks to the numerous high-speed braking zones. The initial bite when cold is also good, occasionally a problem with exotic brake materials, enough so that driving smoothly on the street requires a gentle touch on the left pedal. Track fiends will rightfully be sorely tempted by these, but the $8,150 price is a bit difficult to swallow.

Similarly I was only able to test the dual-clutch DCT box, meaning there were only two pedals to worry about. A six-speed manual will be standard config, this dual-clutch box being a $2,900 option. And a good one. The car shifts briskly and on demand when using the paddles behind the wheel in sport mode. Or, you can simply throw it on auto when you're looking for a more comfortable ride.

Your choice of transmission will be connected to the same three-liter, 425-horsepower inline-six, mated to a pair of turbochargers. It's a vastly different power train than the previous V-8, offering different sound, different delivery, and obviously different fuel consumption. It's too early to say conclusively which is the better engine, but I'm comfortable in saying the new straight-six is very good. Yes, even with the turbos. Throttle response isn't as immediate as a naturally aspirated machine, but the word "lag" will never enter into your mind while driving.

Indeed, the new six has more torque in more places than the V-8, which ultimately equates to more oomph. It pulls hard from low revs and doesn't give up until you hit the 7,600 redline. Along the way it has a deep, throaty growl with just a hint of turbo whine. As with other modern BMWs this acoustic balance is digitally augmented through the car's stereo system, but drop a gear in a tunnel with the windows down and you won't be disappointed with the raucous resonance.

Still, dawdle through the streets at low revs and it's a very quiet car. Overall it's a comfortable ride for a machine with this kind of performance, though some may find the damping to be a bit aggressive for casual cruising. The $1,000 active suspension would be a wise box to tick, but even the cars with fixed damping are far more pliant and ultimately refined on rough roads than, say, the 2015 Subaru STI that we just tested.

It's certainly a far more comfortable interior, too. Seats are well-bolstered and supportive, though not quite as adjustable as M3 thrones of years past. These new units are lighter than before, and so do away with adjustable thigh supports and even lumbar support. Still, they work well on both street and track.

Watch this: Testing BMW's GoPro integration at the track in a BMW M3
05:17 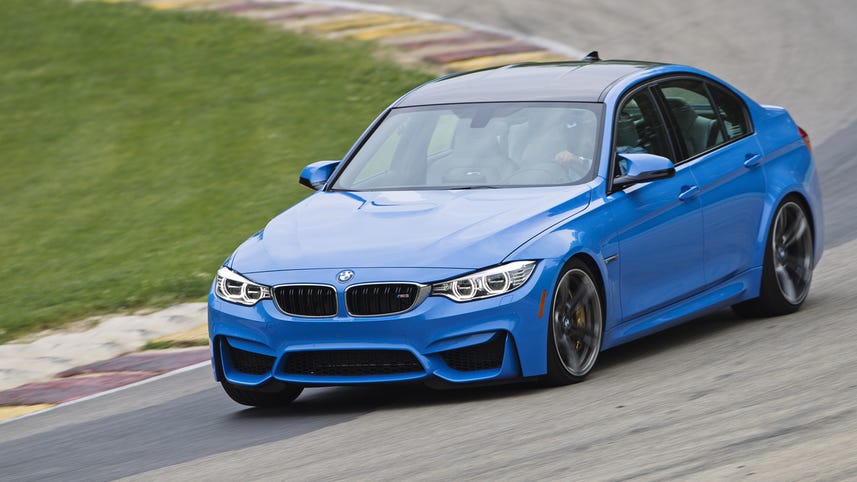 Testing BMW's GoPro integration at the track in a BMW M3
5:17
Watch Now

Between the seats you'll find BMW's familiar iDrive controller, which provides for an easy and intuitive way to navigate the powerful infotainment system. A large, widescreen display is positioned on top of the dash. The BMW ConnectedDrive platform means compatibility with plenty of apps, including Yelp and Pandora, plus the new GoPro connectivity that we also tested on the track.

Whether you consider the M3 and M4 to be two new cars or two sides of the same coin, the core truth is that they're excellent. Not as raw as the earlier M3s or as plush as BMW's bigger options, but as ever, striking a great balance between something comfortably at home on the straights at Road America and on the rest of the American roads nearby.