It's been a while since I've been excited about any variation of VW's Golf, but the latest Golf R revealed at the 2013 International Motor Show in Frankfurt has captured my attention. 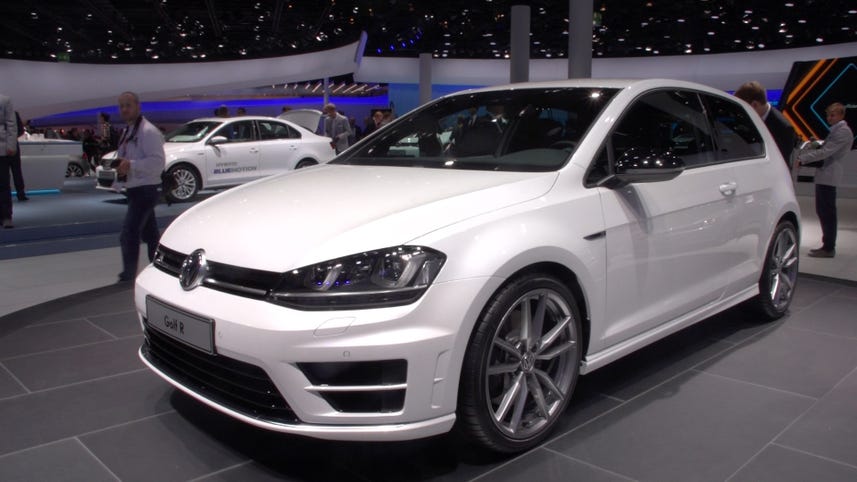 FRANKFURT -- It's been a while since I've gotten excited about any variation of the Volkswagen Golf, but the latest version of the highest-performance Golf R revealed at the 2013 International Motor Show in Frankfurt has captured my attention.

The new R is powered by the newest version of VW's 2.0-liter TSI engine (internally known as the EA888), but with even more power than the mill found in the GTI. Output is rated at 296 horsepower and 280 pound-feet of torque. That's a significant power bump over the previous-generation Golf R.

Further distinguishing itself from the rest of the Mk7 Golf models, the R puts its power to all four wheels (rather than just the front) via the VW 4Motion all-wheel-drive system. This system can disengage the rear wheels when cruising for reduced drivetrain drag and increased fuel economy. Though basically a front-driver when you don't need all-wheel, the system's Haldex coupling can instantly and automatically re-engage the rear axle in a fraction of a second when rear-end torque is needed via a electrohydraulic oil pump. Up to 100 percent of available torque can be sent to the rear axle when conditions dictate. This 4Motion system also makes use of the R's ABS as "electronic differentials" applying the brakes briefly to an individual wheel to control slipping wheels.

Drive ratios are chosen either manually via a six-speed manual transmission or automatically with the six-speed DSG dual-clutch automatic. With the manual transmission, the Golf R hits 62 mph from a stop in 5.3 seconds. The DSG will do the same sprint in just 4.9 seconds with computerized precision on its way to the Golf R's electronically limited top speed of 155 mph.

Thanks to technologies such as start-stop ignition and brake energy regeneration, as well as internal engine upgrades that aid in friction and thermal efficiency, VW was able to increase the Golf R's combined fuel economy to 33 and 34 mpg on the EU testing cycle for the manual and DSG models, respectively. That's up from the previous generation R's 28 mpg combined. US/EPA estimates have not yet been announced.

Other differences between the R and lesser Mk7 Golf models include a sport-tuned suspension that sits a few ticks lower even than the GTI's, a Sport electronic stability control system that can be turned completely off when at the track, quicker electronic power steering with fewer turns to lock than other Golf Mk7 models, and uprated brakes.

While the R also features a number of unique exterior styling bits that visually differentiate it, there's no escaping that this is yet another in a very long line of Golf models -- all of which generally look the same to me. This degree of anonymity could be a very good thing for potential R drivers who want to stay under the radar and not attract a lot of attention.

Inside the cabin, the Golf R is treated to R-specific seating and dashboard trim and the newest-generation Volkswagen infotainment and navigation. Touch-screen controls are standard on the Golf R with 5-inch, 5.8-inch, and 8-inch displays available. The two largest sizes also feature a clever proximity feature that automatically switches the display configuration to be ready to accept inputs when the driver's or front passenger's hand approaches the screen.

All Golf R models have four drive modes that change the characteristics of the throttle, engine, and transmission between Normal, Eco, and Race modes, as well as a driver-customizable Individual setting. Drivers who opt to equip VW's DCC (dynamic chassis control) system -- an adaptive suspension system by any other name -- gain the additional option to adjust the suspension settings and characteristics at the touch of a button, as well as a fifth driving mode, Comfort. The system is also able to continuously monitor and adjust damper settings based on conditions reported by the Golf R's various sensors.

The Volkswagen Golf R will go on sale in European markets later this year, but won't reach the US until late 2014 when it will likely be sold as a 2015 model. US pricing hasn't been announced.