CNET takes on the onerous job of driving and riding in the 2012 Bentley Mulsanne, a flagship sedan with iPads for the rear-seat passengers. 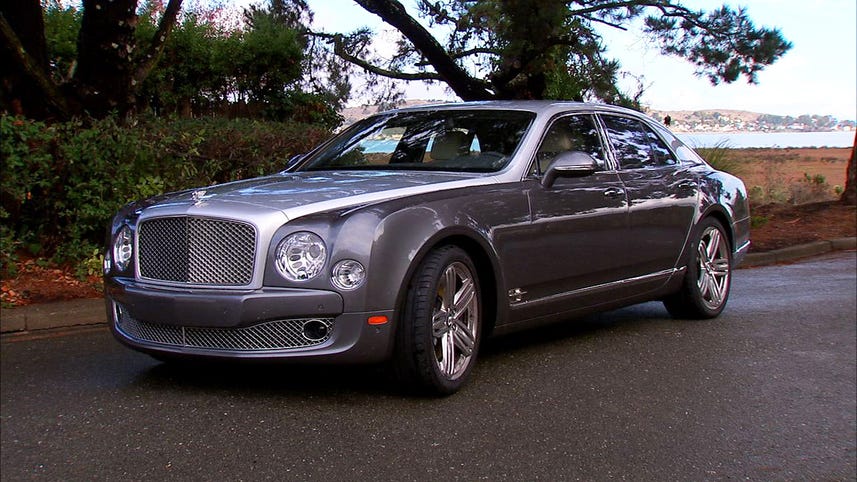 A Lexus LS or a Mercedes-Benz S-class may seem like the height of automotive luxury, but there exists a higher plane of opulence, embodied by a car such as the Bentley Mulsanne. At this level, rubberized surfaces and plastics get replaced by wood, stainless steel, and leather. The Mulsanne needs a better descriptor than "luxury"; maybe call it HD luxury, or giga-luxury.

Like Rolls-Royce, its closest competitor, Bentley employs craftsmen patient enough to spend hours working on one piece of wood trim for the doors. The leather covering the seats comes from bulls, but not just any bulls. Bentley strips the hides from Scandinavian bulls for its seats, because apparently these cattle live free of barbed wire, which would mar their skin.

Cars with this sort of old-world coachwork sometimes suffer in the cabin tech department, which can take a lesser priority. However, Bentley has a secret weapon of German origin. As part of the Volkswagen Group, Bentley draws on Audi for the Mulsanne's cabin electronics, and Audi is currently among the best in the business.

On the Mulsanne's center dashboard, we see an LCD showing navigation, audio, and hands-free phone information. Below the climate controls on the dashboard is a set of controls following the same paradigm as those in Audi cars, a dial surrounded by four buttons, with other buttons giving quick access to specific functions, such as navigation.

The navigation system itself is no better than that found in Audi models, and doesn't even offer the Google Earth integration seen in cars such as the Audi S5. It is very functional, and if you don't want to look at the brightly colored maps, the screen can hide away behind a wooden panel.

Exceptional audio
The real highlight of the cabin tech is the Naim audio system, a $7,415 option. This upgrade replaces the standard 14 speakers with 20, custom-made by Naim for Bentley. The amp rates at 2,200 watts, and each speaker gets its own channel. On paper, this system blows any other production automotive system out of the water. In real life, it is even better.

Playing track after track of music ranging from classical to electronic, this system produced near-perfect audio. The only issue I had was that the reproduction seemed to emphasize the midranges with the bass and treble set to flat. Hardly a complaint, and one easily fixed by setting the tone controls.

And Naim, which makes home stereo components that go for tens of thousands of dollars, shows its awareness that we are well into the 21st century. Among the different digital signal-processing profiles available is one designed to handle compressed digital music. This profile fills in those missing bits that the MP3 compression algorithm threw out so the files would fit on your iPod.

A velvet-lined tray in the Mulsanne slides out of the center dashboard. It contains an iPod adapter cable, similar to what Audi uses in its cars. This tray is a little small for the current crop of smartphones. I could barely fit my encased iPhone 3GS in it. Playing music from this source, I was treated to a nice library interface on the LCD.

With the Naim audio system and the big, comfortable seats covered in Scandinavian bull hide, I was content to sit in the Mulsanne listening to music, without going anywhere at all.

Torque by the ton
However, the Mulsanne has wheels for a reason. Under the hood sits a Bentley standard 6.75-liter V-8, with twin turbochargers strapped on for good measure. This very English engine delivers 505 horsepower and 752 pound-feet of torque. Why so much torque compared with the horsepower? Because the Mulsanne weighs in at about 3 tons, and that is with an aluminum body.

The body of the Mulsanne is pretty striking in itself. It features the big Bentley grille in front with subtly embedded headlights. From rear to front fenders, the sides present a completely smooth surface, the lack of seams being thanks to a welding process that requires many man-hours for initial strengthening and then finishing. Most cars squeak and develop odd little sounds that we just get used to. With its body and coachwork, the Mulsanne should remain quiet and solid through many, many years.

The massive torque moves the Mulsanne's 3 tons almost effortlessly. For the driver, it responds instantly to accelerator input, either gliding forward easily or turning into a charging freight train, depending on pedal angle. The big shifter, topped with a B emblem, works in unique fashion. Instead of it sticking into each position of a typical gate, you push down the B emblem and either push it forward or pull it back to sequentially go through the eight-speed automatic transmission's drive modes. After each movement, it settles back into its center position.

As the Mulsanne is Bentley's big flagship sedan, I expected that it would need an S.S. in front of its name, such as the Rolls-Royce Phantom deserves. But the Mulsanne proved surprising maneuverable. Sure, the hood stretches miles out in front of the windscreen, the flying B hood ornament (a $3,000 option) serving as a targeting scope, but it did not feel any more ponderous than a big sedan from Lexus or Mercedes-Benz.

On the other hand, it's no Continental, Bentley's sporty coupe. The Mulsanne uses an air suspension to soften the ride, but it does not keep the car from leaning in a hard corner. Even given its HD luxury nature, the Mulsanne still gets sport modes for ride and transmission. A dial near the shifter takes the ride quality from Comfort to B to Sport. That B mode lets the car automatically adjust the suspension response based on how the driver is handling the car.

In Comfort mode, the Mulsanne went down the road very smoothly, although I did not find the ride quality much better than a high-end Mercedes-Benz. Both cars insulate passengers from jolts very well, although the Mulsanne gets better overall sound dampening.

Back-seat driver
If you leave the driving to the help, the rear seat offers plenty of amenities. Covered in the same thick, unscarred bull hide, the rear seats include power adjustment and a massage function. There are even memory settings, so the lord and lady don't always have to sit on the same sides.

Bentley keeps up the modernity in the rear seats, as well, with motorized tray tables fitted with iPads and wireless keyboards, a $33,620 option. These iPads connect to the car's own wireless hot spot, allowing full Internet access on the road.

While the rear seats are certainly comfortable, the Mulsanne doesn't offer the type of rear lounge found in the Rolls-Royce Phantom. Front and rear cabin offer about the same amount of space.

The EPA fuel economy for the Mulsanne comes in at only 11 mpg city and 18 mpg highway, but if you are buying one, I assume your financial manager arranged for ownership to reside with a Cayman Islands shell corporation, which will also pay for gas and insurance.

The upfront price of $290,000, before options, may sound utterly ridiculous to the average car buyer. However, with the build quality of the Mulsanne your financial manager can amortize the cost over its lifetime, which will probably be longer than yours.