Sony SmartWatch 3 stands out from Android crowd with swappable straps

Sony's new SmartWatch 3 improves on its predecessor with its waterproof, customisable design and its Android Wear software.

Andrew is CNET's go-to guy for product coverage and lead photographer for Europe. When not testing the latest phones, he can normally be found with his camera in hand, behind his drums or eating his stash of home-cooked food. Sometimes all at once.

Sony's previous efforts at making a smart watch haven't exactly been huge successes. In fact, the SmartWatch 2 was pretty awful. Seemingly keen to learn from its mistakes, however, Sony is back with the third generation of its smart watch, unsurprisingly named the SmartWatch 3.

The SmartWatch 3 has an improved design from its predecessor -- including better waterproofing and interchangeable straps -- and crucially, Sony has ditched its clunky and unpleasant interface. It now runs Android Wear, the smart watch software developed by Google that aims to provide a unified platform for companies like Sony, Samsung, LG and Motorola to load on to their products and allow developers to create apps that can run equally well across all devices.

Like the majority of the Android Wear smart watches knocking about, the SmartWatch 3 is basically just a square piece of glass set into a rubber wrist strap. The rubber of the strap meets the glass screen, making it look a little different from the LG G Watch, which has a strap that connects only on the edges of the watch itself. It's fairly inoffensive looking, although it's not exactly the most elegant watch I've ever seen, smart or otherwise. It does at least look a good deal more stylish than its predecessor. 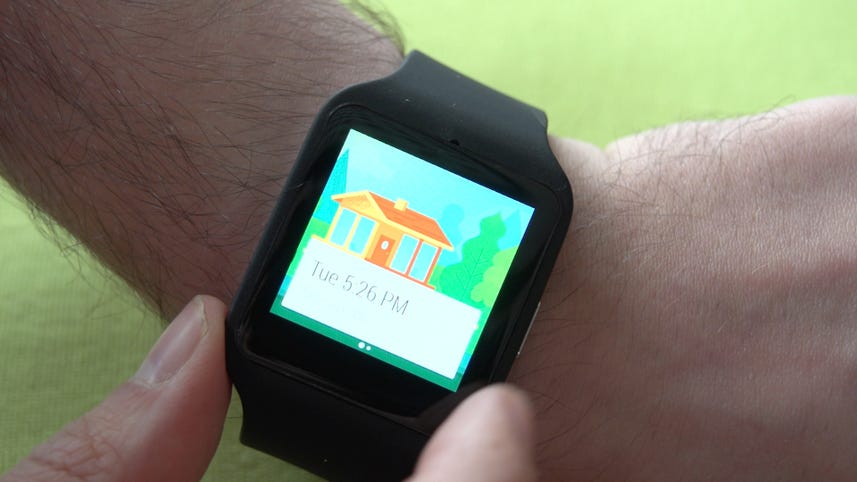 A neat trick, however, is the ability to remove the actual watch unit from the strap. You're able to pop the screen out from its rubber surround, allowing you to change the colour and style of the strap. Although I only saw a couple of different colours, I'm sure Sony will have a variety of different strap styles available to buy, which should help make it a little more uniquely yours than the bog-standard black version looks.

The SmartWatch 3 is totally waterproof, not just water-resistant, meaning you don't need to worry about ruining your expensive new toy when you're washing the dishes. It also means you don't have to take it off in the shower, although be aware that the falling water droplets will activate the touchscreen and, in my experience with the LG G Watch, will accidentally pause whatever you're listening to. (Listening to podcasts in the gym shower while your phone sits in a locker may be a fairly niche issue that I and only a few others will ever suffer from.)

The rubber wristband seemed reasonably comfortable to wear, although how it feels after a whole day of being worn -- particularly after an intense workout -- remains to be seen. It fastens using a folding clasp mechanism that can be shifted easily up and down the rubber band to make it a looser or tighter fit.

The watch face itself has a 1.6-inch square display (the Moto 360 is still the only smart watch we've seen that's dared to go with a round face) with a 320x320-pixel resolution. That's basically the same that we've seen on other watches so it's no surprise that the its screen looked about as good as its competitors. Text was easy to read and it seemed quite easy to see under the bright lights of the room Sony had booked to show it off.

The interface of the watch is identical to other Android Wear smart watches such as the G Watch or Samsung's Gear Live. We're yet to see companies putting their own stamp on Android Wear as we've seen with the Android operating system for phones. Long may that last.

Sony has thrown a couple of little extras in, however, including its own Walkman apps, which will apparently let you navigate your music collection a little more easily (the standard Android Wear media navigation tools only allows you to skip or pause tracks).

It will also have software on board to let it sync with Sony's health and lifestyle tracking app LifeLog. LifeLog acts as both an activity tracker (keeping tabs on steps taken, distance covered and so on) as well as keeping a record of what music you've listened to, movies you've watched, how long you've slept and what photos you've taken and where.

Although LifeLog is available to download onto any Android device, Sony reckons it works best with its SmartBand -- and now, presumably, the SmartWatch 3 -- as it allows you to track more things than standard fitness bands can. It also allows you to "bookmark" moments, essentially meaning you tap the screen of your wearable device to log on the app everything you were doing at that moment (think: GPS location, music you were listening to, time of day etc).

With its waterproof body, interchangeable straps and Android Wear operating system, the SmartWatch 3 is a big step forward from its dismal predecessor. Its design and specs put it roughly in line with the existing lineup of Android Wear watches we've already seen from the likes of LG and Samsung -- particularly as their interfaces are identical.

Sony is going to have to come up with a wide array of snazzy straps to make it visually more appealing than its competitors, though, and will have to make worthwhile watch-based apps for its music and life-tracking apps if it hopes to stand out from this rather samey crowd.