The Galaxy S6's edgier sibling adds a stunning wraparound screen. If you have the cash, it's worth the steeper cost.

That supercool design comes with a big price tag, and the screen doesn't deliver any real killer apps. Like the regular S6, the Edge doesn't support swappable batteries or expandable storage.

Samsung's striking, high-end Galaxy S6 Edge has the beauty, brains and brawn to take down the iPhone 6 and all the Android competition.

The original Samsung Galaxy S6 Edge review, published in April 2015 and updated since then, follows.

When the Galaxy S6 and 6S Edge debuted in the Spring of 2015, they represented a dramatic departure for Samsung. Gone was the utilitarian plastic build of every Galaxy S past; in its place, glass and aluminum alloy, and, in the case of the S6 Edge, a uniquely curved screen. CNET designated the Galaxy S6 "first great smartphone of 2015," awarding it an Editor's Choice. The Galaxy S6 Edge is an even higher-end, "designer" version of the S6 -- and you'll pay a premium for it.

The Galaxy S6 Edge's innovative, rounded-side display has earned a reputation as one of the best screens on a smartphone. And though the S6 and S6 Edge are close siblings with similar specs -- attractive aesthetics, first class components, and a few features (like wireless charging support) that cannot be found on any iPhone -- the S6 Edge certainly boasts the more premium look and feel. That noted, in the US, the S6 Edge costs $100 more than the S6 on contract, and about $100 to $130 more off-contract, with $100 bumps for each storage size. Given their nearly identical specs, the Galaxy S6 remains the better value.

In March 2016, Samsung introduced newer versions of its flagship Galaxy, the S7 and S7 Edge, at Mobile World Congress in Barcelona. While it has many of the same specs as the S7 -- a 12-megapixel camera, water resistance, a Qualcomm Snapdragon 820 processor, and a microSD slot -- the S7 Edge has a larger, 5.5-inch screen versus the S7's 5.1-incher. Also noteworthy is the S7 Edge's 3,600mAh battery -- rated for longer run time that the S7, the Edge 6+ and even the Galaxy Note 5, which is a real marathon runner.

If you already own an S6 Edge or even a newer S6 Edge+, the upgrade to an S7 or S7 Edge may not be worth it. That noted, the Galaxy S6 and S6 Edge remain affordable, competent, full-featured Samsung phones and represent some of the best values in Samsung's lineup.

Editors' note: This review has been updated extensively since its original publication on March 26, with additions including battery testing results and additional comparisons to the standard Galaxy S6. Ratings have also been added.

Watch this: Tips for navigating your Galaxy S6 and S6 Edge
01:39 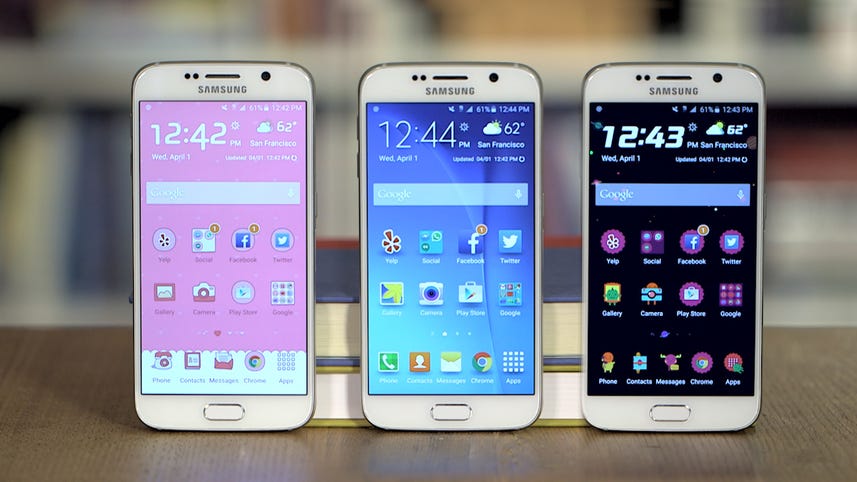 The S6 Edge: Like the S6, in a far prettier package

Releasing multiple variants of its Galaxy phones is old hat with Samsung. But 2015's Galaxy S6 line is the first time the company has announced and released two sibling models simultaneously. Make no mistake, though: the hardware differences between the two handsets are mostly skin-deep.

Where the S6 has straight sides, the S6 Edge tapers on its right and left sides, where the curved portion of the screens arc to meet the back. Though it feels slimmer, the Edge is a hair thicker in its fattest part, but also a tad lighter. The power button and nano-SIM card slot also move up top on this variant.

The Edge also has a slightly higher capacity battery, presumably to work with night mode on the Edge display: 2,600mAh on the Edge versus 2,550mAh for the standard S6. The Edge gives us an average of 13.5 hours of battery run time in our looping-video tests, an hour over the S6's 12.4-hour average. Keep in mind that these tests don't take into account real-world longevity, especially if you're constantly using the Edge screen features, like night mode.

While both the S6 and S6 Edge are available in gold, black and white, Samsung throws in some color to each lineup. The Edge's portfolio gets jewel-toned emerald green, while the S6 springs for topaz blue.

Besides the unique screen and the few subtle distinctions listed above, the S6 Edge is otherwise identical to the standard S6. That includes the same 1440p ultra-HD screen, 16-megapixel camera and Exynos octa-core processor.

See my in-depth Galaxy S6 review for more details on how that translates into performance and everyday usage, and rest assured that the Edge delivers the same experience. (Except for the screen features and design flair -- which are, in fact, pretty cool.)

Design: Two curves really are better than none

Rounded glass on the left and right sides of the 5.1-inch metal-wrought Galaxy S6 Edge give this phone its name. The curved portions of screen meet the phone's back to form symmetrical ridges on either side and a kind of flattened bubble effect on the glass itself.

This actually works out better than it sounds. Its unique shape pops, giving it plenty of in-hand appeal. The phone feels aggressively slim, yet balanced, and the sharper sides provide a surprisingly solid grip.

While I had no problem fumbling the device, all that slim glass gives it a much more petite and delicate look and feel than a lot of other phones. You may feel more comfortable protecting all that investment in a case. Unfortunately, there aren't a ton of options at the time of this writing (but I'm getting in a gaggle of cases to find my favorite, and will update y'all soon.)

Compared with the S6's familiar rectangular shape, the S6 Edge is palpably modern and chic. If you're wondering, the Note Edge felt the same way despite its asymmetry, though I like the way this Edge looks even more.

The curved display isn't only an aesthetic affectation, either. Navigating around the S6 and the Edge side-by-side in real life produces more lifelike icons and images than when viewing them on the flat S6 display. (Alas, this doesn't translate well in a photo.)

The concave Galaxy Round, which is sold only in South Korea, had some of this effect, too. When reviewing that phone, the screen's deeper bend occasionally caused a parallax problem, one that the S6 Edge seems to avoid since most of its surface is flat.

Edge display: Cute, but only a little useful

Think of the S6 Edge's sidebar, called the Edge screen, as a specialized communications hub.

If you're familiar with this region on the Note Edge -- the 2014 phablet that offered a similar wraparound screen, albeit on only one side -- it's time to reflash that image. Gone is the always-on strip of interface for launching apps and sometimes viewing alerts. Here, the optional Edge screen slides out from the left or right when you want it, but otherwise remains hidden from view. You can even disable it.

The only downside here is that if you want to open the Edge screen, you have to first locate and then slide out a thin gray tab in the upper third of your display, which is easy to miss.

Mostly, you'll use the Edge screen to view notifications for email, texts, missed calls and app activity (you'll customize this in the settings). These notices flash on the sidebar strip without you having to check on them. Yes, it can be a little redundant alongside the notification shade up top, but you'll be able to read more of the message on the Edge display, which I do find convenient.

Do these things with the Samsung Galaxy S6 Edge's edge (pictures)

The Edge screen also serves as a color-coded hub for five of your favorite contacts. Select one, and you can fast-track a call or message. If you miss an Edge-friend's correspondence, a slim tab in their designated color appears on the side of the display to alert you, like a personalized sticky note. Slide that tab open to start the process of calling or texting them back.

Watch this: Using the People Edge on the Samsung Galaxy S6 Edge
01:28 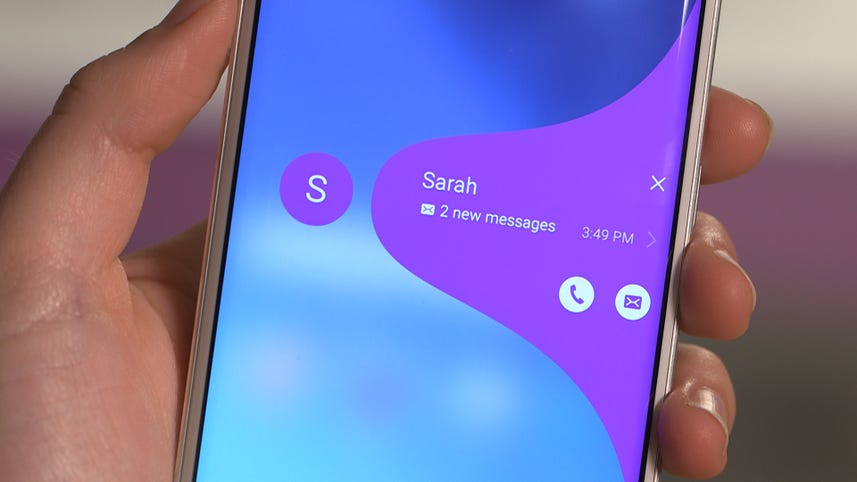 There's one other very specific activity. Say you have the phone upside-down on the table during dinner. If one of your five besties calls or texts, the edge of the phone will glow with their associated color. If you can't pick up the phone, you can press a sensor near the camera module to send a preprogrammed message.

Although Samsung has shed most of the Note Edge's original functionality, it did carry over two features to the S6 Edge. My favorite, night mode, displays the time during your designated sleeping hours while the rest of the screen stays off. It's just bright enough to read if you wake up in the middle of the night, but dim enough to help you reclaim those z's.

You can actually swipe the sleeping Edge display at any time (so long as the phone is on) to pull up the date and time, weather and a badge for missed or unread messages. There's a little lag here that Samsung should fix, but it works well enough.

Yes, Samsung largely created the Edge's dual-curved screen not because of what it can do for you, but because the company could.

I'm glad it did. It was a bit of a gamble, but the industry is better for it. The Edge's rounded edges are so successful because the phone's smoothness draws you in the minute you hold it in your hands and behold its slightly convex screen.

There are so many similarities between the iPhone 6 and the Galaxy S6, that their Android or iOS operating system becomes the most distinguishing factor between the two. Until you consider the Edge. Apple hasn't tried anything like a curved-screen phone, and Samsung's efforts both look fantastic and also suck you right in.

Samsung's points for creativity tip it over the (ahem) edge. 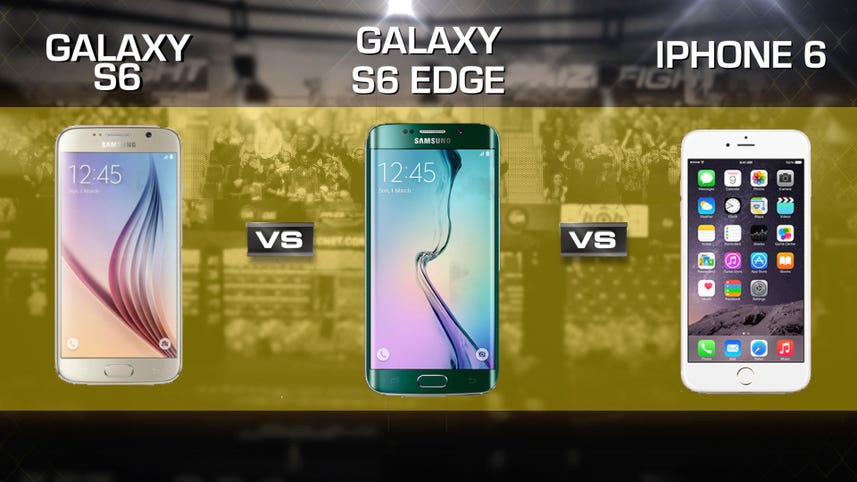 Versus the Galaxy S6

Compared to the Edge, the base model Galaxy S6 is the everyman's phone, and it carries its well-rounded features and high-performing hardware to the Edge as well.

If you're feeling flush, the Edge is the phone to buy, mostly because of its design aesthetics and also the smattering of practical functionality applied to the Edge screen. I still believe that these tricks are too limited to be "killer" apps, so your decision really comes down to where you stand on design aesthetics.

Fiscal conservatives will want to spend that extra money on stepping up to the regular S6's 64GB, or 128GB capacities, unless they're tempted by the Edge's supple shape. You can't go wrong either way: that's a decision that you and your wallet are going to have to wrestle over.

But make sure you check out both phones in person. Once you get a real-life look at the Edge, you may find that premium a lot easier to justify.