I've been writing about and reviewing consumer technology since before the turn of the century. I'm also a photographer and cat herder, frequently at the same time.

The Razer Raptor 27, the company's first dip into the seething waters of the gaming display market, is the mullet of monitors: elegant business in the front; aggressive party in the back. If I had to come up with a single word to describe it, I'd go with "overdesigned." It's strikingly stylized and a bit impractical. Its bright 27-inch, 2,560x1,440-pixel panel is quite good, and its feature set, which includes support for FreeSync and G-Sync-Compatible adaptive refresh, a wide color gamut and a 144Hz refresh rate, hits most of the right notes you'd expect for its big $700 price tag.

The Razer Raptor 27 is a very good 27-inch display for 1440p gaming. It gets pretty bright and has a broad enough color gamut to make your games pop, and it's packaged in a striking design.

The cabling may be impractical if you work on a crowded desk or need to replace cables. Tall people may find they can't raise it high enough for comfort. Plus, it's expensive.

It's a great 27-inch gaming monitor for 1440p setups, but you may want to consider the Razer Raptor 27's design drawbacks before buying.

That's on the high side, though, since you can get the just-as-terrific, albeit less fancy-schmancy, 4K Acer Predator XB273 for only $100 more. The bulk of Razer's lesser competitors hover in the $400 range.

The striking design is an interesting translation of Razer's black-slab laptop aesthetic, and there are some things I really like about it, like the elegant Chroma-compatible underglow. Plus, the dark gray fabric back adds to the classy vibe you don't normally get from a gaming monitor.

To access the connectors, you can tilt the display back 90 degrees. That kind of ease of access is a touch few monitor manufacturers think about, but which makes life so much better when you work on a crowded desktop or need to frequently get to them. You can't rotate the display, but the base rotates smoothly on a desk while still resisting sliding in any other direction.

I've noticed, however, that the rubbery material it uses leaves marks on surfaces like the laminate bench it's been sitting on here in the CNET Lab -- the dock for the Viper Ultimate has the same base and the same problem. 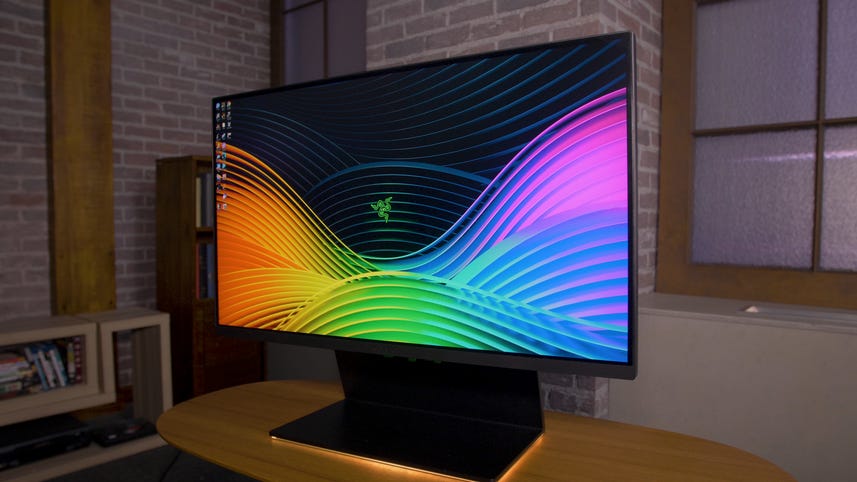 But the cabling is just kind of nuts. Razer designed it to use flat, bright green cables with right-angle connectors that feed through individual channels in the back. That means if a cable is bad you need to replace it with a matching one from Razer, or suffer with a third-party flat cable that doesn't look the same, or worse, a standard cable that doesn't bend in the right ways, all defeating the purpose of the highly stylized design.

The cables don't glide easily through the channels, so getting everything to lie properly can be a pain. While DisplayPort, HDMI, USB-C cables and a USB-A extender come in the box, there's no matching DisplayPort to Mini DisplayPort cable... which you'd need to connect to a Razer laptop, or most any laptop, to get G-Sync compatible adaptive refresh. Although it supports USB-C alt mode (DisplayPort) for connecting via USB-C, Nvidia requires the monitor be on the GPU bus for all G-Sync variable refresh, but USB-C is on the internal GPU/CPU bus.

Plus, that side-by-side channel design means the base has to be huge at a time when most manufacturers are going small to conserve desk space. And I've already noticed a ding in it which I can't unsee.

You can lower the monitor pretty far down, sort of like the Samsung Space Gaming Monitor, which is kind of cool. But it has a limited 3.9-inch (100mm) travel: You can only raise it high enough to where the center, in other words directly in front of your eyes, is about 13 inches from the desktop. The other two monitors currently on my desk can do 17 inches. Not much of a problem for me, but I'm not a tall guy with a long torso.

Design aside, it's a very good monitor. Its native gamut tests out at about 94% coverage of P3 -- about 132% of sRGB -- and it can hit a relatively high peak brightness in HDR mode of about 480 nits, though more typically 400 nits. Default brightness is about 240 nits, but if you bump it all the way up, it will deliver 370 nits. It can get brighter at 60Hz than at 144Hz, though.

It has several game profiles that vary predominantly by brightness -- FPS, MMO, Racing. But a novel Streaming profile changes the gamma to 1.5, which vastly increases the brightness across most of the tonal range, increases the contrast a little and bumps the white point to a cooler 6,900K or so to improve screen broadcasts and recording.

Using it in G-Sync-compatibility mode put the refresh rate in lockstep with frame rates, but at 144Hz top refresh I didn't run into much need for it. Though Razer boasts a 1 millisecond pixel response, that's in Motion Blur reduction mode, which makes the screen very, very dim -- 63 nits -- and doubles images.

The panel exhibited no visible backlight bleed, which was pretty impressive.