Nokia's Lumia 1020 is the Windows Phone camera king we've been anxiously awaiting for two years. Here are our hands-on impressions. 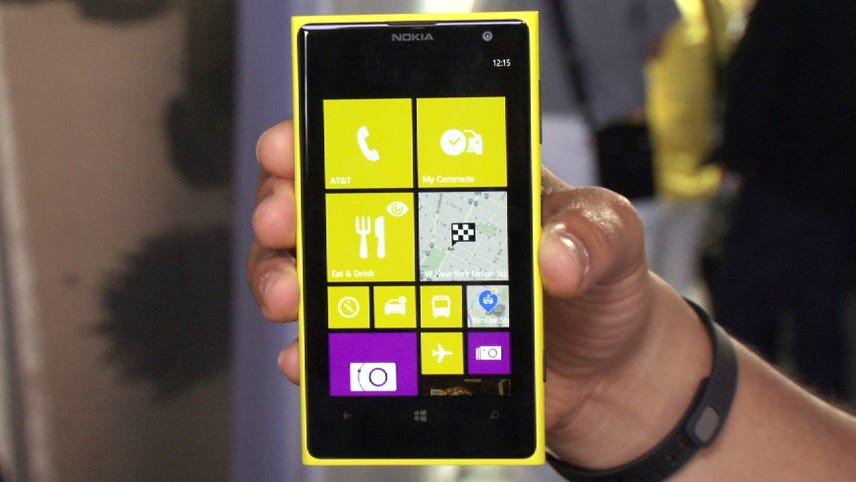 You can sum up Nokia's just-unveiled Lumia 1020 in three words: 41, megapixel, camera.

Teased and leaked to death up to the very last minute before the big reveal, the Lumia 1020's 41-megapixel shooter is what makes Nokia's next marquee Windows phone, and what gives hardware jockeys a reason to salivate.

The Windows Phone 8 device will sell in the U.S. exclusively at AT&T for a hefty $299.99 with two-year contract. Preorders begin July 16, with the Lumia 1020 becoming available online and in stores July 26. (The Lumia 1020 will also sell globally.)

It's all about the camera
Make no mistake about it: the Lumia 1020's stunningly enormous image resolution is this smartphone's single killer feature and sole reason for being. Yep, the 1020 puts the mega back in megapixels.

Here, Nokia pairs an ultralarge camera sensor with the company's PureView image-processing software, finally bringing us the smartphone we hoped the Lumia 920 and its many variants would be.

Camera geeks looking for the nitty-gritty will find six-lens Carl Zeiss optics (as in the recently unveiled Lumia 925), which also takes on wide angles.

It has high-resolution 3x zoom, autofocus (you can manually focus, too), and a dual-flash system. A smaller LED flash complements the larger Xenon flash -- a design we saw in Verizon's Lumia 928 -- and the entire shooter captures 1080p HD video at a rate of 30 frames per second.

Ball bearings surrounding the lens promise image stabilization, which CEO Stephen Elop demonstrated onstage with photos he took on a wobbly boat. We suspect that ball bearings replaced the stabilizing springs found in the Lumia 920 to conserve space and keep the camera mount profile as low as possible.

Nokia has also made strides -- and had successes -- with its low-light photos. In fact, the Lumia 928's camera has the best low-light quality of any phone's that we've seen, with the iPhone 5 a close second in our photo tests. Nokia aims for even more improved low-light performance from its Lumia 1020.

Nokia's Pro Camera settings boast controls that let shutterbugs and serious photographers easily navigate their options on the 41-megapixel beast, including manual exposure settings and long exposure times. The camera app also includes a tutorial, which sounds helpful for newbies wanting to learn how to use their high-octane phone, though we'll have to wait and see what the phone can teach us.

Couple that with Windows Phone camera apps, called lenses, that layer on additional settings you won't find in the native camera app, and you have an interesting camera story that -- Nokia hopes -- will run Samsung's 16-megapixel Galaxy S4 Zoom smartphone camera into the ground.

We got a chance to try out the Lumia 1020's camera app, which felt lively when fired up, taking photos quickly. Manipulating the Nokia's graphical camera settings was also intuitive once we got the hang of it. We did notice that the phone's fancy Map app took a while to launch and stuttered a bit when we tried the "Here" augmented-reality function.

Forty-one megapixels amounts to a lot of captured information, more than most people can and will really use, but -- as with the Symbian-birthed Nokia 808 PureView before it -- the Lumia 1020's higher megapixel count translates into a 5-megapixel image with lossless zooming for higher-quality cropped photos.

In the Lumia 1020, Nokia is extending this "oversampling" method to video as well, which could mean some really high-fidelity HD captures when you zoom in. It isn't just about images with Nokia. Audio technology that Nokia calls "rich recording" promises to capture clear, distortion-free sound even in loud surroundings.

Design and specs
Of course, the matte white, black, or yellow Lumia 1020 is more than just a camera. Toss the large, round shooter module aside and it looks a lot like the Lumia 920 phones, both in terms of the squared corners and rounded spines, and also its guts.

Close up, there are a few differences between the two handsets. When we got a chance to handle the new Lumia 1020 in the flesh, the phone certainly impressed with its build quality and premium feel. Like its predecessor's, the 1020's chassis is a unibody piece molded from high-quality polycarbonate. It also sports similar smoothly rounded edges and a slightly curved back, making it comfortable to hold.

The Lumia 1020 is slightly thinner and lighter than the Lumia 920; that's no mean feat considering the enormous camera. The back of the 1020 also uses a soft-touch coating that feels less slippery than the 920's often-glossy back surface.

The screen on this 4G LTE smartphone has the same familiar 4.5-inch AMOLED PureMotion HD+ display with a 1,280x768-pixel HD display and a 16:9 aspect ratio. Nokia's Clear Black filter lies on top for cutting down outdoor glare. As with the new guard of Lumia phones, this 1020 has an ultrasensitive touch screen that you can operate with your fingernail or gloved hand; the 1020 is new enough to get Gorilla Glass 3 as its topper.

Above the display, a 1.2-megapixel wide-angle front-facing camera sits at the ready to capture shots and HD video.

The 1020 runs on a 1.5GHz dual-core Qualcomm Snapdragon S4 processor, and has 32GB of internal memory, supplemented by 7GB of SkyDrive cloud storage, courtesy of Microsoft. The phone is sealed in typical high-end Lumia fashion, so there's no expandable memory, though 32GB is a healthy helping.

Nokia has managed to keep the phone fairly thin, coming in at 0.4 inch like the rest of the Lumia line.

Although the Lumia 1020 will not come with wireless charging built in, you can buy an aftermarket charging cover. You can also pick up a camera grip made for the phone for $79.

Turning up the heat
With its 41-megapixel camera, Nokia's Lumia 1020 absolutely brings the wow factor, proving that Nokia can innovate in its own way, that it is a mobile force to be reckoned with.

Nokia has certainly made good on its promise to produce Windows Phone devices at every price point. Yet with the Lumia 1020 being unveiled so soon after the Lumia 925 global flagship and Verizon's 928 variant, Nokia is now out and out flooding the market.

Still, it's hard not to get excited about a modern smartphone powerful enough to replace your point-and-shoot, and possibly even your dSLR. The $300 asking price is a high one; we haven't seen costs like this for some years. However, Nokia is betting on folks seeing the value of a true two-in-one device and making an investment.

I'd bet on those prices certainly coming down as the months progress, particularly around the holiday season. But before then, we'll have plenty of time to see just how this PureView camera handles.