Ecobee's next-gen thermostat looks a lot like the Ecobee4, but has some significant upgrades.

Megan Wollerton covers renewable energy, climate change and other environmental topics for CNET. Before starting at CNET in 2013, she wrote for NBC Universal's DVICE (now SYFY). Megan has a master's degree from the University of Louisville and a bachelor's degree from Connecticut College, both in international relations. She is a board member of the Louisville chapter of the Society of Professional Journalists. When Megan isn't writing, she's planning far-flung adventures.

The SmartThermostat with Voice Control is Ecobee's new high-end smart thermostat. At $249 (including one temperature sensor), the price is steep, but Ecobee gave this model some additional smarts that make it worth considering. The Ecobee4 will continue to be sold for $249 as long as supplies last, and while the new model isn't the most dramatic upgrade over the previous one, it has the following additional features that make it more compelling:

The Ecobee SmartThermostat adds features to its built-in Alexa speaker. It has a redesigned temperature sensor and works with Google Assistant and Siri -- all for the same $249 price.

Depending on where your thermostat is located in your home, it might not be in an ideal place for an Alexa speaker.

Ecobee's SmartThermostat is a solid device that's well worth considering if you want a connected thermostat with a built-in Alexa speaker.

You can't see the majority of these things by looking at the Ecobee SmartThermostat, but they do make it easier and more enjoyable to use overall.

If you already have the Ecobee4, I wouldn't run out and buy this model, since they're very similar. But if you're interested in a solid smart thermostat with a fully functioning built-in Alexa speaker, Ecobee's latest iteration is your best bet -- and the reason I gave it an Editors' Choice award.

A brief history of smart thermostats

Ecobee was among the first of the smart thermostat makers. Now in its fifth iteration with the SmartThermostat with Voice Control, Ecobee is Nest's key competitor in the industry. While Nest dazzled customers with cool design when it introduced its first smart thermostat in 2011, Ecobee quickly moved ahead in terms of features, offering a remote temperature sensor before Nest and innovating more quickly with features like a built-in Alexa speaker.

But even more than the Nest, the SmartThermostat with Voice Control is really competing with its predecessor, the $249 Ecobee4. Let's see how they compare.

I didn't notice any significant differences between the design of the Ecobee4 and this new SmartThermostat model. Both have the same rounded square shape, which Ecobee calls a "squircle," both have a glossy black faceplate -- and both have an LCD screen.

Ecobee tells me the Ecobee4 had a plastic faceplate rather than this model's new glass finish, but again, I couldn't really tell, even when I tapped on the new display to make a selection; it looks and feels the same.

That said, I did notice improved touchscreen responsiveness. All the selections I made on the thermostat screen itself worked on the first attempt, never requiring two or three tries. I can't say the same for some previous Ecobee thermostats I've tested.

The SmartThermostat also works with 2.4GHz and 5GHz Wi-Fi, whereas the the Ecobee4 only worked on 2.4GHz networks. This is great news for folks with dual-band routers, but it didn't make a significant difference in my testing. In a reviewers guide Ecobee sent me, it said this dual-band Wi-Fi support should allow for "faster and more reliable network connectivity," but I noticed no great difference. I connected to our 2.4GHz network, as I have while testing previous smart thermostats and the result was the same -- a responsive, reliably connected thermostat.

The Alexa features added to the SmartThermostat help distinguish it from the Ecobee4 more than any other changes. That starts with the digital microphones Ecobee put in this new model, versus the analog microphones in the Ecobee4. This upgrade makes the SmartThermostat better at hearing you, including offering Echo Spatial Perception or ESP at launch. ESP means that when you say "Alexa" to begin a voice command, only the closest Alexa speaker responds.

ESP worked well for me during my testing. Note: The Ecobee4 has ESP too, but it wasn't available at launch.

The SmartThermostat has better sound quality, too. Not only does that mean your interactions with Alexa will be easier to hear, but also that you can reasonably use the SmartThermostat to play music, podcasts and so on.

Of course, whether it makes sense (or not) to listen to music from your thermostat will largely depend on where it's installed. My thermostat at home, for example, is in a random hallway -- it definitely isn't a spot where I'd want to play music. But if your thermostat is installed in a more open area, an Ecobee SmartThermostat could be your go-to for playing podcasts while you cook, asking questions about the traffic or the weather and controlling smart home devices, all with simple Alexa voice commands.

While the SmartThermostat can do a lot more with its built-in Alexa speaker than the Ecobee4, it can't do everything an Amazon Echo device can. Specifically, you can't change the wake word from Alexa and it doesn't work with Alexa Guard. Alexa Guard is a software feature that makes it possible for Echo speakers to listen for glass breaking, alarms and other potential security breaches.

The Alexa, Google Assistant and Siri voice integrations all did a good job adjusting the SmartThermostat via voice commands. I asked Alexa, Google and Siri to change the temperature or for the current temperature in the room and got accurate responses every time.

Ecobee also redesigned its temperature sensor. It does look a bit different, but I didn't notice any major changes in how it operates. This remote sensor helps you keep track of the temperature in a different area of your home, so you can customize whether you want to heat or cool based on the temp sensor inside the thermostat -- or based on the temp in your basement, nursery or another room.

Ecobee's remote sensor also helps determine whether you're home or away so it can override a schedule to autoswitch the mode for you. Ecobee says this new sensor has an "enhanced wide-angle detection range," but it performed roughly the same for me during testing as Ecobee's last-gen sensors. This version provided the temperature and switched the thermostat's mode based on whether or not it detected a person's presence.

One sensor comes with your purchase and you can buy a two-pack for $79.

As Ecobee's new high-end thermostat, it competes directly with the $249 Nest Learning Thermostat. Unlike Ecobee, Nest hasn't changed its flagship Learning Thermostat much over the years, aside from some cosmetic updates and the introduction of a remote sensor that only detects temperature.

The Nest is far behind Ecobee in terms of features, although I still prefer the Nest thermostat's design.

16 smart thermostats to regulate your home's heat and AC

Should you buy an Ecobee SmartThermostat? That depends.

If you already have the Ecobee4, there isn't enough of a difference to make the upgrade worthwhile. But, if you're considering splurging on a thermostat with a built-in Alexa speaker, the $249 Ecobee SmartThermostat with Voice Control is a great choice.

The glass faceplate, responsive touchscreen and fully functioning Alexa speaker all make the SmartThermostat even better than the already-great Ecobee4.

This model will be a tough sell if you don't want a smart speaker in your thermostat, or if $249 is over your budget. In either case of those cases, I'd suggest the $169 Nest Thermostat E or the Ecobee3 Lite (also $169). 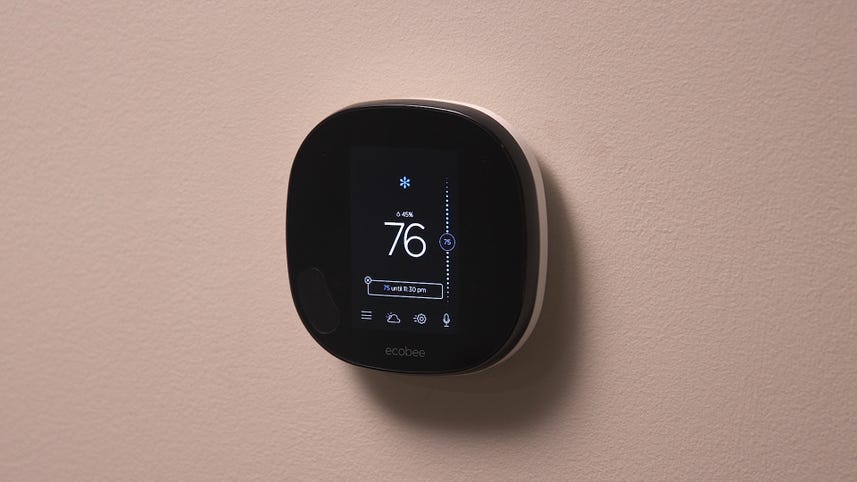 Performance 8Usability 8Features 9Design 7
See all prices
Get the best price on everything
Shop your favorite products and we’ll find the best deal with a single click. Designed to make shopping easier.
Add CNET Shopping