Microsoft's premium noise-canceling headphones stack up pretty well against leading models from Bose and Sony, but could cost a little less.

Executive Editor David Carnoy has been a leading member of CNET's Reviews team since 2000. He covers the gamut of gadgets and is a notable reviewer of mobile accessories and portable audio products, including headphones and speakers. He's also an e-reader and e-publishing expert as well as the author of the novels Knife Music, The Big Exit and Lucidity. All the titles are available as Kindle, iBooks, Nook e-books and audiobooks.

When Microsoft introduced its new $350 (£330) Surface Headphones alongside its fall 2018 Surface PCs, people were a little surprised. Microsoft doing headphones? It didn't seem as odd as it sounds, because, well, everybody seems to be doing headphones these days. But how good could they be? Or rather: Could they compete with top noise-canceling headphones from Bose and Sony, which also happen to cost around $350?

The Microsoft Surface Headphones are comfortable to wear, sound good, have touch controls and on-ear dials that allow you to adjust the level of noise canceling and volume. The always-on Cortana feature allows you to use voice commands without pressing a button first. They worked well for making calls, noise canceling is effective and there's USB-C charging.

Sound could be better for the price, and battery life doesn't measure up to that of competing models. Cortana isn't as good as Alexa and Google Assistant.

The Surface Headphones don't quite match Bose and Sony noise-canceling headphones, but they're a strong freshman effort with some compelling feature and design elements.

Before the Surface Headphones were officially launched, I got a sneak peek at them out at Microsoft's product development labs in Redmond, Washington, and was mostly impressed. The first thing that became clear, and that Microsoft wanted to make clear to me, was that this wasn't some hastily organized project where Microsoft slapped its brand on headphones it dug up from some partner in China.

The Surface Headphones were designed in-house over three years by a large team of designers and engineers. And in case I wasn't already aware, Microsoft has a world-class industrial design facility and a bunch of labs to test products as it builds and refines them. Some of those facilities you can see in the video we shot (above), others I was able to tour but we weren't allowed to film.

Microsoft Surface Headphones from all angles

There's some debate over how attractive the Microsoft Surface Headphones are, with some people liking their look and others not being so fond of it (I fall somewhere in the middle). However, for the most part, they are what you'd hope for in a premium noise-canceling headphone.

For starters, they're very comfortable to wear. The ear pads are plush and the headband is nicely tapered to your head without putting too much pressure on it. They weigh in at 290 grams (10.2 ounces), which doesn't make them as light as the Bose QuietComfort 35 II (234 grams) or the Sony WH-1000XM3 (254 grams), but they didn't feel heavy on my head and seemed sturdily built.

One of the Headphones' key features is an integrated dial in each ear cup. You turn the ring on the right ear cup to adjust volume and the one on the left to adjust the amount of noise canceling you want. The dial turns smoothly -- a lot of design work went into it -- and there are technically 13 levels or "points" of noise canceling. (Microsoft has some previous experience with dials, having created the Surface Dial for the Surface Studio PC a couple of years ago.)

There are touch controls on the earcups -- the touch area is about the size of a quarter -- that allow you to pause and play your music, answer and end calls with a tap, and skip tracks forward (two taps) and back (three taps). I found the touch controls worked well and were responsive while not being too sensitive. It's also worth mentioning that when you take the headphones off, your music automatically pauses and resumes playing when you put the headphones back on.

You can max out noise canceling to muffle the outside world or dial it back to the point of letting ambient sound into the headphones, allowing you to, say, talk to a flight attendant on a plane without taking your headphones off. The noise canceling seemed quite effective -- close to the same level as Bose's and Sony's.

Microsoft says the headphone is equipped with eight microphones, including four beamforming mics (two on each ear cup) that not only help with making your voice sound clear on calls but issuing voice commands using Microsoft's Cortana digital voice assistant. Cortana is always on, so all you have to do is say, "Hey, Cortana" to issue a voice command. Typically you have to push a button to activate the voice assistant on your headphones, whether it's Alexa or Google Assistant. But this hands-free mode is similar to the experience you get with voice-enabled Wi-Fi speakers, such as the Amazon Echo.

This is one of the headphone's distinguishing features and from my initial tests with a beta version of Cortana 3.0 for iOS (there's also an Android app and Cortana is built into Windows devices), it's kind of cool but can be hit or miss and underwhelming.

First, you have to the Cortana app running in background. Sometimes it seems like it's running but it isn't. You then say, "Hey, Cortana," wait a beat for a beep, then issue your voice command. It worked fine in a lot of instances -- I asked it what the weather was in various cities, for the latest news (I received an NPR podcast) and the daily schedules for the NBA and NHL. I also composed some text messages (you have to touch your screen to actually send the text) and made some calls (you have to touch your screen to dial the number). But sometimes Cortana didn't respond. It's also worth mentioning that there's no Spotify support yet (it's coming soon), so you can't control music playback with your voice if you use Spotify.

As you'd expect, the Microsoft Surface Headphones are designed to work with Surface computers, but they also work just fine with other mobile Bluetooth devices, including the aforementioned iOS and Android phones as well as Apple Macs (however, there's no Cortana for MacOS). The headphone is equipped with Bluetooth 4.2, not the latest Bluetooth 5.0, but you can connect multiple devices to it and swap between them easily. (I didn't try this but I'm taking Microsoft's word that you can.) It also charges via USB-C, which is useful, and has a quick-charge feature that gives you one hour of music playback from a 5-minute charge.

I thought the headphones sounded quite good, but not as good as the Sony WH-1000XM3, the current top-rated product in this category, and they didn't beat the Bose QuietComfort 35 II either. According to Microsoft, they've got 40 millimeter low-distortion Free Edge drivers. There's a presence boost in the treble along with a bass boost to create that punchy, exciting sound that's typical of many of today's headphones. The midrange is a tad restrained (lacking definition and being slightly recessed) and the headphones aren't as open as one might hope.

Overall, I found the headphones pleasant to listen to -- as I said, they sound quite good -- but they're lacking wow factor in the sound department. I didn't suddenly want to cue up all my favorite tracks in my music library to hear what they sounded like through the headphones, which is an urge you get with certain cans.

Battery life is rated at 15 hours, which isn't nearly as impressive as the battery life numbers of competing models. If you turn Bluetooth off and plug in the included cable, you can get up to 50 hours of music playback, but I suspect that people will mainly want to go into wired mode on a plane.

The always-on, hands-free Cortana feature does eat into battery life, Microsoft reps told me, although just how much they didn't say. As of now you can't turn it off, though it appears you'll be able to mute the mics for privacy. Perhaps in the future it will tweak the Cortana hands-free setting, but at launch the company is highlighting hands-free Cortana voice control as a key feature that sets the headphone apart from competing models. 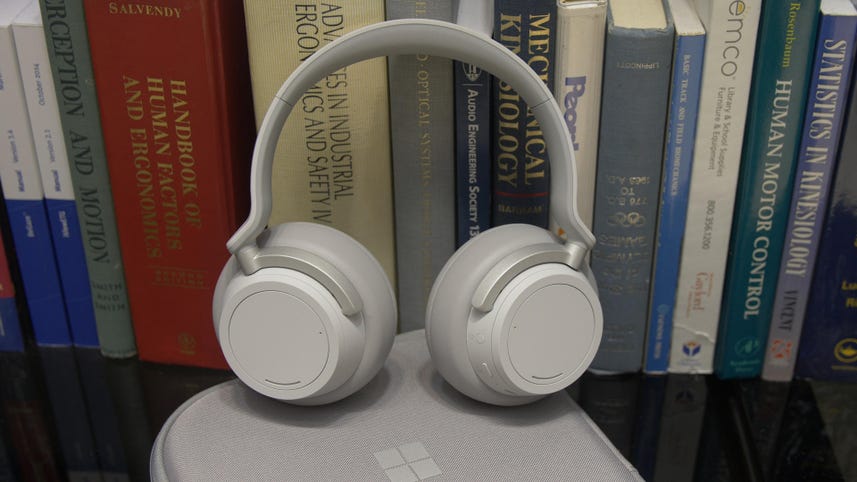 Ultimately these are comfortable headphones with some compelling features, including effective noise canceling, those dials for easily controlling the levels of noise noise-canceling and volume, USB-C charging and that always-on Cortana feature that should get better with time. I also thought it performed well as a headset for making calls.

The one knock against it is that it doesn't really distinguish itself from a sound standpoint. There are several noise-canceling headphones that sound as good or better at this price (or less), including the aforementioned models from Bose and Sony, as well as the Beats Studio3 Wireless, AKG N700NC and Sennheiser HD 4.50.

I could say something trite like, "This is a good first effort for Microsoft," but the Surface Headphones are more than that. They are a contender, but they just need to cost a little less to make them easier to recommend buying over a superior headphone like the Sony WH-1000XM3.