Not to be confused with the earlier HP Slate Pro 8, this Android-powered enterprise tablet comes packing a high-resolution display, metal body and ultrasound stylus.

BARCELONA -- Announced in January of this year, this meant-for-enterprise tablet from HP may not seem like something meant for the office given its beautiful looks. It's not what you'd expect to find in a workplace environment, given its sleek industrial design that seems more at home for consumers.

Be that as it may, the HP Pro Slate 8 (not to be confused with the earlier HP Slate 8 Pro) weighs just 350g (just over 12 ounces) and feels ridiculously light in the hand despite its metal body. As the name suggests, the tablet sports an 8-inch display, and a super-high-resolution one at that, boasting 2,048 x 1,536 pixels. If this sounds familiar, it's the same resolution as Apple's Retina Displays on its iPads.

Powered by a 2.3GHz Qualcomm Snapdragon quad-core processor, the tablet also packs 2GB of RAM and 16GB of onboard storage. It has a battery life of around 13 hours on its 21 Whr battery. It runs Android 4.4.

Now the specs may sound pretty mundane, but it's an enterprise tablet after all, so HP has added a docking port that lets you use the tablet with a keyboard and mouse. It will also be able to super-charge the tablet quickly -- HP says it takes about one and a half hours to get to a full charge.

The coolest feature, however, has to be the ultrasound stylus, dubbed the Duet Pen, that you can also use as a pen (the nib can be pulled out and flipped around). Positioned around the tablet are five microphones that work to triangulate the position of the pen, with the fifth microphone used to detect vertical movement.

With the 8-inch tablet, you can also write on a nearby notepad, and your words will be mirrored on the tablet, making it easy to digitize your stuff. Check out the video for a demo on how it works.

Watch this: HP Pro Slate 8's ultrasound stylus is perfect for those who love to write instead of type
02:29 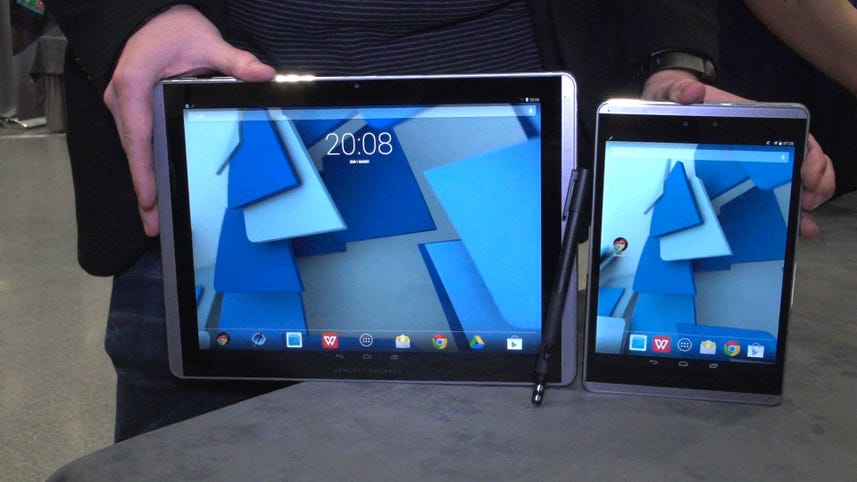 HP Pro Slate 8's ultrasound stylus is perfect for those who love to write instead of type
2:29
Watch Now