In 2016, Google showed off its first smart speaker, the Google Home. A year later, its puck-size sibling the Google Home Mini arrived. Small but mighty, this speaker came with all the smarts of Google Home but at an affordable $49.

You still can't connect the Mini to larger speakers via auxiliary cable, and there's no digital display like Amazon's newest Echo Dot has.

If you're a fan of the Google Home Mini, the Nest Mini offers a very similar experience with a handful of improvements and new features at the same affordable price.

With Google and Nest back under the same roof, the second generation of the Google Home Mini is called the Google Nest Mini. At first glance, it looks just like its predecessor, but a handful of new features make the still-$49 (£49, AU$79) Nest Mini an even better value.

The Nest Mini looks very similar to the Google Home Mini, and that's on purpose. Google didn't seem keen to fix what wasn't broken, and you'll get a nearly identical aesthetic placing the Nest Mini around your home. There are four colors, swapping the Home Mini's teal, which was called aqua, for a darker, gray-blue shade called sky. The coral, charcoal and chalk colors still remain.

On the outside of the speaker, you'll find the same muting switch as before. However, there's now a DC power jack instead of the Micro-USB that powered the Home Mini, so don't assume your old Home Mini power cords will work interchangeably with the Nest Mini.

The team at Google spent hours testing the audio transparency of dozens of fabrics to create a more eco-friendly cover for the Nest Mini. The speaker's top fabric is made from 100% recycled plastic, and the external enclosure is made from 35% recycled plastic. Google told me that one half-liter plastic bottle makes enough fabric to cover a little bit more than two speakers. That's a small design detail that could tip the scales for an environmentally conscious consumer trying to decide between the Nest Mini and an Echo Dot.

You'll also get a wall mount on the back of this new smart speaker, something Google said was inspired by all the different ways users are placing, mounting and attaching smart speakers to surfaces in their homes. Ironically, the company that's created the perfect way to mount your smart speaker as a wall clock isn't the company with a clock display on its smart speaker. That title goes to Amazon and the new Echo Dot with Clock.

While the Nest Mini looks nearly identical to the Google Home Mini, there are plenty of updates inside.

The Google Home Mini has two microphones for recognizing your voice across the room. The Nest Mini has three to improve that far-field detection. In my testing, the third mic did increase the range at which the assistant could hear me, and it did particularly well at hearing me over music playing from other speakers nearby. Of course, a lot of that will depend on your home's acoustics and layout.

The microphones are also making use of a new feature Google calls ultrasound sensing. The speaker emits tiny inaudible chirps, which bounce off objects in the environment, reflect back to the microphones and tell the device if someone is near. This is turned on when music is playing, but you can opt out of it if you like in the Home app. There's also the option to call your home speakers from the Home app if your mobile device has Google Duo installed.

With ultrasound sensing enabled, two LEDs will illuminate when you hover your hand over the Nest Mini to show you where the volume adjustment touch points are on each side of the speaker. That's a thoughtful add given that I've always had trouble finding the touch controls on the Google Home Mini. Touch controls for playing and pausing music are on top.

The Google team also redesigned the speaker inside the Nest Mini, making it larger and just a bit heavier with more space around the components to create a fuller bass sound.

Inside the Nest Mini is a machine learning chip with up to one TeraOPS of processing power. This chip helps the speaker learn which commands are commonly repeated so it can respond to them without needing the cloud at all. Let's say you turn on your kitchen lights or ask to play a specific song every day of the week at the same time. The Nest Mini learns those actions, stores that data locally and processes those commands without sending any information to Google's servers.

This is part of Google's push toward what the company calls "ambient computing," the idea that your Google-powered smart home can begin to anticipate your needs. Ambient computing reduces how often you need to talk to your smart speaker to get information, making your assistant a more behind-the-scenes, seamless part of your home.

One of my favorite updates to the Nest Mini is ambient IQ. When you're listening to news, podcasts or other audio streaming where people are talking (it doesn't work with music), the Nest Mini can adjust for ambient noise in the background, like an exhaust fan in the kitchen.

I tested this out with a hairdryer, and the Nest Mini automatically upped the volume as soon as I added that extra noise. The feature doesn't work with music, but it's one of those tiny updates that makes it feel like Google is really trying to solve those mundane, annoying moments in everyday life.

On the music front, Google's redesigned speaker promises to deliver twice the bass of the Home Mini. There's still a 40-millimeter driver powering the speaker, but more extra space between components gives the bass a definite boost. The latest Echo Dot still produces more sound at each volume level, but it feels distorted and busy compared with the Nest Mini, especially at higher volumes.

That's a tough question to answer these days. Both speakers have evolved into very good, affordable products. In terms of sound, the Nest Mini delivers a bit more clarity and the Echo Dot a bit more punch. I wouldn't let sound be the deciding factor on these smaller, budget-friendly speakers.

The Nest Mini comes in four colorful options, while the Echo Dot comes in varying shades of gray. The Echo Dot with Clock will cost $10 more than the Nest Mini and you won't be able to mount it on your wall (at least not without some creativity). However, you will get a practical LED display and the tactile joy of whacking the top of a smart speaker to snooze the alarm.

You can play and pause music via touch controls on the Nest Mini, but the Echo Dot offers the option to connect to a larger speaker setup easily with a 3.5mm cable. Both speakers can be paired for stereo sound.

Of course, some services are platform-specific. The Nest Mini has Chromecast capability built in, so you can start shows on your TV with your voice. Streaming directly from YouTube Music works only on Google's smart speaker. If you use Amazon Music, you should stick with the Echo Dot. Google did recently announce the addition of Apple Music to its streaming music providers, so if you're a subscriber to that service both Google and Amazon devices will work for you.

For me, Google's Nest Mini just edges out the Echo Dot. I think Google Assistant is better at answering life's everyday queries, and the Home app is easier for setting up and managing smart home devices. With better sound than the Home Mini and a new machine-learning chip for faster responses, I'd recommend the Nest Mini if you're not yet firmly in one voice assistant camp.

What it's still missing

A lot of audio and smart home enthusiasts were hoping for an auxiliary jack for audio output on Google's new smart speaker, but it doesn't have one. You could use a Bluetooth adapter plugged into the auxiliary jack of your other speakers, but I doubt many consumers would go to the trouble.

Google gave us more LEDs, but no added functionality for the ones that were already there. You won't get the clock option on this smart speaker, even though you can now hang it on your wall. Sure, nobody probably wanted a clock option until we saw it on the latest Echo Dot, but now that it's out there, that feature could be a deciding factor for some consumers.

Aside from those minor, niche wishlist items, Google delivered an improved speaker. Keeping it at the affordable $49 entry-level price makes the Nest Mini an even better value than the Google Home Mini that came before it. The Google Home Mini was a great first smart speaker for anyone looking to add Google Assistant to their homes without spending a lot, and the Nest Mini is even better. 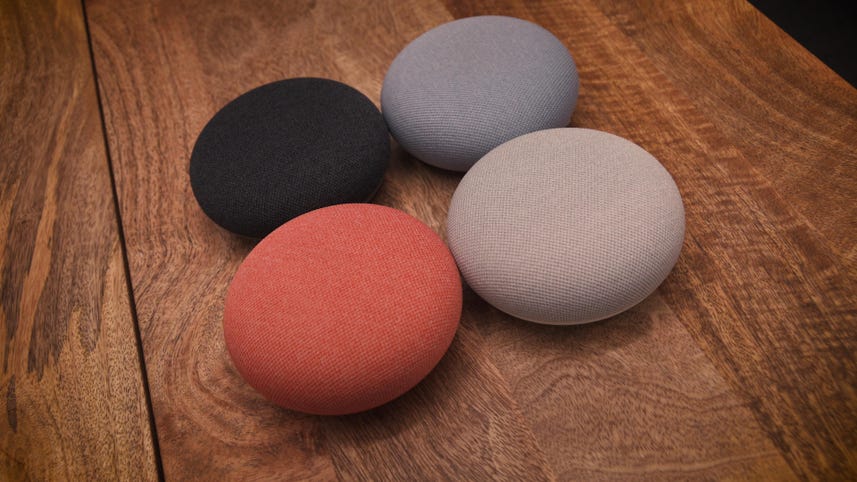 Google didn't totally redesign the Nest Mini. Amazon hasn't totally redesigned the latest Echo Dot, either. It looks like both companies are seeing the value in their existing designs and adding small tweaks and features to improve upon what they've already built.

Ultimately, your smart speaker decision is probably going to be heavily skewed by which assistant you want in your home. You won't get the premium sound of the larger Echo speakers or the Google Home Max, but if you want Google Assistant powering your smart home at a great price, I'd fully recommend the Nest Mini.