Google Daydream View review: The easiest-to-use VR headset yet is affordable but imperfect

For $79, £69 or AU$119, the Daydream View turns the Google Pixel phone into a capable entry-level VR headset -- with caveats.

Cardboard is cheap. Gear VR only works with Samsung phones. The pricy Oculus Rift and HTC Vive require an expensive gaming PC and loads of setup, and the PlayStation VR needs a PS4.

Affordable, portable and easy to set up. The bundled motion controller is convenient and easy to use. Exclusive YouTube, Google Street View and Google Photos feel like potential killer apps.

It only works with Google Pixel and Moto Z for now (more on the way). The headset is front-heavy and frequently needs adjusting. There's limited app selection at launch and you can't walk around or grab things in VR.

The Daydream View is the simplest, most affordable way to turn a phone into an immersive VR headset.

It's a soft cloth eyebox that turns any compatible phone into a VR headset, and it comes complete with its own Wii-like motion controller for manipulating objects and menus in VR.

It's the easiest VR to use by far.

But does that mean you should run out and buy one? Not necessarily. Not yet, anyhow.

One of the pitfalls of most VR is the number of cords, ports and things you have to adjust. The Daydream View puts them all to shame. Here are the steps to set it up:

That's it. No adjusting the lenses, no fiddling with pairing procedures, no ports or cables to plug in. The phone automatically pairs with the headset and adjusts the screen to the correct position, like magic. You can put them on over your glasses with little difficulty, too.

Once you're inside, the included motion controller makes navigating menus a breeze. Just point where you want to go, and a little mouse cursor follows your motion quickly and accurately.

When I handed the Daydream View to my colleagues, many of them instinctively put it on the wrong way. The curved straps are supposed to rest on top of your head (like a crown) but it's tempting to cinch them down like a pair of ski goggles -- which isn't terribly comfortable.

Watch this: You're wearing it wrong! How to adjust Google's Daydream headset
01:10 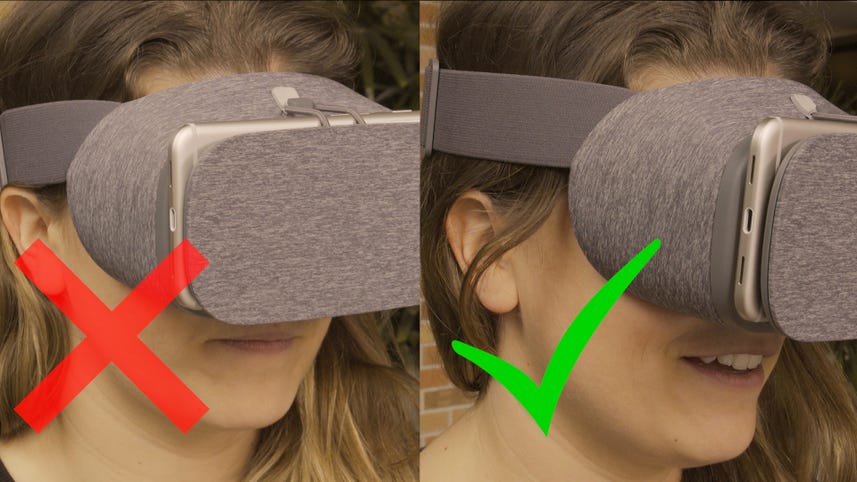 You're wearing it wrong! How to adjust Google's Daydream headset
1:10
Watch Now

And though the Daydream View is almost entirely made of soft, cushiony fabric instead of hard plastics, that didn't stop my wife and colleagues from complaining how front-heavy it was with a large Pixel XL phone inside. Even if it weighs less than a pound (roughly 0.85 lbs with the phone) there's still potential for neck strain over time.

The image quality is good -- I definitely felt like I was somewhere else! -- but it's not going to fool anyone who doesn't want to be fooled. It lets a little bit of light in the edges unless you've got a very wide head. And I often found I had to recalibrate the headset and controller in the middle of a session (it's easy -- just hold down the home button).

I even found a bug that makes VR totally unusable until I reboot the phone -- though I understand a software fix for that is coming soon.

Here's the rub: unless you have a Google Pixel or other Daydream-certified phone, the Daydream View won't work at all. That's by design: Google's pitch is that Daydream can keep you from getting sick in VR by ensuring both phones and apps meet a certain quality standard.

But that means a murky future for Daydream, because we honestly don't know how many phone manufacturers and app developers will wholeheartedly support Google's new platform -- or if the results will be as good as these preliminary ones. Even the 5-inch Pixel offers a lesser experience than the 5.5-inch Pixel XL, because its screen is lower-resolution.

We tried another upcoming Daydream phone, the Huawei Mate 9, only to find out it may not be Daydream-ready until next year.

Update, January 2017: Google has extended support to the Moto Z, and soon the ZTE Axon 7. The Asus Zenfone AR and Huawei Mate 9 Pro (not the Mate 9) will also support Daydream. Check out our chart comparing all the Daydream phones.

While Google is promising 50 apps by the end of the year -- including Netflix, a Harry Potter experience, a Need for Speed racing title and a viewer for live NBA games -- reviewers like me only got to try 10 apps ahead of launch:

To be honest, it's not a big enough selection to really grasp what Daydream is capable of -- particularly if you're a gamer. Even as I marveled at how I could look around the hellish environment of Hunter's Gate or Wonderglade's cartoony amusement park just by turning my head, their unimpressive graphics and slow, repetitive gameplay bored me after just a few minutes.

The Wall Street Journal app is a fascinating way to visualize how the economy is doing -- you use the touchpad to rotate a holographic table which turns each majorly traded company's share price into a 3D bar graph, and consume a small selection of articles and videos -- but I'm not sure even regular traders would care for such a small, generic slice of info instead of something tailored to their specific portfolios.

Google Arts and Culture is a great idea -- visit art galleries in VR -- but the screen resolution of even the Pixel XL wasn't enough to appreciate the fine detail in paintings like the famous "A Sunday Afternoon on the Island of La Grande Jatte."

And while it's neat to be able to watch a rented movie in VR, the Google Play Movies app (a single, relatively small screen) is far from the best way I've seen to do it.

Thankfully, we should get to try more apps soon: Google is promising 25 apps on day one. Update: Here are our thoughts on the best apps so far.

And there is one reason you might want to pick up Daydream right away: virtual teleportation.

I'm in India, staring up at the Taj Mahal -- white marble columns glistening in the sun.

I'm in San Jose, California on a beautiful day, admiring the blue skies. Outside my home, I hear the familiar sound of cars whizzing by.

I'm in London, exploring the roads I didn't travel when I was there on vacation. I just wave my magic wand, and teleport where I want to go.

Daydream is the only VR headset that lets you explore the world from your phone using YouTube, Google Street View and Google Photos. It's the coolest thing you can do by far.

While you can watch any YouTube video in Daydream (with keyboard or voice search), YouTube 360 videos can let you swim with dolphins or get up close to your favorite YouTube stars. With Google Street View, you can type in any street address. Go visit your childhood home, then keep "walking" around your neighborhood.

Sure, you can't smell the smells or hear the sounds -- you're visiting a frozen moment in time -- or go anywhere Google's cameras haven't gone, but at least you can explore the streets and landmarks of far-away places without leaving your room.

Better still, Daydream can let you view frozen moments that you capture yourself. I captured that moment in San Jose all by myself using Google's Cardboard Camera app -- just by slowly spinning my phone around -- and a minute later, Google's servers turned it into a 3D, 360-degree complete with the ambient audio of the cars zooming down the freeway. (You view them in the Google Photos app.)

If you haven't yet bought into VR, the Daydream View could be the best way to get started -- but as of today, we've simply can't say for sure. Google says there'll be 25 apps live today and 50 by the end of the year -- plus a wider array of compatible phones -- but we've only tried 10 of them on a Google Pixel.

If you already own a Google Pixel and love the idea of exploring the world, it already feels like a solid purchase. I'd love to get one for my grandma so I could capture some of my favorite places with the Cardboard Camera app and share them with her.

But if you're already a VR enthusiast looking for the most immersive experiences, you should know that the Daydream may never be anywhere near the level of a HTC Vive, Oculus Rift or PlayStation VR.

While the bundled motion controller is handy, Daydream doesn't really push the immersion level much past Samsung's Gear VR, and you still can't walk around or grab things due to hardware limitations. For full-fat VR, we currently recommend the Sony PlayStation VR -- or the HTC Vive if you've got a slightly bigger budget.

We'll revisit this review when more Daydream apps and devices are available.

Immersion 8Interaction 8Comfort 7Ecosystem 5Setup 10
See all prices
Get the best price on everything
Shop your favorite products and we’ll find the best deal with a single click. Designed to make shopping easier.
Add CNET Shopping