The most comfortable VR headset yet, but not the best.

"I could wear this for hours."

It's not the first thing I think after strapping myself to a VR headset. I've tried dozens and generally my thoughts range from "Why won't it stay on my face?!?" to "Maybe I'll get used to this someday."

Google's Daydream View, updated for 2017, is the exception to the rule. It's the most comfortable headgear I've worn. I explored an alien world for two hours straight on Saturday, and watched a full-length Netflix movie inside the headset this Sunday. And honestly, I could have kept going.

And this might surprise you: if you choose the Pixel 2 phone, I don't think the new Daydream View is a good choice for you. (Spoiler: It's the screens, but I go more into it down below.)

You know Android, the Google operating system that powers over 80 percent of the world's phones? Daydream is Google's plan to build the Android of virtual reality. Any manufacturer can make a Daydream-compatible phone and stick it into a Daydream-compatible headset. Unlike Samsung's Gear VR, which only works with Samsung phones, Daydream devices are interoperable.

Google provides the underlying software that makes it all work, and builds a few devices to set a good example, just like it does with Android. Case in point: The new Daydream View, the unusually comfortable fabric headset that I'm reviewing here.

I can't overstate how much more comfortable the new Daydream View really is. I used the original headset and this new version side-by-side, swapping back-and-forth, and found the new headset doesn't dig into my cheekbones like the original. With a new top strap, it's far better balanced across the entire head, with less light leaking in -- and unlike many headsets, the lenses didn't fog up on me once.

And importantly, for the average user, it's way easier to figure out how to put it on. I made an entire video to explain how the original Daydream View's straps should sit on your skull. That's not a problem anymore. It still doesn't fit over glasses, but several colleagues told me the fit was better than the original.

Still, the new Daydream View doesn't really move the needle technologically. The included controller is still a neat way to aim a gun, steer a car or point like a mouse, but you can't reach out and grab. You still can't use phone-based VR on a bus, train or plane because those motions fool the sensors that keep your view stable, and VR is still a huge drain on your phone's precious battery. Immersion-wise, you get a slightly larger field of view, but that's about it.

Not a ton to do in Google's VR

Daydream has over 250 apps a year in since 2016, but there still doesn't seem to be a ton of interesting stuff. Samsung's Oculus-powered Gear VR has a deeper app catalog in comparison. I'm currently testing to see if I can find some gems, but I'm pretty sure YouTube VR, Google Street View (virtual sightseeing!) and movies from Netflix, Hulu and Google Play are still the primary draws.

This is still a gadget that you'll be using sparingly, probably on your own couch or swivel chair at home, even if the headset feels comfy.

Warning: Some phones work better than others

But the most surprising thing I discovered about the new Daydream View is: Not every Daydream-compatible phone makes for a great experience.

You'd think Google's own flagship Pixel 2 and Pixel 2 XL phones, announced alongside the new Daydream View, would be the best choices, no?

Not so much -- because the 5-inch Pixel 2 comes with a small, comparatively low-res 1,920x1080-pixel display that doesn't look good when blown up by the Daydream View's lenses. It suffers heavily from something VR experts call the "screen door effect," where it feels like you're looking at everything through a fine mesh. It looks worse than the same phone does on the original Daydream View.

The 6-inch Pixel 2 XL, meanwhile, uses an LG-sourced OLED display that produces annoying ghostly afterimages near dark objects -- way more than with other phones I tested.

Ironically, the phone that's working the best for me so far is Samsung's 5.8-inch Galaxy S8, which added Daydream support earlier this year. It's just large enough to take full advantage of the headset's field of view, crams in enough pixels to minimize the screen door effect, and keeps the ghosting to a minimum. But if you own a Galaxy S8, you can also choose Gear VR. And, right now, Gear VR might be the better choice unless you crave Google apps.

The jury is still out

I'm still testing the new Daydream View with more phones, more apps and games, and more YouTube VR in particular to see if there's a killer use I missed. And I need to do more tests against its primary competition, the Samsung Gear VR.

But I'm pretty sure my advice will be the same as last year: Wait.

Watch this: Google's Daydream View is way better than Cardboard
02:02 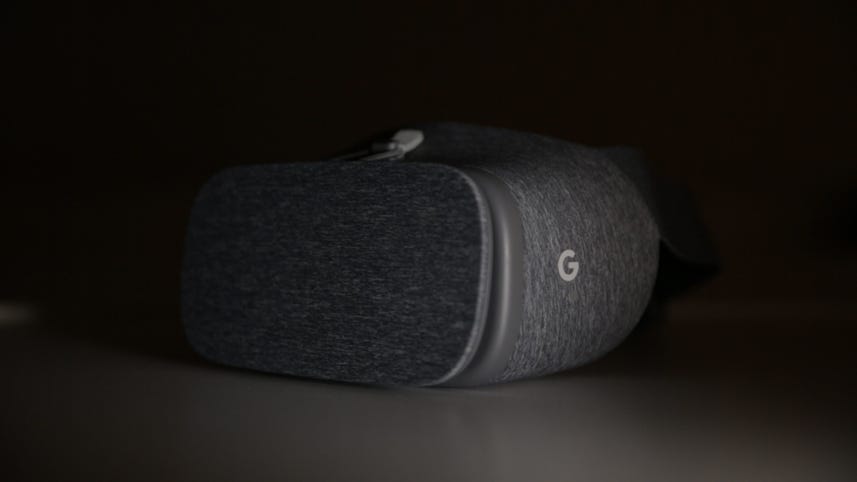 Above: 90-plus percent of my original Daydream View video review is still relevant today.

One year ago, when I reviewed the first Daydream View, the platform wasn't close to ready for average buyers. The headset wasn't comfortable enough, the straps didn't stay put, you had only a handful of apps to choose from, and Daydream phones largely didn't exist -- only Google's own Pixel and Pixel XL would work.

The new Daydream View is superior, but Google has further to go. Gear VR is probably the better pick if you've got a Samsung phone, with more apps and games I'd recommend, and both Gear VR and Daydream could get eclipsed by the $199 (£150 or AU$255 converted) Oculus Go early next year -- which doesn't require a phone.

If you're curious to try VR with your Pixel 2 XL, go for it.

But if you're considering the smaller Pixel 2, I'd leave it alone.

Read next: VR promised us the future. Too bad we're stuck in the present

And: VR could trick stroke victims' brains towards recovery