The size, price and specs all add up to the best phone for the most people.

Galaxy Note 10, or Note 10 Plus? For the first time ever, Samsung announced two sizes of the same Note phone, with only a few differences beyond their screen dimensions and price. Finally, we can answer the questions we've been chewing on since Samsung's reveal: do the differences matter, and which phone is the better buy?

The Galaxy Note 10 brings the best of Samsung's Note line in a compact body that sells for the right price.

It lacks a microSD card slot and a 3.5mm headphone jack.

Despite missing a few minor features, the Note 10's size, price and specs add up to the best all-around Samsung phone you can get right now.

While the 6.8-inch Note 10 Plus impresses in nearly every way, I'm happy to say that the cheaper, smaller 6.3-inch Note 10 is the best pick for most.

Its large screen gives you room to do what you want without being too cumbersome to hold (case in point: I dropped it a lot less than the Note 10 Plus), and the features it trades off -- no depth camera on the phone's back, no microSD card slot, less RAM, a smaller battery -- all even out when you consider the Note 10's relative portability and $150 price savings compared to the Plus.

As usual with Samsung variants, the two phones share the most important core features, from a crystal-clear AMOLED screen and appealing design to the Snapdragon 855 chipset and S Pen stylus. They both have the same main rear- and front-facing cameras, fast charging with an included 25-watt charger, water-resistance (IP68) and the ability to wirelessly charge another Qi-enabled device. They run Android 9 and will be upgradable to Android 10 -- no word on a timeline yet. (Scroll to the end for the full specs comparison.)

And how does the Note 10 match up to Samsung's other Galaxy phones, like the Galaxy S10 Plus, cheap-premium Galaxy S10E and "fast" handsets like the Note 10 Plus 5G and Galaxy A90 5G? If you're comfortable with a $1,000 budget  -- or with waiting for deals -- it simply delivers the best design and meaningful feature set for the price. That's so long as you can adjust to using wireless or USB-C headphones. Honestly, I just learned to carry the included headphones with me.

As for Samsung's loftier devices, we recommend holding off on 5G phones until the networks are more developed and the handset prices come down.

How the Note 10 and Note 10 Plus compare

Both Note 10 phones also have some issues with the edge-to-edge display sometimes registering mispresses that it should reject, which means you might launch or close an app by accidentally touching the screen. 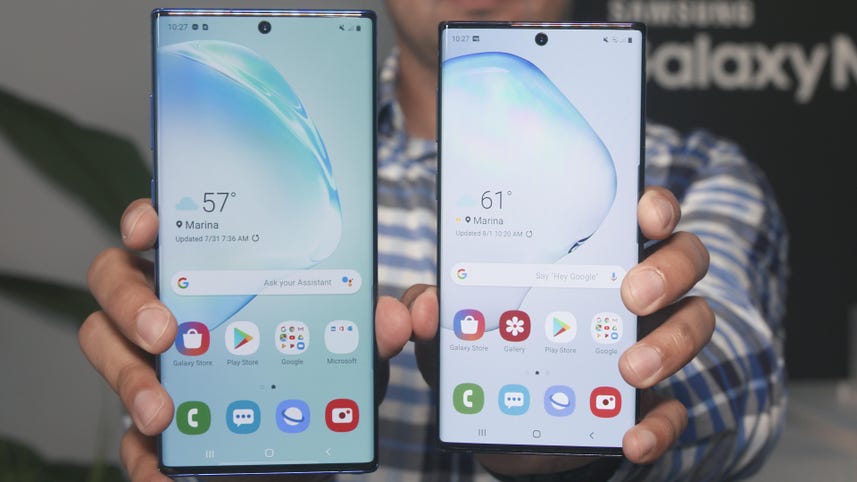 Galaxy Note 10 versus Note 10 Plus: We determine the better phone
4:17
Watch Now

For everything else, from the solid camera quality to the striking finish of the Note 10 in Aura Glow, read my full Galaxy Note 10 Plus review.