Using nothing more than 4 AA batteries and sound waves, the affordable Waytap brings the bar to you.

Andrew loves writing about cool, futuristic technology. He's reviewed everything from vacuum cleaners to beer brewing robots in pursuit of the perfect smart home. He wants the smart home to make him feel powerful, and it's getting there.

Six of us gathered around the Fizzics Waytap. We each held two glasses of Avery's White Rascal -- a Belgian-Style White Ale with notes of coriander and orange peel. One glass came straight from the bottle, the other glass was poured through Fizzics.

A simple, portable device powered by 4 AA batteries, the Fizzics Waytap makes bottled beer taste more like it came from the tap. It's slimmer, more attractive, and less expensive than the original Fizzics.

Like the original, the Waytap doesn't produce an exact replica of draft beer. It mutes bitter flavors and smoothes the texture of your beer -- which can hide its unique characteristics. Unlike the original Fizzics, the Waytap can't fit growlers.

A fun product if you like tinkering with beer and value an attractive pour, the Fizzics Waytap is reasonably priced and easy-to-use -- just don't expect perfect draft beer.

The $130 (£100, AU$175) Fizzics Waytap uses sound waves to shake up the bubbles of your beer. The goal -- make bottled beer taste more like it came from the tap at your favorite bar. It's the same tech as the original $170 (£135, AU$230) Fizzics we tested last year, but the Waytap sports a slimmed down, classier design.

We sipped from both glasses, and the results confirmed my suspicions -- for better and for worse, the Waytap works as well as the original Fizzics, smoothing out the flavor of your beer with the power of science. This process accents sweeter flavors, and mutes the bitter end of the taste spectrum. It makes the beer bubblier and adds a nice head to make it appear like it was poured from the tap, but it's not quite the same thing. Our group was split on the results -- three preferred the White Rascal straight from the bottle (including me), three liked the Fizzics version better.

The Waytap doesn't fix my issues with the original Fizzics, but it's still a good product, and now it looks better and costs less. So if you like experimenting with your beer and especially if you value sweeter flavors -- I'm happy to recommend the reasonably priced $130 Fizzics Waytap. If you're looking for an exact replica of beer on tap, or if you want to stick with the beer as the brewer intended, this isn't the product for you.

Fizzics Waytap brings the bubbles to your bottled beer

The science of Fizzics

Any skepticism around this product is of course justified. Using sound -- not carbon dioxide or any other gases or flavorings -- to improve the taste of bottled beer sounds like a complete load of crap. Check out my review of the original -- after my first Fizzics beer, I was pleasantly surprised to say the least. Fizzics isn't pseudo-science or a simple placebo effect, it really does make a difference.

As it turns out, the science of Fizzics -- the same as in the Waytap -- is fundamentally sound. Brewing laboratories use machines called sonicator baths create a similar effect. Those labs do it to flatten the beer for tests, but the beer's fizz rises dramatically when sonication first starts. I suspect the Waytap does something similar, just in much smaller doses.

Since it doesn't use any gas canisters or kegs, part of the appeal of the Waytap -- like the Fizzics -- is how simple it is to set up and use. You need four AA batteries, your bottle or can of beer, and a glass. That's it.

Pop off the Waytap's lid by pressing the button on the front, put your open can or bottle on the base, then replace the lid -- making sure the metal hose in the center runs into your beer. Grab your glass and pull the handle.

The Waytap gently pours your beer while agitating the carbonation with sound. Fizzics digitally controls the flow while it pours and keeps most of the carbonation intact by keeping the bottle under pressure. When your glass is just about full, push the handle away from you and the Waytap will up the sound intensity and add a frothy head to the top of your glass.

You can clean the Waytap just by running a glass of warm water through the system. The mat and base also separate so you can hand wash them. On average, it took me two to three minutes after I poured one beer before I was ready to pour the next -- and that's when I was using two different beers. If you're pouring multiple bottles of a single beer for guests, there's no need to clean between bottles.

You can buy the attractive, easy-to-use Fizzics Waytap for $130 from Brookstone, Amazon, and in certain Target and Best Buy stores. Right now, the Waytap is only available at US retailers, but Fizzics.com will ship it anywhere in the world.

Almost everything I described above is the same on both the Waytap and the original Fizzics. The only significant differences between the two are the price and the look. Again, the original Fizzics is $170. The Waytap is $130. The Waytap is slimmer and lighter (3 pounds/1.4kg vs 3.5 pounds/1.6kg). It's also much more attractive. It has the look of a sleek bar tool that would blend in with a number of decors.

I liked the design of the original Fizzics when I reviewed it last year, but the Waytap makes the original look bulky and industrial by comparison.

Fortunately, the Waytap isn't replacing the original Fizzics -- it's just adding to the company's lineup. Deciding between them is simple -- if you often bring home growlers, get the Fizzics. If not, go with the Waytap.

The company's obviously bragging, but as a beer snob, I take offense to the idea that changing the way a beer was meant to be carbonated helps unlock its "true taste." And Fizzics does change the texture of your beer -- smoothing out the carbonation. With the White Rascal mentioned above, some coworkers found that to be a good thing. Fizzics reduced the "bite" of the beer. I missed that sharpness in the Fizzics version, as did two of my other coworkers with a penchant for Belgian style beer.

We also tried a dark beer -- Left Hand's Milk Stout -- and a hoppy beer -- Flying Dog's The Truth Imperial IPA -- with the Fizzics Waytap. I preferred the original bottled version with these beers too, but I was in the minority on both. With the IPA in particular, I didn't like how the Waytap blunted the bitterness of the hops, but my coworkers found the original too hoppy and liked the Fizzics effect.

With Left Hand's Milk Stout, Fizzics accents the sweeter flavors already in the beer to great effect. I still slightly preferred the balance of the original, but I'd be happy if a bartender poured me either glass.

For the review of the original Fizzics, we tried a macrobrew -- Bud Light -- and took Fizzics to a bar for a side-by-side taste test with beer from the tap. Fizzics did give the Bud Light a boost, but couldn't live up to the taste of an actual draft beer.

Watch this: Can Fizzics unlock your bottled beer's true potential?
03:57 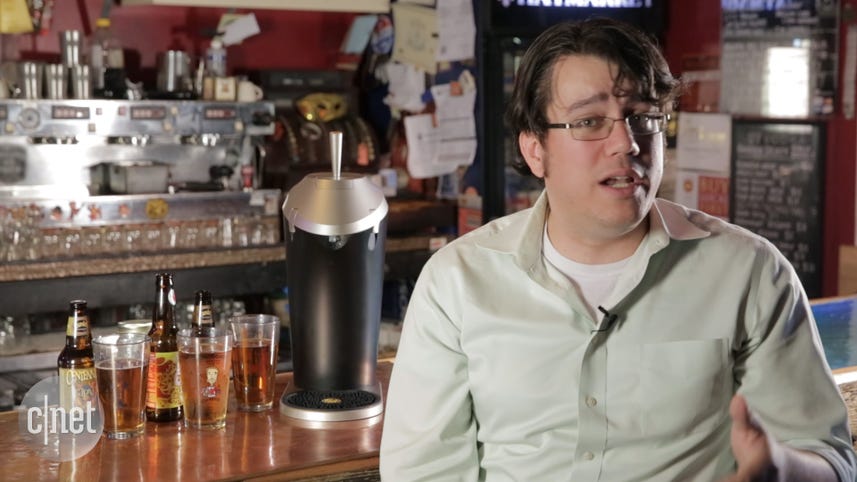 The original Fizzics surprised me quite a bit. I really wasn't expecting it to do anything, but it genuinely transforms your beer into something livelier and smoother using sound waves. The second version of the Fizzics -- the Fizzics Waytap -- is cheaper, slimmer and more attractive. For $130, it's well worth a buy if you want to change up your beer routine and impress your friends with pours that look like they came from the tap. It's perfect for beer lovers who like to tinker.

It's less perfect for beer snobs like myself. Like the Fizzics before it, the Waytap doesn't perfectly replicate a draft beer, and it changes the texture of the beer and the balance of flavors in its attempt at imitation. It never ruined a beer in my opinion, but it does take something away from hoppy beers in particular. I wish Fizzics had addressed this issue with the Waytap, but a cheaper, more attractive, and equally capable product as the original is still something worth drinking to.