Thanks to its thoughtful design innovations, the Asus ROG Phone almost feels like a portable console.

Patrick Holland has an eye for photography and a passion for everything mobile. He is a colorful raconteur who will guide you through the ever-changing and fast-paced world of phones. He also is one of the hosts of CNET's I'm So Obsessed podcast.

Update, May 13: We compared the Asus ROG phone to the Razer Phone 2, Nubia Red Magic Mars and Black Shark to see which is the best gaming phone. The in-depth testing covered everything from game play and processing power to cooling systems and screens. Read: Best phone for gaming in 2019: Razer 2 vs. Asus ROG, Nubia Red Magic Mars, Xiaomi Black Shark.

The Asus ROG Phone has innovative AirTriggers to expand game control beyond the screen, excellent battery life and a ton of optional gaming accessories.

It costs $100 more than the Razer Phone 2 and the design might be too out there for some. The screen was too dim in some situations and the detachable fan unit is just asking to be lost.

Let there be no doubt: this is a serious gaming phone. Nongamers should look at the Pixel 3, OnePlus 6 or Galaxy Note 9 instead.

If you can't tell from the angular lines, exposed copper heat sinks and pulsating light-up logo, the Asus ROG Phone is designed for gaming. While I can't say the looks are my cup of tea, there will be plenty of people who think this styling looks badass. And it's nice to see a phone maker go for something different.

But what exactly makes this a gaming phone? Well let's start with the AMOLED display that can refresh 90 times a second -- a first for any OLED phone. The higher refresh rate means less motion blur and faster response times. It's not as high as the Razer Phone 2's 120Hz LCD screen, but the fast refresh times are a noticeable improvement over other phones when playing certain games. And even though the ROG's screen looks nice, sometimes it was too dim even at its brightest setting.

Watch this: Asus ROG Phone is the best phone for playing PUBG
02:56 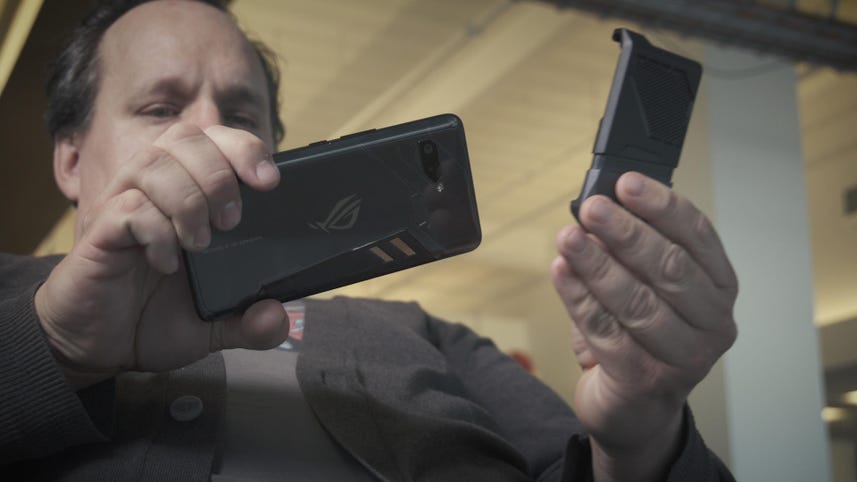 Perhaps one of the coolest and most innovative features on the ROG Phone is AirTriggers. These are pressure sensitive corners that double as bumper buttons for games. I've used phones with pressure sensitive features before like the Pixel 3 where you can squeeze the sides to open Google Assistant. But Asus' approach here is by far my favorite implementation of the technology on phones.

AirTriggers can be programmed for specific functions. For example in PUBG, I assigned one to fire a weapon and another to crouch. It's a curious solution to the lack of physical controls on phones and yet it's so well-implemented and feels so intuitive that I became much more immersed in the games I played.

The curved bezels and sides make the phone incredibly comfortable to hold especially in landscape. The speakers, dotted with copper colored grills, are wonderfully loud and sound fantastic. They're right up there with the amazing speakers on the Razer Phone 2 in terms of being able to produce bombastic high-quality sound.

The ROG has two USB-C ports, one on the bottom and one on the side so when you're playing games in landscape mode the power cord doesn't get in the way of your hands. The side port also supports accessories like a detachable fan called the AeroActive cooler which comes with the phone.

Now, it might seem silly to attach a fan to the back of your phone, but it makes a big difference in terms of performance, especially if you're going to be playing a game for 20 to 30 minutes without a break. The fan keeps the phone from getting too hot to hold and along with a software setting called "X mode" lets the processor run at its highest speed for longer during gameplay.

Quick break for a Patrick thought: I'm neutral on the detachable fan. I have a strong fear I'd lose it, but the gain in performance is beyond impressive especially when I played a game for a long amount of time. But then, I am attaching a fan to my phone which seems like a clunky solution.

But don't get me wrong, you don't need the fan and X mode to use this phone in everyday tasks. The phone opens apps lighting fast, even big ones like the camera. Android animations are peppy and appear smooth. There's no lag when processing and saving photos. 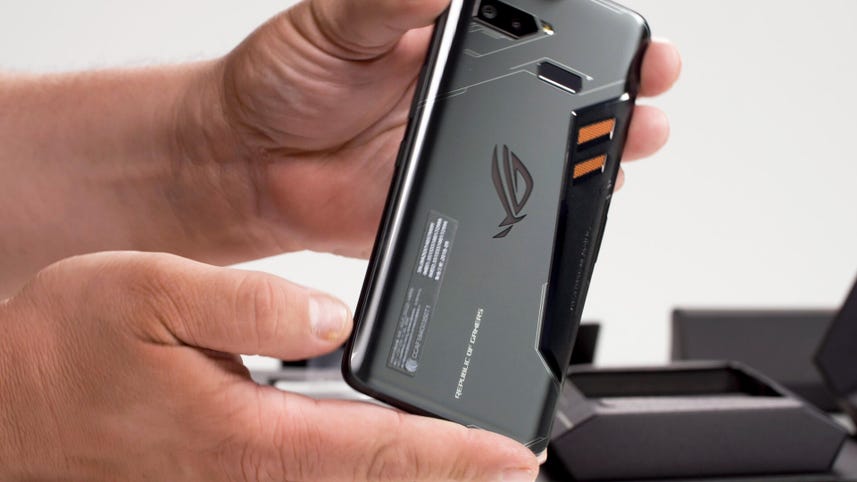 I ran GeekBench 4 when I first got the ROG without the fan and X mode enabled and got a single-core score of 1,413 and a multi-core score of 5,592. Then I ran it again with the fan attached and X mode turned on and got 2,556 for single-core and 8,445 for multi-core. That ranks it up there with the Razer Phone 2, Galaxy Note 9 and OnePlus 6 as one of the fastest current Android phones.

However, Apple's iPhone XS is in another league in terms of raw processing power and performance -- and it doesn't require a detachable fan. Check out the results of our performance tests below.

Then there's all the regular phone stuff. It has a 4,000-mAh battery that lasted an incredible 15 hours and 5 minutes battery life in CNET's battery lab test for continuous video playback on airplane mode.

Image quality from the dual rear cameras is good. They capture a nice amount of detail. HDR mode adds a bit more dynamic range without going over the top with highlights and shadows. Take a look at the photos below I took inside a cafe: one with HDR enabled and the other with it off. Notice how the HDR captures the details outside the door and windows whereas the non-HDR photo just shows a white blob of clipped highlights.

The second rear camera gives you a wider field of view so you can pack more into your frame. And it is really wide. I found it great for moments I wanted to take a panorama but didn't want to go through that capture process. I also liked putting the camera on the wide-angle setting and placing the phone super close to an object in the foreground to create a perspective effect.

Video looks decent but definitely suffers in low-light situations. The ROG has slow motion in 1080p resolution at 240 frames per second. It's not as impressive as the iPhone XS, but it is definitely worth trying.

Below are some more photos I took with the Asus ROG Phone.

There's also a cool feature called ZenMotion. When the screen is asleep you can draw a letter on it to launch an app. Draw a "W" to unlock the phone and open the weather app or a "C" to open the camera. Besides showing this feature off to my friends, I didn't find myself using it but once or twice.

For those of you inclined, there is an app called ZenMoji that maps an AR cartoon avatar of an animal like a horse, cat or bear over your face. The characters are pretty adorable and yet another entry in the animated emoji wars: Apple has Memoji, Samsung has AR Emoji, LG has animated emoji and Huawei has 3D Live Emoji. You'll never be at a loss of ways to express yourself.

Asus designed a lot of gaming accessories for the ROG that really take it beyond just playing games on a mobile phone. Accessories include:

TwinView Dock: It transforms the phone into a Nintendo DS-like dual screen device and adds two physical shoulder buttons, a 6,000mAh battery and a selfie camera to stream and record yourself as you play.

Gamevice controller: The ROG fits in the middle of the vice like device which has dual joysticks, fire triggers, bumpers, a D-pad and all the buttons you'd expect.

WiGig Display Dock: Stream content wirelessly from your ROG Phone to a TV with minimal latency.

Professional Dock - It has less ports than the Mobile Desktop Dock but has HDMI for a monitor and two USB ports for a keyboard and mouse.

All of these are sold separately and there's currently no word on pricing or availability.

I didn't expect to like the ROG as much as I did. The extras really do make a difference in how this thing performs: the AirTriggers, X mode and the fan actually work to enhance the gaming experience. But the ROG also has a solid camera and a great battery life.

While I wouldn't recommend this to nongamers (the Pixel 3, OnePlus 6 and Galaxy Note 9 are better all-around choices), if you're a gamer trying to decide between this and the Razer Phone 2, Asus has the edge when it comes to controls and optional accessories. Of course that edge comes at a higher price.

Personally I find the design of the Razer Phone 2 much more appealing as a phone and high-end mobile gaming device. And even without a fan, it beat the ROG in nearly every performance test I ran.

Yet as I write this, Apple is preparing to ship the iPhone XR which costs less than either the Razer or the ROG, has bonkers processing power -- although we've yet to test it -- and access to a larger library of games on iOS. It doesn't have a high-refresh rate display or pressure sensitive buttons, but it's definitely a worthy consideration for a gaming phone.