2018 BMW 4 Series Convertible review: Sport and luxury with a top that drops

The 4 Series Convertible is a bit softer around the edges than the Coupe, but it's still a satisfyingly sharp driver's car.

Meet the 2018 BMW 4 Series Convertible. It starts with everything great about the 4 Series Coupe — the sporty performance, the premium amenities, the windswept good looks that, by the way, have just received a facelift for the 2018 model year — but then it adds a retractable hardtop. However, adding that convertible top comes with a few trade offs, including increased weight and price and reduced trunk space.

The motorized top on the 4 Series Convertible drops at the touch of a button and offers coupe-like isolation with the top up. Despite being much heavier than the coupe, the drop top still handles and performs well.

The roof mechanism takes up a lot of the 4 Series' trunk space. iDrive can be a bit menu heavy and BMW charges extra for Apple CarPlay. It doesn't support Android Auto.

The 2018 BMW 4 Series Convertible is slightly slower and more expensive than the coupe, but it's still an engaging drivers' car for more relaxed, open-air driving.

But if you're a convertible sort of person, these are trade offs are all par for the course and a price worth paying for unlimited headroom at the touch of a button. I hit the road in a 2018 BMW 430i Convertible to see how it stacks up, both to the coupe version and the cabriolet competition.

Our example was a 430i powered by a 2.0-liter turbocharged four-cylinder engine that makes 248 horsepower and 258 pound-feet of torque. That's a decent amount of power for hustling around in the back roads and a healthy bit of torque with good low-range delivery and responsiveness for commuting around in traffic.

That power makes its way to the rear wheels via an eight-speed automatic transmission, the only gearbox available to convertible drivers. It's a pretty good automatic around town with your choice of a sport program or paddle shifters to liven things up for more dynamic driving. The Coupe is a better performer than the cabriolet. For starters, the coupe is available with a six-speed manual gearbox -- a tempting option for those who prefer a more engaged driving experience.

The convertible is also about 460 pounds heavier than its fixed-roof sibling thanks to the mechanical bits required for the power-folding top and the additional chassis stiffening required to compensate for the lack of a structural roof. The extra weight can be felt in the corners and off the line. The convertible sprints to 60 mph in 6 seconds, about a half second short of the 430i Coupe. Stepping up to the more powerful inline six-cylinder engine in the 440i somewhat makes up for the heavier body; 320 horsepower, 330 pound-feet of torque get you to 60 mph in 5.1 seconds.

The placement of that weight skews the coupe's 50/50 weight distribution to a rear biased 47/53 and somewhat raised the car's center of mass. Additional body movement (roll) when cornering and slight dulling of the 4 Series' responsiveness is the price paid.

That said, this is still a BMW 4 Series and, despite all of its compromises relative to the coupe, it's still a great performing vehicle. The ride is controlled over bumps, initial turn-in on the steering is crisp and the handling is nicely neutral, which makes it very easy and rewarding to drive. Even the slightly slower zero-to-60 time is still pretty impressive.

In daily driving, I didn't really notice the extra mass, but I did notice one weird thing. At highway speeds with the top down, the convertible felt lighter on its toes and less planted than at the same speeds top-up. I suspect a bit of high-speed aerodynamic lift at play here, but can't confirm that with anything more than seat-of-the-pants feel.

BMW says the three-panel roof stows or deploys in about 20 seconds with the touch of a button, but I timed it at around 27 seconds. I'm not sure if BMW's time includes raising or lowering the side glass, but mine did. Either way, that's relatively quick considering the amount of mechanical gymnastics required to fit the roof into the trunk and especially considering that you can operate the roof while the 4 Series is moving at speeds up to 11 mph.

The top folds into the trunk, so you lose quite a bit of the already compromised 13.1 cubic feet of cargo space. Top down, you're looking at around 8 cubic feet, enough for a pair of 28-inch suitcases or four carry-on sized bags. (The coupe, for comparison, boasts around 15.7 cubic feet.) A rocker switch inside the trunk can lift the folded panels out of the way, creating a larger opening for loading larger items. So you can get those carry-ons out without having to totally raise the roof.

Even with the top up, there are small trunk-related annoyances. A divider marks the area where items can be placed and not interfere with the operation of the top. It can be lifted out of the way to make room for bulky items, but the top won't work while it's out of position. When I inevitably forgot to put it back, I'd have to stop, pop the trunk, get out and lock it in place before I could put the top down. It is the most first-world of problems, but still very annoying.

For the trouble, the hard top comes with a number of advantages over a lighter, more compact fabric roof. For starters, there's better top-up isolation from the environment. When it's raining or cold, the cabin stays nice and toasty. At highway speeds, the cabin is about as quiet as the coupe with the same low levels of wind noise. A hard top is more secure, easier to wash and, depending on who you ask, looks better than a rag top.

With the top down, the 4 Series' front windscreen does a good job of defecting air over the passenger compartment and I was able to enjoy music at reasonably volumes and conversations without shouting too much. There's also a fabric wind deflector hidden behind the rear seats that can be installed behind the front seats. This setup almost completely blocks off the rear seating area and significantly reduces the amount of buffeting at speed, but it is awkward to install and stow and looks kind of goofy, so I only used it once.

Specific to the convertible are BMW's neck warmers, vents in the seat back, just below the headrest, that blows warm air over the front passengers' shoulders and necks. This feature is similar to Mercedes-Benz's AirScarf. Here, the vents don't appear to be adjustable and don't move with the headrests when raised, so the placement may be a bit of an issue for taller drivers. However, when combined with the heated seating surfaces and steering wheel, the neck warmers allow for open-air driving even on chilly mornings.

The 4 Series Convertible is really a four-season car. You can put the top down for Spring and Summer and even the Fall thanks to seat and neck warmers. For the Winter or rainy seasons, you can put the top up and keep driving with almost no comfort compromises relative to the coupe aside from a slightly smaller trunk.

We've already seen this sixth-generation of BMW's iDrive system and gone into great detail evaluating it in other recent Bimmer models. Unlike the larger 5 and 7 Series models, the 4 Series is working with a slightly smaller 8.8-inch display for our model with the navigation upgrade (or a yet smaller 6.5-inch screen on base models). That's still a fairly large screen with a very wide aspect ratio. It's not touch sensitive, but can be commanded with voice or the iDrive controller on the center console. 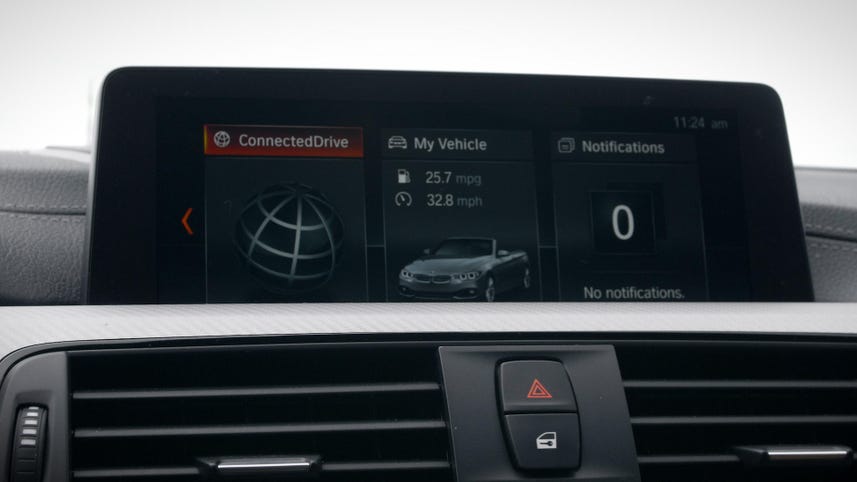 That controller features a knob that can be twisted, nudged and pressed, a bank of shortcut buttons and a touch sensitive area that can be swiped, pinched and "written" on with a fingertip for inputting search terms or addresses. This controller is well placed and very easy to use thanks to multiple generations of revision. You've come a long way, iDrive.

The onscreen interface has also come a long way. The home screen, for example, has been highly simplified to a simple scrolling six-panel layout that puts all of the most important information at top level. Any of these panels (or the shortcut buttons on the controller) can be used to quickly jump to any part of the infotainment interface with almost no lag. Everything is fairly well organized and the learning curve is an easy one. The system can feel a bit menu heavy, however, once you get beyond the home screen and the most commonly accessed features.

Apple CarPlay can be added, even without the navigation system. Though, the nature of how you'll pay for that functionality is the source of recent controversy. Consider that most of Bimmer's competitors and many budget cars are making it standard and BMW's decision-making around Apple CarPlay has become a bit of a double-edged sword.

Android users don't have to worry about any of that because BMW has no support for Android Auto and no plans to do so in the future. As a Google Pixel XL user, I was stuck using Bluetooth to stream my podcasts and audiobooks. Even then, I found BMW's Bluetooth system to be inconsistent and prone to random disconnection.

There's also the automaker's own BMW Connected app that allows for tethering to a smartphone for things like sending previously searched destinations to the navigation system, streaming and controlling supported apps like Spotify and remotely monitoring the vehicle over BMW's telematics subscription service.

All of the extra complexity of the convertible top cost a fair bit more to design, engineer and manufacture, so it's no surprise that the 4 Series Convertible's bottom is also a bit heavier than the coupe.

With a clean slate, I'd start with the 440i Sport Line ($60,000) with the more potent engine given the heavier curb weight. I'd add the Executive Tier ($3,400) for heated seats, adaptive LED headlamps, top-view parking cameras and blind-spot monitoring. Of course, I'd check the boxes for the gorgeous Snapper Rocks Blue Metallic paint ($550), neck warmer ($500) and Driving Assistance Package ($500) with collision warning, pedestrian detection, automatic emergency braking and lane departure warning. That would bring me to a recommended pricing of $65,140 before the $995 destination charge.

The Mercedes-Benz C-Class Cabriolet and the Audi A5 Cabriolet strike me as the closest competitor to the 4 Series Convertible, but that should come as no surprise. They're the only other players in this class making drop tops since Infiniti dropped out.

The Benz uses a fabric top, saving about 100 pounds over the Bimmer, has more torque and a more luxurious cabin. However flawed, BMW's iDrive system is significantly better than the older-generation Mercedes COMAND. Pricing is about the same and performance is on par for these two. They're fairly evenly matched, all things said.

The Audi is surprising, coming standard with all-wheel drive and weighing almost 200 pounds less than the 430i xDrive with a bit more torque. It also uses a fabric top that works at speeds up to 31 mph and boasts best-in-class tech with standard Android Auto and Apple CarPlay. It also starts at about $2,000 less than the rear-drive 430i or $4,000 less than the xDrive model, a more accurate comparison. It looks a bit duller than the 4 Series or the C-Class, but I think I'd give the edge to Audi in this very small class.