Google Glass competitors are on their way, and we've seen them at CES 2013.

LAS VEGAS--Cyborgs, meet your gear. The Vuzix M100 Smart Glasses, a wearable Bluetooth/Wi-Fi headpiece with a built-in HD camera and WQVGA floating eyepiece display, are on hand to try out at CES 2013. Previously seen in nonworking prototype form at the end of last year, the M100 Smart Glasses will run on Android and eventually iOS and be available by summer 2013 (fall for iOS, pending app approval).

"It would feel like you're looking at a screen the size of your phone, but the image floats out in space," Vuzix President and Chief Executive Paul Travers said to CNET's Bridget Carey back in November. "It's a virtual image beamed to your eye." As Vuzix explained back then, the M100 Smart Glasses would feature 720p HD video recording onto 8GB of flash storage, built-in GPS and a compass, and an accelerometer. The floating screen situated in the eyepiece has a WQVGA (428x240-pixel) display. As Bridget Carey wrote back in November, "The projected image is described to be similar to holding a smartphone screen 14 inches away from one's eye."

I tried it myself at CES Unveiled in Las Vegas, and watched videos -- a clip of the Pixar movie "The Incredibles," and some demo footage of videos and phone interfaces. Vuzix will be opening up app development via an SDK. The Smart Glasses will run on Android 4.0, but these apps will have to await approval on iOS. 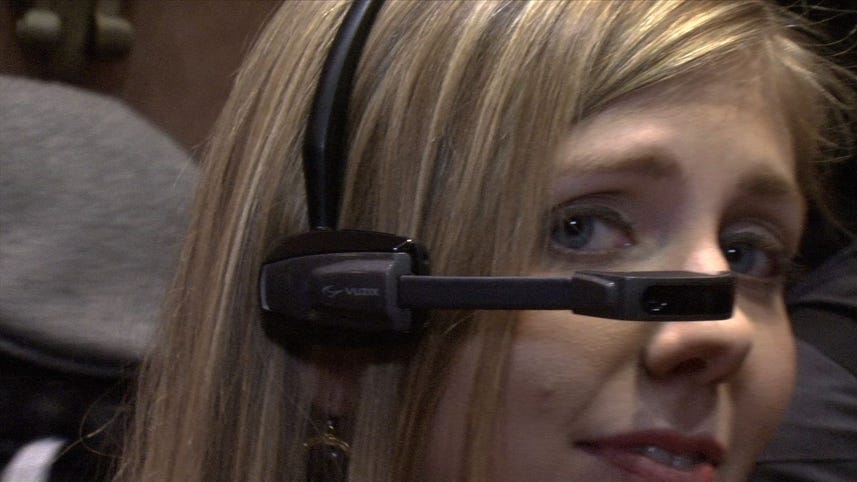 What will these Google Glass competitors be used for? Voice search, perhaps, or for hands-free video recording and unidirectional video chat (you can only show what's in front of you, not your own face). Or, perhaps, true augmented-reality navigation apps. The floating-screen effect worked surprisingly well, but I'd think that using these in any mission-critical space (or, a space where moving vehicles could collide with you) would be a dangerous endeavor.

The M100 Smart Glasses employ technology that will be seen in other Vuzix products, including see-through augmented-reality binoculars. The M100s aren't cheap; they're expected to cost "under $500" if they are on schedule to debut later this year. They're certainly intriguing, though, and the projected video effect works exactly as advertised.