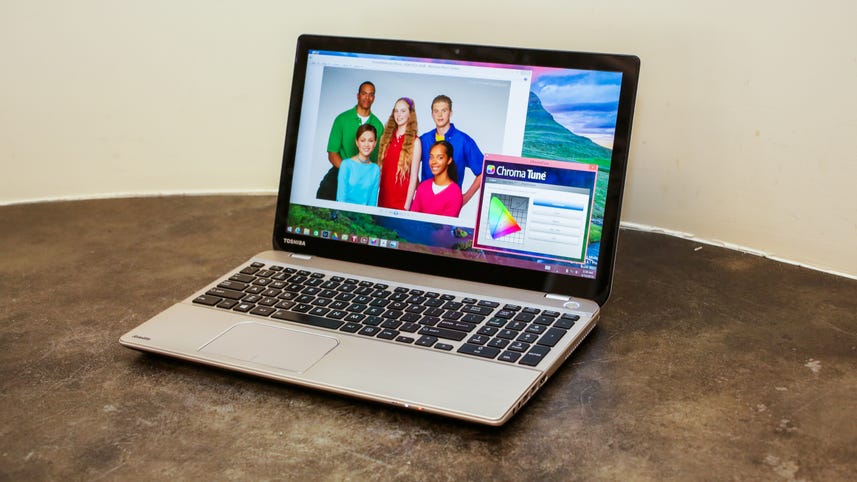 Toshiba hits 4K in the Satellite P55T laptop
1:17
Watch Now
Other PC-makers have announced laptops with 4K screens, most notably Lenovo and the IdeaPad Y50 from CES 2014, but Toshiba may be the first to actually hit stores with the new Satellite P55T. This 15.6-inch clamshell features a 3,840x2,160 native resolution, the same found on the current generation of big screen 4K televisions.

That trumps even the highest better-than-HD screens we've seen in laptops over the past year. Those models, from the Retina MacBook Pro to the Lenovo Yoga 2 Pro to Toshiba's own Kirabook , have resolutions that range from 2,560x1,440 to 3,200x1,800.

In our brief hands-on time with the new P55T, the screen looked amazing, especially when playing back 4K video content. Toshiba says the panel is certified by Technicolor, the digital product and services company, and a Technicolor app included with the system allows you to switch between warm, cool, Technicolor, and other screen color profiles.

With an Intel Core i7 CPU and discrete AMD graphics, you should be able to edit and play a 4K video stream without a problem; although running really high-end video, such as multiple 4K streams simultaneously, may need some very specialized hardware, like the new Mac Pro desktop.

The laptop body itself was perfectly fine, but failed to stand out, with a generic-looking silver-grey aluminum body and black island-style keyboard. Some design touches feel ported over from the premium Kirabook line, such as the rounded corners of the chassis, and the similar rounded top corners on the large clickpad-style touch pad.

Toshiba Back To School Laptops 2014

+1 more
See all photos
If the Satellite P55T cost a lot, we'd say the design felt especially pedestrian, but it's hard to knock, considering that even with the high-end components and full 4K screen, this system runs a very reasonable $1,499, putting it within reach for serious amateur photo and video enthusiasts.

The Satellite P55T should be available by the end of April 2014. Also new from Toshiba, but coming later on June 22, is a full refresh of the company's consumer laptop lines. Aimed at back-to-school audiences, you'll soon see new versions of the Satellite C series, L series, E series, and S series.