Robotic ball toy Sphero and "Star Wars: The Force Awakens" astromech droid BB-8 are a match made in the Netherworld of the Force.

When the " Star Wars: The Force Awakens" trailer dropped last November, one little astromech droid was the talk of the town: BB-8, the adorable spherical robot spotted zipping along the desert landscape.

The robot itself was designed and puppeteered by LucasFilm, but an actual working life-size model for public appearances was created by Colorado-based toy robot company Sphero. It was a perfect fit. Sphero's eponymous robot launched in 2011, a sphere that could be remote-controlled via a smartphone app.

Now that rolling toy has been adapted into a pint-sized BB-8, with an accompanying app that allows you to drive it around and send it on tiny adventures, coming in at a suggested retail price of $150, AU$250 or £130. But can it replace R2-D2 in our hearts?

The Sphero BB-8 is a plastic toy, and it looks like a plastic toy. It's not, like the droid in the film, artfully scuffed and weathered (although if you play with it enough, you might be able to achieve that effect for yourself).

While there really isn't any getting around the plastic construction, there is a pleasant heft when you pick it up, thanks to the electronics inside. Wheels, weights and a gyroscope keep the internals positioned and oriented in the same direction as you drive BB-8 around, and they're also what keep BB-8's head in place.

Rolling around with Sphero BB-8 (pictures)

In practise, it doesn't quite work that way. At higher speeds, BB-8's head would slip down to one side, righting itself when the robot slowed or halted. The fact that it did always right itself, though, was impressive, and the head never actually departed from the body, no matter how many times I accidentally bumped into table legs.

Watch this: First Unboxing of the BB-8 toy from Star Wars: The Force Awakens
01:52 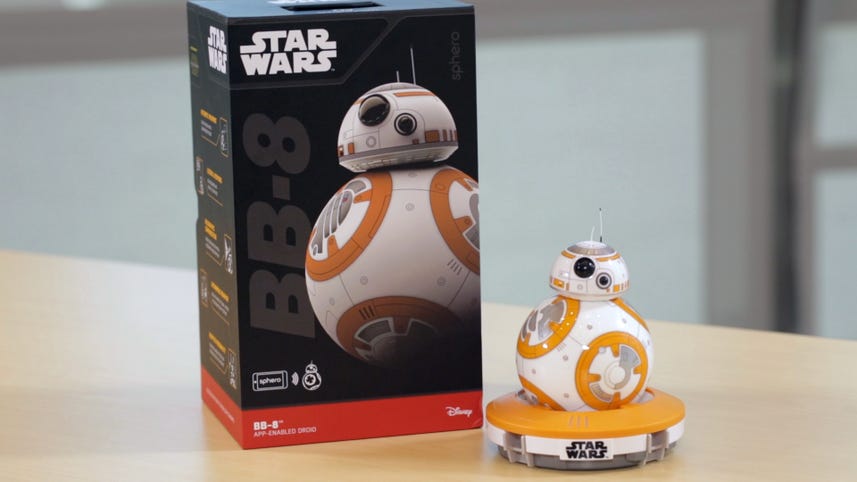 The accompanying app, available on iOS and Android, has three functions. You can free control BB-8 with a digital joystick. This works exactly like the digital joystick in other Sphero apps. A control pad on the right-hand side of your device allows you to point the robot's front in the direction you want it to go, while the left pad allows you to move and steer. Because the software has had four years of user feedback to develop, it's very responsive and easy to use, my personal lack of dual-stick coordination notwithstanding. You can liven up the experience with ramps and other makeshift obstacles, too.

It's a lot of fun, especially because this mode comes equipped with some of BB-8's emotes, so you can make it seem scared or happy or curious, or even emote yes and no, moving its head accordingly.

The app also has built-in voice control, and you can train BB-8 to respond to your voice commands. This was a little unresponsive on the test unit, which may have had something to do with my Australian accent and the fact that the robot was brand new out of the box.

The second function is the ability to send BB-8 exploring. This allows the robot to autonomously roam, occasionally sending up little bleeps of glee or fear as it rolls around. I found it rather adorable, and it served to generate more personality and sympathy than I expected from a robotic ball.

The final feature is really cool, although also really limited. You can record a short video message on your device through the mobile app. Then, when the device is positioned with BB-8 in view of the camera, it uses augmented reality to play the message on your phone's screen beaming out from BB-8's head, like R2-D2's holographic message in "A New Hope".

While this sounds like a great opportunity to send cool messages to friends, that's not possible. The limitation is that you can only view the message on the device on which it was recorded.

Unlike previous Sphero apps, there are no games or challenges. Sphero representative Jim Booth told me that LucasFilm was keeping a lot of content under wraps until the film's release, so there was a limit to how much the team could build into the app that would be consistent with the film experience. To that end, none of the older Sphero apps are compatible with BB-8 at this time.

Booth also added that, after the film is released in cinemas in December and they know more about BB-8, the team will be able to add more content, such as games and a wider range of emotes. In the future, the other apps may also be compatible with BB-8, although that will depend on approval from Disney and LucasFilm.

While it does have its limitations, the Sphero BB-8 shows a lot of promise, and it's a pretty cool little piece of interactive film merchandise, tapping into an existing team and ecosystem. It'll make a good Christmas gift for "Star Wars" fans, or even an opportunity to treat yourself -- especially if Sphero opens up compatibility with its SPRK educational programming apps.