Sony's newest Z-series flagship phone didn't take long to arrive -- the Xperia Z2 was only announced earlier this year -- but in a flash it took its place as Sony's ultimate smartphone. It brings a new, refined design and is one of the first smartphones along with the smaller Z3 Compact and the Z3 Tablet Compact , to promise a deep integration with Sony's PlayStation 4 games console.

The Sony Xperia Z3 packs great battery life, a brilliant display, beautiful design and waterproof features. If you own a PS4, you'll also be able to play PS4 games remotely on your phone.

The UI can use updating -- all the icons just look way too big. While it may have a 20.7-megapixel camera, autofocus can be a little off, but nothing a quick tap on the screen can't fix.

The Sony Xperia Z3 is Sony's most formidable to date with a formidable display and promising features that easily give Android competition from HTC, LG and Samsung a run for their money.

(Editors' note: Sony has also announced the Xperia Z3v , another phone with similar specs that's exclusive to Verizon in the US.)

With the Z3, Sony finally integrates its various platforms into an ecosystem that can rival Apple or Microsoft -- but on top of Google's Android. Indeed, the company's purchase of the mobile division from its joint partnership with Ericsson has finally take fruit, after two and a half years.

The Xperia Z3 is on sale now in the UK and set to hit stores Asia in early October. In the UK, it's available SIM-free from around £500 online, or free on monthly contracts from around the £35 mark. There's no word yet on how much the Z3 will sell for unlocked in the US but its Singapore price, S$998, converts to around $800.

In Australia, the Z3 is out now at AU$849, but there's no actual onsale date yet. You can get a more detailed look at pricing and carrier plans here.

In the US it's slated for a fall launch with T-Mobile, making it the first time Sony is actually selling its flagship handset at roughly the same time right around the world.

Sony Xperia Z3 is a glass and metal powerhouse (pictures)

Sometimes there's really no need to deviate too much from a good thing, That's just what Sony has done here, only slightly refining the previous Xperia formula to good effect. It keeps the glass-covered front and rear and the aluminum band that holds it all together, but like Apple, Sony refined the Z3's profile for a new generation. The a result is slightly smaller, slimmer and lighter Z2. The rounded edges also make for a better grip -- the sharper edges of the Z2 can dig uncomfortably into your hand.

Like the recent iPhone 6 and HTC One M8 , the Z3 has a premium feel that's hard to beat. The rear glass back can be prone to fingerprint smudges -- particularly the black model, but the white version hides this well.

Like most Sony devices, the Z3 is waterproof and has an IP58 rating. This means that the phone can survive up to 1.5 meters underwater for 30 minutes (note, however, that you shouldn't use it in salt water). As with all phones underwater, the touchscreen doesn't work, but there's a dedicated camera shutter button for aquatic pics. It'll certainly survive a dunk and you can listen to music while in the shower too.

Unlike the HTC Butterfly 2 , however, Sony's Z3 has flaps that you'll have to deal with when charging -- HTC's phone does away with the flaps, but cleverly remains waterproof. Like on the Z3 Compact, you'll have to make sure the flaps are tight shut before taking it for a dip. And speaking of HTC, Sony seems to have borrowed the idea of front-facing speakers. This makes it much easier to watch videos since you don't have to awkwardly cup your hands to redirect the sound.

The screen is really the best thing about the Z3, like the Z2 -- the IPS panel is bright and colors are definitely vivid. However, the one thing that irks me is Sony's failure to capitalize on the screen size and resolution -- you're limited to just five rows of four huge icons. I do wish Sony could have tweaked the UI a little to make everything look sleeker, given how thin the phone is.

Home-screen animations were pretty fluid, and while normally I found such features to be gimmicky resource hogs, the wave effects -- similar to the ones seen on the PlayStation -- do reinforce the impression that this is a Sony device.

Like the Z2, the Z3 comes running Android KitKat, but 4.4.4 instead of 4.4.2. The difference between the two versions are just some bug fixes, so software-wise, the features found on the Z3 are pretty much the same.

You have built-in themes, floating apps, Sony's own take on the image gallery called Albums, a music app called Walkman and a Movie app that lets you rent films (although this doesn't work from where I'm testing in Singapore).

There is new stuff, however, and this includes Lifelog, a health tracker; Sony Select, an app curator; and PlayStation, which lets you play PlayStation 4 games on your phone anywhere at home. You'll essentially be able to use your Xperia Z3 as a remote screen for your PS4, using the PS4's DualShock 4 controller to stay in the game.

Of the new features, the new PS4 remote play stands out as one of the more important features. Sony has been talking about integration for years now, having acquired the other half of its mobile business from the partnership with Ericsson in early 2012, and the Z3 looks set to properly realise this. If you already own a PS4, there's more reason to get locked in to the Sony ecosystem to get the full experience.

The Z3 is the first smartphone that lets you stream PlayStation 4 games to it: a very intriguing incentive, if you already have the console and are desperate to play while other people take their turn on the family TV.

Update, October 10: This feature has only just been rolled out, so our testing is currently ongoing. However, the video below should give you some idea of how it works on the Z3v. Check back soon and we'll update this section with our impressions on how it all works.

Watch this: Trying out PS4 remote play on the Sony Xperia Z3v
01:12 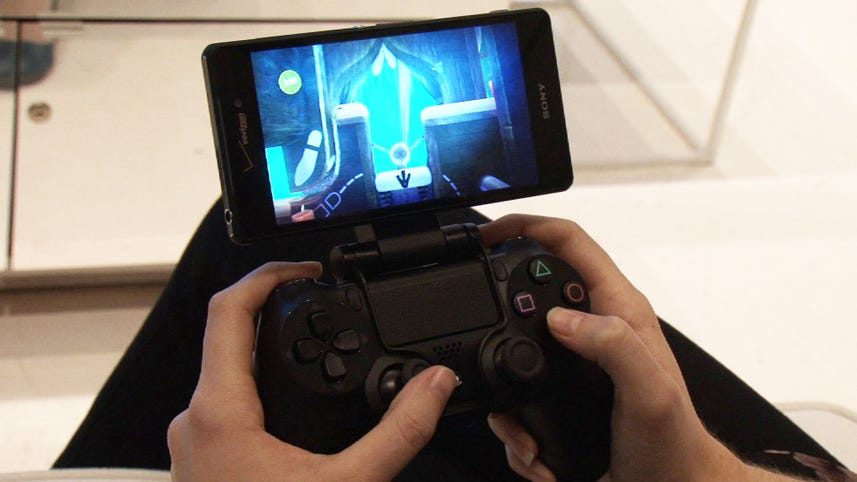 Spec-wise, the Z3 packs a snappy Snapdragon 801 quad-core processor clocked at 2.5GHz, and like the Z2 has a 5.2-inch full HD display (1,920x1,080 pixels). Unlike other manufacturers, including Samsung, who have chosen to go with a "Quad HD" display (2,560x1,440 pixels), Sony is sticking with full HD on the Z3 and has come out fighting on this point, saying that the higher resolution isn't worth the tradeoff in reduced battery life. This does make some sense, especially since Sony has claimed two days of battery life for the Z3, but more on this later.

Other specs include 3GB RAM and either 16GB or 32GB of onboard storage. You'll also have dual band Wi-Fi, Bluetooth 4.0 and NFC connectivity.

Are you curious about how the Xperia Z3 holds up against the current crop of Android flagships from the major brands? Here's our handy chart:

The Sony Xperia Z3 comes with the same 20.7-megapixel camera found on the Z1 and Z2, and like the Z2, but with a few improvements -- ISO sensitivity now hits 12,800 and it has a wider lens as well as better image stability. Like the Z2, it's also able of capturing 4K video.

Now, the Z3's camera seems pretty decent, but with a few caveats. Despite it having 20.7 megapixels, Sony uses pixel-binning for most of its modes, and produces a picture of around 8 megapixels.

Auto-focusing still seems a little slow compared with the iPhone 6 I have to hand, but I would imagine Sony is likely to take a page from Samsung and Apple in a future phone and add phase detection for better focusing.

Also, the camera doesn't always seem to get the focus right the first time, but a quick tap on the screen seems to solve this. Colors also seem a little drab, but you can tweak the settings to obtain warmer tones.

One last thing to note is that the physical camera shutter button is pretty handy to have, and the automatic mode seems capable of handling whatever shots you need.

With the Z3 packing a quad-core Snapdragon 801 2.5GHz processor, the phone was quick and snappy. While it's not the latest Snapdragon 805 processor found in newer devices, you'll have no performance issues with this phone, that's for sure.

On the Quadrant benchmark, the Z3 scored 20,425, which is similar to other phones that use the same processor. The result of the Linpack multi-threaded test is also similar, scoring 843.333 MFLOPs over 0.2 seconds, which is pretty good.

The results of the Z3 are comparable to other phones using the Snapdragon 801 processor, such as the Samsung Galaxy S5, which had a higher Quadrant score of 23,707, or the LG G3, which managed 23,103. Bear in mind though that benchmarks don't tell the full story -- some manufacturers have been to known to tweak their phones to get them to score higher in these tests.

I found no issues with call quality, and I even used this phone to do a radio interview. The radio hosts had no problems with the quality, and that's always a good sign. The front-facing speaker volume was also pretty good, though not as loud or as clear as HTC's own front-facing BoomSound blasters.

Here's where the Z3 shines. Sony claims that the phone is easily able to last two days, and while I didn't quite get there, I easily lasted one and half days of heavy usage. I spent at least a full morning browsing on the phone and checking emails while waiting for an appointment, followed by a lull period back at the office, and then Web surfing on my evening commute. I left it uncharged at night, and the phone survived till around noon-ish through my usual morning activities, which included taking pictures and tweeting at an event. If you're a moderate user (checking emails and Web browsing occasionally during the day), I think you'll be easily able to hit that claimed two-day mark.

Sony's Xperia Z3 doesn't have a brand new design, but it's an evolution of what the company has been working on the last few years. It's a great phone, but it's still early to say if the Z3 will make a Sony global force in smartphones. After all, HTC is a prime example of a company making great handsets, but struggling to stay afloat.

That said, if you haven't already upgraded from the Z1 to the Z2, skip it and jump straight to the Z3. It packs a brilliant display, waterproof features and a good camera into a slim and sleek design. While the UI could use a little tweaking to better suit the phone's sexy design, the Z3 definitely impresses.

While we await to test the PlayStation 4 remote play feature, I daresay the Z3 is one of the best Sony phones to date. It's as good as the LG G3, but with the promise of much better battery life -- plus, I'll be honest, the "Quad HD" screen of the G3 is cool, but it's not really required right now.