We tried the laser razor so you don't have to

Skarp's Laser Razor raised $4 million on Kickstarter, then got yanked. Is it a scam?

A razor that cuts with a laser sounds like something out of a kitschy sci-fi movie, right up there with jetpacks and hoverboards in terms of gadgets that shouldn't exist. But when the Skarp Lazor Razor promised a silky-smooth, irritation-free laser shaving experience on Kickstarter, fans wanted to believe. The founders managed to raise $4 million from some 25,000 would-be buyers.

Skarp never saw a cent. After commenters across the Internet raised concerns that the laser razor might be a scam, Kickstarter decided to pull the plug. Even though no Kickstarter rep or outside observer had ever gone to see whether the laser razor actually worked, that $4 million went back to the backers.

Why? Kickstarter's rules require gadget startups to show off a working prototype. And even though Skarp did later show a video of the device in action, Kickstarter wasn't convinced. "We took a closer look and decided that the prototype didn't meet our standards," a Kickstarter representative said. So the crowdfunding website decided to forfeit its $200,000 cut of the profits.

But the thing about jetpacks and hoverboards is that -- however impractical -- those technologies actually do exist, at least in nascent forms. The jetpack that James Bond famously used in the 1965 film "Thunderball" was a real, working jetpack, and we tried a real hoverboard last year.

I decided to do what nobody else had bothered to do yet: I flew to Skarp's offices in Southern California to see if a laser could actually shave my hair.

Before I tell you what happened, I should probably define "laser shaving." The first thing you need to know about the Skarp Laser Razor is that this device doesn't drag an actual beam of light across your skin or attempt to burn the hairs. According to Skarp, the company made two breakthroughs that make laser shaving possible.

The first is a special wavelength of light that destroys the chromaphore (the part of the hair that gives it its color) of any hair, even white ones. Laser hair removal isn't a new idea, but it typically only works on dark hairs by targeting the melanin that makes them dark to begin with. After years of trial and error, Skarp co-founder Morgan Gustavsson claims to have discovered a wavelength that can cut through white and blond hair, too.

The second breakthrough is the idea of transmitting the laser light horizontally: by routing it through an optical fiber that acts as the cutting edge, instead of directly pointing lasers at a target.

This concept of horizontally transmitted light is important because governments tend to regulate devices that have powerful and potentially dangerous lasers inside of them. In Skarp's laser razor, however, light is only emitted when a hair comes in contact with the fiber optic through a process called frustrated total internal reflection -- basically just a fancy way of saying that light escapes the optical fiber only at the spot where something touches it.

Since the device doesn't emit a naked laser beam that could hit your eye, it's potentially far less dangerous.

It's easy to see why some thought the laser razor was a scam. Though Skarp promised a close, irritation-free shave with a laser powered by a single AAA battery, the company's current prototype does anything but that.

When I walked into Skarp's offices for the first time and asked to see the prototype, co-founder Paul Binun led me to a workbench where a laser had been aimed through a loose optical fiber sitting atop the table. The fiber had no razor handle, and the laser drew its power from a large box plugged into the wall.

When I asked Skarp to show me the razor, employees simply took that same loose optical fiber (still attached to the workbench power box!) and glued it to a razor handle so I could try it on my arm -- not on my face, mind you, and not too close to the skin. Skarp's current incredibly thin, brittle and poorly mounted optical fiber is also prone to breaking without warning, so shaving an arm is the only viable test right now. If you're feeling skeptical at this point in the tale, know that I, too, had huge doubts.

But when I lifted the razor to my arm and placed the fiber against a hair, it cut right through. The laser actually worked. We tried it with light hairs and dark hairs, over and over again. Twice, we accidentally broke the fiber by getting the cheese-wire style blade caught on several hairs at a time, which definitely gave me pause. Still, as long as the fiber didn't break, it usually cut through, and Skarp showed us that the laser's power requirements are low enough that using a AAA battery as the power source might actually be plausible. 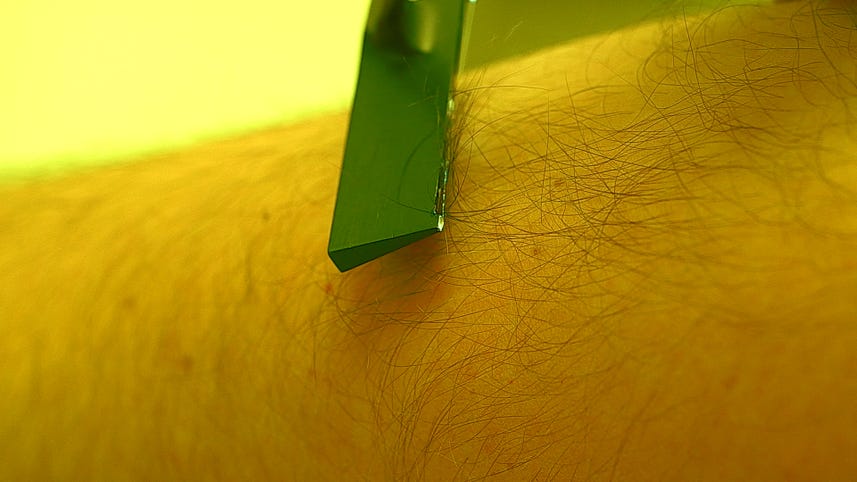 Shaving with a laser
1:54
Watch Now

Of course, nobody's going to buy a razor that only cuts one or two hairs at a time. But Skarp claims that the entire point of the doomed Kickstarter campaign was to raise enough money for the startup to buy high-quality, mass-produced optical fibers and rigidly mount them to the razor's surface so they don't break. Skarp co-founder Binun says that with a mass-produced fiber and a AAA battery, the razor should have enough power to cut through five hairs at any given moment and keep cutting through more as soon as the previous ones fall away.

Still skeptical that a new optical fiber could make all the difference, I reached out to an expert: David DiGiovanni, the CTO of OFS, one of the world's leading suppliers of optical fiber. To my surprise, he told me an optical fiber capable of transmitting that laser light might indeed stand up to the pressure.

"It seems to me that if the support is appropriate, the strength of the fiber shouldn't be a problem," DiGiovanni related. "Let's say it's glued down properly...all of the force is taken up by the blade, and all that's important now is that you don't scratch the fiber," he said. The OFS expert even agreed that $160,000 (the amount Skarp initially tried to raise on Kickstarter) might be sufficient to get a batch of fiber produced for the razor.

What DiGiovanni didn't understand: why Skarp didn't just ask an optical fiber company like OFS to help produce a better prototype to begin with. He told me a demo might cost a few tens of thousands of dollars. This might be hindsight talking, but that doesn't seem like a lot of money when you consider the $4 million that vanished.

The definition of 'prototype'

When Kickstarter suspended the Skarp Laser Razor campaign, it told backers that it was because Skarp didn't have a working prototype. Separately, it provided CNET with the following statement: "We encourage creators to bring early-stage and ambitious ideas to Kickstarter, as those are often the ideas that are most in need of support. But we require that, from the beginning, backers are given a realistic sense of where the project stands in the development process."

It's hard to argue now that Skarp didn't have a working prototype. If you ask me, Skarp demonstrated that the key innovation required to get this project off the ground has indeed been completed, and the company needs some sort of funding to make the product a reality.

But if you go back and look at what Skarp actually told its Kickstarter backers, it's also easy to see how they might have been deceived about "where the project stands" -- given how Skarp showed off a razor that seemed to contain a laser and a battery and promised a close shave, but had only yet constructed a loose optical fiber and laser assembly that can cut one or two hairs at a time.

When I confronted Skarp co-founder Morgan Gustavsson about the rise and fall of his Kickstarter campaign, he admitted that he had very little idea what he was getting himself into and that he would have hired a marketing person if he knew just how complicated managing expectations could be. "We're a bunch of engineers. We can't talk to people," he laughed. But he also told me that there were many disclosures he couldn't provide Kickstarter backers due to fears that other companies would take advantage.

Keeping Skarp's secrets wasn't easy. We had to attach a color filter to our camera while filming the cutting action, for instance, because the color of the laser is still a secret. So is the type and manufacturer of the laser itself, for that matter, and both of these limitations piqued the curiosity of skeptics among Skarp's Kickstarter backers.

When pressed about why Gustavsson didn't raise the money for a more complete, self-contained prototype with that final optical fiber if it was only going to take $160,000, he tells me that he didn't want to give up any of the potential profits to venture capitalists or investors, or give other companies the secrets they'd need to build a laser razor of their own. "We can't because we have a $13 billion industry that we are challenging," says Gustavsson, adding that the big names in the shaving industry are already working on laser razors themselves.

Following the Kickstarter suspension, Skarp relaunched the project on rival crowdfunding site Indiegogo, where it raised just over $430,000 -- a lot less than $4 million, but enough to continue work. Skarp says that with the money, it's still on track to ship the first laser razors to backers by next March. Skarp's also trying to negotiate retail partnerships for the fall of 2016.

I, for one, am eagerly awaiting a version that'll actually let me shave. I can't wait to drag a laser razor across my face.