The racing stripe on T-Mobile's newest hot spot unfolds to reveal two charging hookups if you need an emergency charge to go with your Wi-Fi signal. 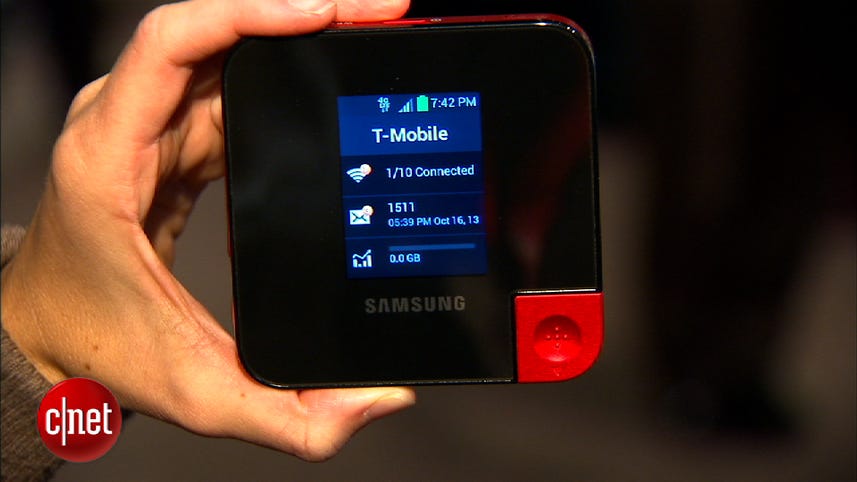 The Samsung LTE Mobile HotSpot Pro for T-Mobile isn't your average hot spot. Why? Because the hot red racing stripe along the sides of the otherwise black puck of a device conceals two very important plugs that could just save your sanity.

One one end of the rubbery tether is a Micro-USB charger, and on the other, a USB charger. If the hot spot is charged, it could give your device some much-needed juice.

Shopping for a faster internet speed?

We’ll send you the fastest internet options, so you don’t have to find them.

The strap pushes into the hot-spot's spines, and stays connected to the device through the USB side of the leash, which you push into a port on the hot spot. It takes a little bit of wiggle to get the USB port into the right position to clip in, but once it's set, the contraption is pretty secure.

Otherwise, the hot spot is much more straightforward. It supports up to 10 devices with 4G LTE connectivity, reading out the signal strength, battery level, data meter, and any awaiting text messages on its 2.2-inch QVGA screen.

Note that unlike portable routers like the AT&T MiFi Liberate, this is not a touch-capable device, so don't go tapping the screen for more details or you'll just be disappointed.

This convertible hot spot, which was introduced October 16, sells for $169.99 at full retail price, or $49.99 down and $5 a month for the ensuing 24 months. It may sound like a lot to shell out for a portable wireless router, but this juice pack's costs match those of the aforementioned Liberate at both the latter's full retail price, and carrier-subsidized pricing.

We'll have a full review of the Samsung LTE Mobile Hotspot Pro as soon as we can.