The Samsung Galaxy Young may be young at heart, but its specs aren't exactly bursting with youthful vigour. 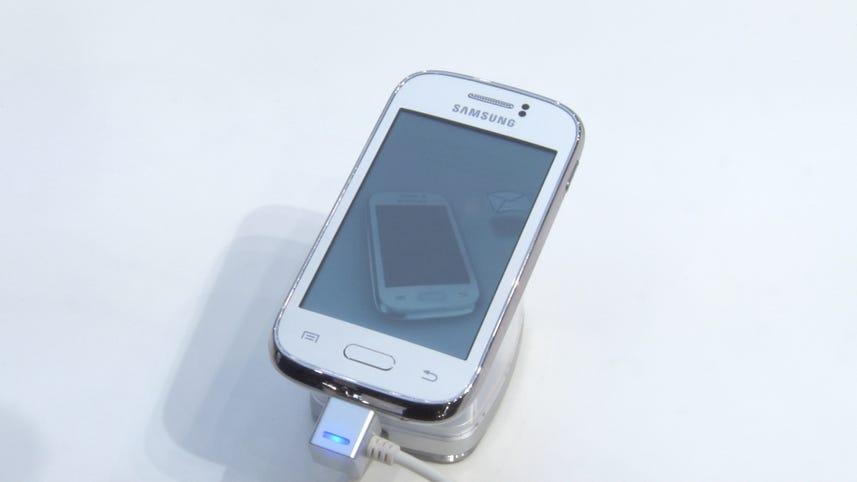 BARCELONA, Spain--They say youth is wasted on the young, but at least with the Samsung Galaxy Young you won't waste your youth with out-of-date software. The Young is loaded with Jelly Bean despite its budget price.

The Galaxy Young is joined by the Samsung Galaxy Fame, and they're nearly identical in looks and specs. Both phones have Android 4.1.2 Jelly Bean software on board, making them an affordable option for what is almost the very latest version of Android software.

The Young is a single-core phone with a 1GHz processor and 512MB of RAM. The processor should be powerful enough to deal with the basics, although the demo model I tried crashed when I tried to insert a smiley into a text message -- not exactly a taxing task. Like the Fame, I also found it laggy and unresponsive while playing a relatively simple air hockey game, so more intensive apps are likely to fox the Young.

The screen is a relatively low-resolution 480x320-pixel job, which means you're constantly reminded that this is a cheap phone every time you look at it. There's 4GB of storage for your movies, music and pictures. Android offers tons of tasty-looking games and apps to download, but don't expect the Young -- or its Fame-ous sibling -- to be able to make the most of them.

Like the Fame, the Young has a 1,300mAh battery, which is enough to get you through a day. But battery-busting tasks like video or games will require charging every night.

One of the few differences between the Fame and Young is the camera. The Young has a meager 3-megapixel snapper. We have yet to test it properly, but similar sensors in other relatively cheap phones tend to result in disappointing photos -- especially in low-light situations such as at a party or even just indoors.

The Young looks identical to the Fame, with cute rounded corners and a glossy plastic back. The silver band around the edge adds a touch of class but is a magnet for greasy fingerprints.

There's a physical home button below the screen, flanked by light-up Android soft keys set into the face, to launch the multitasking menu and go back a step in your app. The soft keys only light up when you touch them and disappear when not in use, which means you have to either press once to wake them up and then press again -- inefficient -- or just remember which key is which when they're not lit up. This feels clunky.

The Samsung Galaxy Young is a decently put together budget phone and you can't argue with Jelly Bean for an affordable price. But you're reminded of the price by the performance of the screen and the processor that won't make the most of Android's more intensive features.