Samsung Galaxy J3 (2018) review: Underwhelming -- even for a budget phone

Samsung may rule when it comes to high-end Androids, but its midrange Galaxy J3 offering is disappointing.

High-end phones may be Samsung's specialty, but when it comes to making great entry-level and midrange devices, the company still has work to do. Case in point is the Galaxy J3. Also known in the US as the J3 Star (at US carrier T-Mobile), Express Prime 3 (AT&T, prepaid), J3 Achieve (Sprint) and Amp Prime 3 (Cricket Wireless) and available for about $130 to $210 depending on the carrier, the Galaxy J3 doesn't add much from last year's predecessor. (In the UK and Australia, that price converts to about £98 to £159 and AU$175 to AU$282, respectively.)

The Samsung Galaxy J3 for 2018 is cheap and has a removable battery.

The phone has the same key hardware as last year, and has a mediocre camera and processing speeds.

The Galaxy J3 is underwhelming even for a budget phone. Save money and get a better phone by way of the Moto G6 Play.

Besides a bump in megapixels for its cameras, an (expected) Android OS update, only a 0.5GB increase in RAM and more expandable memory, everything else remains the same. That includes the same screen size and resolution, internal storage, processor and battery as last year.

Editors' note: This review was originally published on July 11, 2018 and has been updated with a revised score to reflect final battery test results.

It's a wonder then, why you'd want to pay for such a phone when Motorola's Moto G6 Play is available for $199, £169 and AU$329. The G6 Play gives you a faster experience overall, a superior camera and a longer-lasting battery -- 15 hours and 16 minutes versus an average of 13 hours and 37 minutes on this year's Galaxy J3.

And as a proverbial cherry on top, the G6 Play is also splashproof, so you don't have to fret if you get a few droplets of water on it. The J3 claims, however, no water-resistance at all.

Featuring a quad-core Samsung Exynos 7 processor, the J3 is also one of the slowest phones we tested in recent years. (To be fair, we dinged the G6 Play for producing some low benchmark results too, but the Galaxy J3 had even lower scores.) Beyond just lab numbers, the J3 took a beat longer to execute tasks like launch the camera, return to the home screen and populate web pages on Wi-Fi.

As for the camera, the Galaxy J3's 8-megapixel shooter isn't terrible. Pictures taken in ample lighting, both indoor and outdoor, are clear enough to make out. But finer details are muddled and washed out. White light also looks blue and dimly lit objects are often blackened out and are hard to distinguish. Selfies were also decent, but some details were still hazy and blurred.

In general, the Moto G6 Play is markedly the better phone than the J3. (Unless you count its lower expandable storage capacity, which is 128GB compared to the J3's 400GB… though this shouldn't matter.) And if you have extra dough to spare, consider the slightly pricier ($249, £219 and AU$399) Moto G6. It edges out the G6 Play with a faster processor, more storage and has two rear cameras for a portrait photo effect.

Watch this: Galaxy J3 is an underwhelming midrange phone
01:46 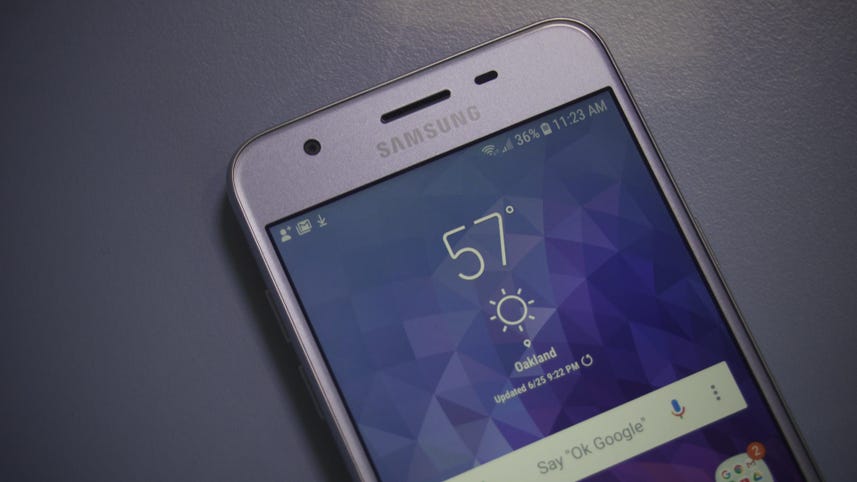