This is what it's like to use a $4 Android phone

Many were suspicious of Ringing Bells' unbelievably cheap Freedom 251, but a model we tested was a pleasant surprise.

Manish is a technology reporter based in India. He covers security, privacy, piracy, gadgets, and interesting things happening in the country. At other times, you'll find him playing Forza Motorsport 5. He plays the same level multiple times to earn more points. He likes points.

Four. That's how many US dollars the Freedom 251 costs.

It's a shockingly low number, especially if you're used to doling out $600 for a flagship phone. And despite raising many eyebrows when it was unveiled by Indian company Ringing Bells back in February -- with some doubting that the phone would materialise at that price -- not only is the Freedom 251 real, it's also surprisingly decent.

The company faces a loss of around 150 rupees ($2.25) per unit, and is hoping the government will offer a subsidy of some kind. The Freedom 251 that I got my hands on, which Ringing Bells says is the version that will ship to customers, is noticeably different to the one it showed earlier this year. That's a good thing -- there have been some big improvements.

The smartphone feels well built, despite its too-good-to-be-true price. The curved sides and placement of the rear camera are reminiscent of the Moto E, though it's noticeably thinner.

$4 (about £3 or AU$5) isn't going to buy you a swish metal case, but the Freedom 251's plastic body doesn't feel cheap either, and it does make the phone quite light. The grid finish on the back, coupled with its 4-inch screen, make the device easy to hold in one hand. The buttons on the sides are plasticky, but they give good enough feedback.

The phone is certainly no powerhouse, but in my testing I didn't find it to be too slow, either. Here are some of its specs:

Like most entry-level smartphones from Asia, the Freedom 251 has a dual-SIM card slot and it supports Wi-Fi and 3G. It also has a 1,450 mAh battery, which the company claims will keep the phone ticking for a day on a single charge.

On the software side, the unit I got to play with had a build based on Android 5.1 Lollipop with no extra bloatware installed on it. However, the company has partnered with other software firms for an additional source of revenue -- so if you buy this phone, you will find preinstalled apps and services.

I noticed that the icons on the phone still looked similar to Apple's iOS. But they're not a blatant rip-off, as they were in the February unveiling. 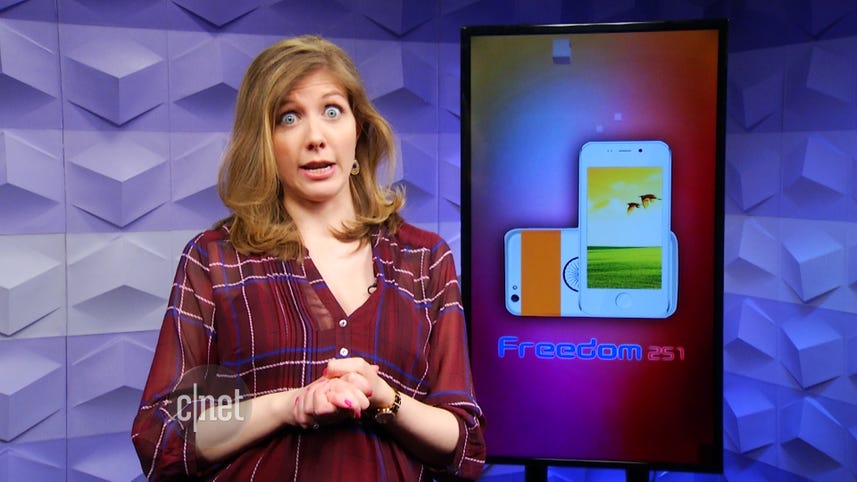 One of the most noticeable corners that Ringing Bell has cut with the phone is in its sound. The speaker, placed at the bottom, makes a loud enough noise but the quality is poor.

The Freedom 251 nonetheless seems like a well-built phone with decent hardware for the price. Ringing Bells says it will ship its first batch of 200,000 phones on July 7.