This remake will terrify you, but you won't be able to stop playing.

Sean knows far too much about Marvel, DC and Star Wars, and pours this knowledge into recaps and explainers on CNET. He also works on breaking news, with a passion for tech, video game and culture.

Welcome back to Raccoon City, please excuse the horrifying monsters.

Resident Evil 2 pulls you into its detailed, atmospheric world and offers a huge amount of fun, challenging content. It manages to stay true to the 1998 original sequel and offers subtle nods to the games that have come in the years since.

There are a few uneven gameplay moments, with one enemy hurting the pacing and a brief section that doesn't work as well as the rest.

Resident Evil 2 drags the series' classic formula into a new era and there's never been a better way to experience survival horror.

The Resident Evil series is known for reinventing itself for the times, with varying degrees of success. This approach got us a spectacular remake of the 1996 original six years after its release, 2005's Resident Evil 4 (one of the greatest games of all time), 2012's Resident Evil 6 (an overstuffed but fun mess) and 2017's scary first person Resident Evil 7.

So a lot's changed with the survival horror series in the 21 years since Capcom unleashed the original Resident Evil 2 on the PlayStation. From Jan. 25, PS4, Xbox One and PC gamers can sink their teeth into the remake and we're pleased to report that it's a tasty meal -- Raccoon City's 1998 descent into zombie apocalypse has never looked, sounded or felt this good.

Like the original, you play as rookie cop Leon Kennedy or biker Claire Redfield. Both are just getting into town, not realizing that it's become an undead nightmare until they're trapped. You'll spend the majority of the game trying to escape via the zombie-infested Raccoon City Police Department, and this iconic setting is beautiful in a terrifying way.

The horrifying gore, deep shadows, eerie growls and ferocious shrieks make it an oppressive, nerve-wracking place to explore -- especially with the notes you find hinting at the horrors that have gone down, pushing the engaging narrative forward and offering hints about how to progress.

The developers' decision to ditch the original game's fixed camera angles in favor of an over-the shoulder viewpoint might bother the hardcore old-school series fans, but the ability to look around freely really brings the environments to (undead) life. Clever design choices make it so satisfying to explore, with areas that link up like Dark Souls and offer plenty of rewards for those who investigate every nook and cranny.

The tank-like controls seen in the first few Resident Evils have been updated for the new perspective, and feel a little like those of the sixth game (albeit with much less agility).

The most common threat are zombies, a series staple that are more impressive than ever as they lurch around unpredictably and leap from the shadows to grab you. You can gun or knife them down, but can never be sure they're dead unless you blow open their heads with a lucky shot. Blasting off legs and arms is a whole lot of fun, though they'll probably come crawling after you.

Anything other than a headshot feels ineffective, so enter combat with caution and aim carefully. A little nimble footwork or quiet creeping can get you past many enemies if you're low on bullets… which you will be. Tougher enemies like Lickers (whom you're much better off sneaking past) and the various bosses can soak up ammo, forcing you to manage your resources carefully.

And that's a very good thing: Resident Evil 2's harsh gameplay seldom feels unfair, but it'll challenge Raccoon City veterans and newcomers alike. The incrementally upgradable inventory is pretty much the same as it was in the seventh game, so it's smooth, easy to use and doesn't hurt the pacing.

There are plenty of modifiable weapons to blast undead with, and each character has a different set. As is the series' tradition, handgun ammo is by far the most plentiful and those guns are fun to use (though Claire has a confusing number of them to choose from).

But the real joy is in Leon's shotgun and flamethrower -- great for blowing chunks off or burning enemies -- and Claire's grenade launcher -- which has interchangeable ammo that can ignite or drench them with acid. Figuring out which enemies each weapon is best suited to is a real treat too.

The character models are impressive to look at, with nice design updates to the PSOne-era original looks, and little touches make them seem more human than ever. It's one of those games where you'll find yourself spinning the camera around just to admire how much work the developers put in.

The voice acting (something the old games in the series were infamous for) is also pretty great -- Leon and Claire's muttered profanity when a zombie just won't die mirrors the player's reaction delightfully, and they'll occasionally offer unexpected reactions to whatever else is going on.

However, there are a few wrinkles. The invincible, unrelenting Tyrant that pursues Leon and Claire in some sections is suitably scary and forces you to rethink how you play. His footsteps will come to terrify you as he walks around like he owns the place.

Unfortunately, he often forces you to take diversions to an extent that hurts the game's pacing and occasionally leave you irritated.

There's also a brief section in Leon's campaign where you play as spy Ada Wong and are forced to use her gadget for some disappointing puzzles. These just aren't very fun or well-designed, and feel out of step with the rest of the game's clever, engaging brain teasers. Ada's a super cool character, so she really deserves better.

Much more successful is the part where you play as Claire's young partner, Sherry Birkin. This section is quite straightforward and focuses on atmosphere -- the ludicrously creepy police chief Brian Irons is the key here.

Capcom is aware there are plenty of players who know the original game like the back of their hands, so things are nicely remixed from beginning to end. Each character also still has a second scenario (called a 2nd Run in the remake), in which they experience different events -- you'll have to complete this to see the game's true ending.

So, that's two distinct characters, each with two different campaigns to play. Coupled with the other unlockable bonus content -- also inspired by extras from the original -- there's a huge amount of value here.

Despite a few niggles, the Resident Evil 2 remake drags the 1998 classic into 2019 wonderfully and represents the pinnacle of the survival horror genre. If you're looking for a tough, old school adventure with plenty of scares, come and explore in the Raccoon City Police Department.

Just don't forget that you've gotta shoot them in the head.

Resident Evil 2 tears onto PS4, Xbox One and PC on Jan. 25. For more on this survival horror remake, check out sister sites GameSpot and Giant Bomb.

Watch this: Resident Evil 2 review: Terror for the modern era
03:23 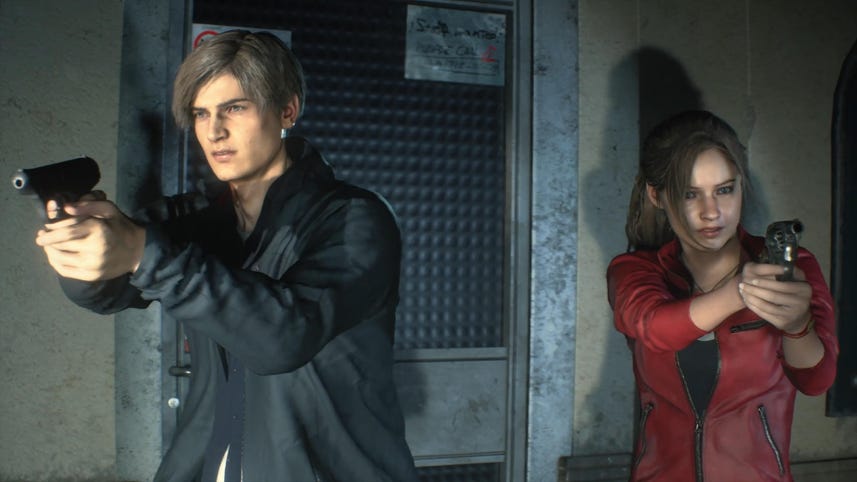 More from GameSpot: Resident Evil 2: All the story you need to know before playing