The novelty level is high, but we're still inescapably drawn to these smartphone-driven light bulbs.

Rich moved his family from Brooklyn to Louisville, Kentucky, in 2013 to start CNET's Appliances and Smart Home review team, which includes the CNET Smart Home, the CNET Smart Apartment, and the Appliances Review lab. Before moving to Louisville, Rich ran CNET's desktop computer review section for 10 years. He has worked as a tech journalist since 1994, covering everything from 3D-printed guns to Z-Wave smart locks.

Like many of the new breed of user-installable, smartphone-controlled home tech products, the WiFi-connected Philips Hue lighting kit has high geek/novelty appeal. After all, it's a color-changing, LED light bulb package you can program from a smartphone. But beyond its remote on/off and scheduling functions you'll need to get really into the extended features--like geofencing and IFTTT support--to make this kit worth $199 (AU$249 for those in Australia).

<b>Philips' Hue Connected Bulb</b> lets you change the color of your lightbulbs and control them from your phones. It's easy to use, and -- most importantly -- nails the basics.

Three-bulbs-and-a-hub is expensive at $199, the novelty factor will wear off for many users quickly, and Android users apparently come in second on Philips' app development priority list.

You might not have an obvious need for an Internet-connected, color-changing light bulb, but the Philips Hue Connected Bulb kit offers enough potential to justify its high price tag.

Those features won't appeal universally, but they will have their niche fans. What house party DJ or dorm room Lothario wouldn't love an automated, multihued mood-setter? For the hyper-connected, setting the lights to blink with every retweet could also be a draw. By smartly allowing the public to make its own apps for the Hue, Philips has also left the doors of possibility wide open.

Even if you don't appreciate the Hue's advanced features now, someone might one day write an app for it that perfectly fills some unrealized need. I wouldn't recommend the Philips Hue Connected Bulb kit if all you want is basic remote lighting controls, but it's a reliable, mostly easy-to-use choice if you want to inject some intelligence into your home lighting scheme.

The Philips Hue Connected Bulb Starter Kit includes three LED light bulbs and the Hue Bridge. The Bridge is a hub that plugs directly into your wireless router and translates signals between your Wi-Fi-connected smartphone and the ZigBee-based bulbs.

You might wish Philips had found a way to eliminate the Bridge, like the purely Wi-Fi-based Lifx bulbs or Bluetooth-based iLumi. Those bulbs cost $89 and $79 a piece, respectively, which means that Philips' ZigBee-based solution, ($59 per when you buy them individually), seems to impart some cost savings. You can always pick up an extra-long Ethernet cable and hide the Bridge in a closet somewhere if you find it unsightly. If you think you'll expand into other connected home products like a Sonos system, or a smart lock or two, keep an eye on the forthcoming multidevice controller hubs that support Hue, like the one included with the Logitech Harmony Ultimate universal remote, or the Revolv Smart Home Solution Wi-Fi Hub due out later this year.

Once you've connected the Bridge and installed a few bulbs, you simply download and install the free Philips iOS or Android app, which will then prompt you to hit the Bridge's sync button. The app, Bridge, and bulbs should all find each other a few seconds later. Since the Hue kit has been on the market since fall 2012, you might receive a Bridge with outdated firmware. You can use the app to check, but you might also need to cycle the power once or twice before you get an accurate reading.

The official Hue app is not the most intuitive piece of software. Its primary screen displays a grid of preset lighting schemes ("recipes," per Philips) designed for all three light bulbs. Some recipes, like Reading, or Concentration, trigger familiar, utilitarian shades of white and yellow light. Others -- Sunset, Deep Sea, Kathy (?) -- dip into the spectrum of 16 million colors available to the Hue.

Select any of those presets and your bulbs will change almost instantly. Selecting also launches an onscreen brightness slider, framed by buttons to edit the preset, and to turn it off. Philips will let you monitor lights, adjust their brightness, and turn them on or off remotely once you've signed up and logged into the Web-based client. To make new presets or edit existing ones, you have to be on your home network.

Editing and creating new presets is where the Philips app experience can become cumbersome. Philips has spread the various customization functions across different sections of the app. The settings icon presents you with a simple, per-bulb color selection tool. But when you go to make a preset lighting scheme, Philips only lets you assign colors by choosing them from a reference image file. You can pull images from your photo library, or capture them in the app directly, or even download them from Philips' Web site, but without that source image, you have no way obvious way to assign a particular shade to a preset.

Once you do pick a color set, the app lets you assign specific behaviors easily enough. iOS users currently have more-robust options here than their Android-based counterparts (Philips says it's working on tying app development schedules more closely together.)

On the Android Hue app, you get the per-bulb lighting and brightness options, as well as basic scheduling. With the upgraded version 1.1 iOS app, Philips brings in advanced programming functions like the ability to set timed alarms. It also introduces geofencing, which will work in conjunction with your smartphone GPS to turn your lights off when you leave your home, and turn them back on when you return.

If Philips' app isn't perfect, it exposes enough features to make the Hue Connected Bulb interesting. Search "Hue" in the Apple Store or in Google Play, and you'll find apps that let you do even more. 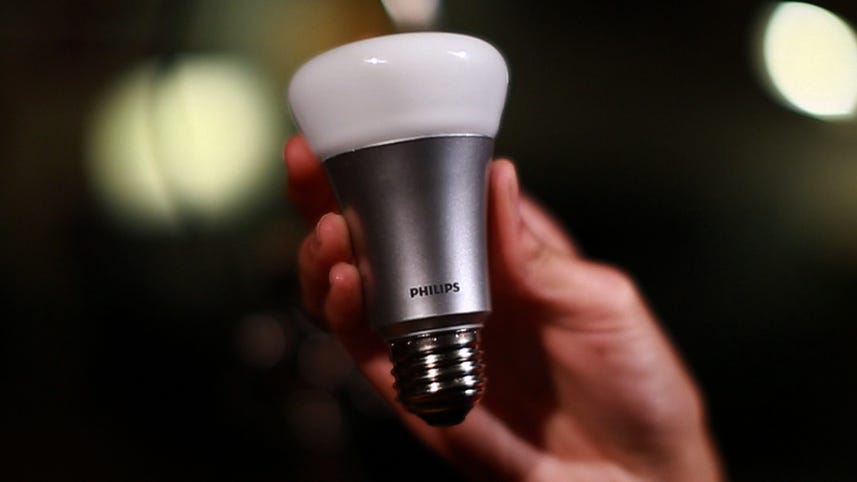 Thanks to Philips releasing the Hue API and a software development kit for iOS and Android, you will find all kinds of alternative Hue apps available for download. Many of these are improved versions of the basic control screen. Hue Pro for Android and its intuitive interface is a good example, since it lets you set presets and see how they will affect every bulb right on the home screen. Other apps, like Ambify, Hue Music, and Hue Market, expand the Hue's programming functions to changing colors in time to music, or in response to changes in the stock market.

Like Belkin's WeMo home automation devices, the Hue also has its own IFTTT channel. IFTTT (If This, Then That) is an Internet-based standard that lets you tie online services to each other. The idea is that through a simple interface, you can create "recipes" that perform simple functions. You can then use your own recipes, or download recipes from others to do things like automatically back up your iPhone contacts to a Google Drive spreadsheet, or have a weather report show up automatically as a text message every morning.

Sign up for the Philips Hue channel on IFTTT's app or Web site, and you will find almost 500 different recipes. Some will seem frivolous ("Upload a photo to Facebook and set the mood in the room"), but many of them offer simple, but still useful notifications, like blinking the lights when you've been tagged in a Facebook photo, or changing colors to those of your favorite team when the game starts.

Along with all that potential, one pitfall is that with so many disparate apps triggering different lighting behaviors, it can be hard to track them all. If you're sick of a particular recipe or program setting, you might have to sort through three or four different apps before you find it to shut it down.

For all of that new-fangled connectedness, it's most important that the Philips Hue bulbs meet our basic expectations for standard home lighting. The good news is that they do.

The white, yellow, and blue-toned lighting (accessible via the Concentrate, Energize, Reading, and Relax presets) all have the familiar warmth and color tone of standard incandescent or utility bulbs. Each 8.5-watt, 600 lumen Hue bulb can shine with the intensity of a 50-watt incandescent. A single, undimmed bulb won't sufficiently light an entire 12x12-foot room, but two Hue bulbs should do the job.

You also don't need to worry about the range of a bulb from the Bridge. With the controller on one end of our appliance testing warehouse, and a bulb at the other, we put about 100 feet and five or six walls between them. We noticed no significant delay in responsiveness. A 1,500-square-foot house might put that many walls and a floor or two between the two pieces, but the longest distance might be more like 50 or 75 feet apart.

At $49 a pop if you purchase them individually, or $199 for the kit, the Philips Hue Connected Bulb has some useful conveniences, but it's also packed with some likely short-lived novelty. It's expensive compared with a CFL or a old school incandescent bulb. It's even pricier than many other LED bulbs, although not all of the Hue's competition is connected, nor as feature-rich. You can buy a $129 home automation hub from Insteon, for example, and one of that company's LED bulbs for $29, but they don't offer as many color options as the Hue. They're also not IFTTT-compatible.

On the higher-end, the Hue will face broader competition from companies like Lifx and its $89 Wi-Fi-based, hub-free light bulb, as well as the Bluetooth-based iLumi. Neither is in wide release yet, but both had successful crowd-funding campaigns, and should be ramping up production shortly. The novelty factor will make any of these bulbs a hard sell for some consumers. If you like the idea, though, the Philips Hue Connected Bulb nails the basics of lighting and ease of use, and also supports a robust set of extend functions. It's the connected LED light bulb to beat, particularly if you're an iOS user.