The Oxo Brew 8-Cup Coffee Maker outdoes the Bonavita Connoisseur, and at a lower price.

A quality drip coffee maker should brew fast and hot, but it shouldn't scorch your grounds. Few coffee machines can pull off this delicate balancing act, but the $170 Oxo Brew 8-Cup Coffee Maker is one of the rare machines that does. For $20 less than the well-respected $190 Bonavita Connoisseur, the Oxo Brew delivers SCA Golden Cup-rated coffee that tastes just as good.

Oxo's latest electric coffee maker also comes with a thermal carafe that, unlike the Bonavita's, isn't prone to messy drips and spills while you pour from it. The Oxo coffee maker is compact, easier on the eyes than the Connoisseur, and it feels sturdier, too. All that makes the Oxo Brew 8-Cup an outstanding purchase, and enough to earn our Editors' Choice award for drip coffee makers in 2020.

Physically, the Oxo Brew 8-Cup is everything its beefy Oxo 12-cup and 9-cup predecessors weren't. Those machines were huge and bulky monstrosities, especially the Oxo Barista Brain 12-Cup Brewing System, which towered over other small kitchen appliances and ate up valuable counter space.

The Oxo Brew 8-Cup is comparable in size to the Bonavita Connoisseur. Both coffee makers are compact enough to tuck away under kitchen cabinets when they're not in use. Because of the Oxo's sleeker lines, plus lots of open space between its various parts, the Brew 8-cup appears downright svelte next to the chunkier Connoisseur.

Aesthetics aside, the Brew 8-Cup is set up like many other high-performance drip coffee makers. A heating unit tower and water tank (40 ounces, or 1.2 liters) sits on one side of a long base. You'll find a double-walled thermal carafe across from that. A funnel-shaped brewing chamber lives directly above the carafe.

Making coffee with the Oxo Brew 8-Cup is a straightforward process. First, fill the coffee machine's water tank. Its maximum (and default) size is 40 ounces. That's the same water capacity as other premium coffee makers such as the Technivorm Moccamaster KBT 741 and the Bonavita Connoisseur.

Next, flip open the brewing chamber lid. The filter basket inside that accepts standard eight-cup size, flat-bottomed paper filters. Release the basket by swinging its handle arm upwards Then drop a filter inside, add your ground coffee, and place it back into the machine.

Make sure the switch on the brewing chamber is set for a full carafe. Likewise, hit the power button and tap the button labeled "5-8 cups." If you'd like to brew less there's also a 2-4 cup button for that purpose. Oxo also includes an optional brew basket designed especially for single-cup brewing. It accepts Kalita wave filters (Kalita 185).

I do have one minor gripe here. The Oxo's filter basket doesn't sit flat on countertops. That made it tricky to fill with grounds unless I held it in one hand. The Connoisseur's filter basket has a flat bottom, so is easier to fill while it's resting on your countertop.

Both the Bonavita Connoisseur and its predecessor, the BV1900TS, performed extremely well on my tests. So did the Oxo Brew 8-Cup Coffee Maker. In terms of raw brewing speed, the Oxo Brew was able to fill its pot in an average of 6 minutes, 8 seconds. That's close to the brewing speed of the BV1900TS as well as the Technivorm Moccamaster KBT 741 (both coming in at 5 minutes, 45 seconds), and faster than the Connoisseur (6 minutes, 25 seconds).

As outlined in the manual, I used a brewing ratio of 40 ounces of water to 2.26 ounces (64 grams) of medium ground coffee. I also tested with my usual whole bean test coffee sourced from Costco (Kirkland Colombian Supremo).

Regardless, the Oxo Brew 8-Cup's brewing time is well under the 8 minutes or less the Specialty Coffee Association (SCA) recommends for good drip.

Our refractometer, which measures the amount of coffee dissolved in the liquid, showed similarly consistent performance from the Oxo. Across three runs using the Oxo-recommended 64 grams of coffee grounds, the Oxo Brew 8-Cup notched closely grouped TDS (total dissolved solids) percentage results (1.4, 1.5, 1.6%). These numbers translate to an average extraction percentage of 25%.

That's slightly outside of the ideal range, commonly held to be between 18 and 22%. The Oxo Brew's manual also suggests using a less precise "eight scoops" of coffee with the bundled plastic scoop. When I measured eight scoops of my test coffee, it weighed out to precisely 69.6 grams. After brewing again with 40 ounces of water, I recorded a TDS percentage of 1.3. This calculates to an extraction percentage of 19%, which falls squarely inside the SCA range. 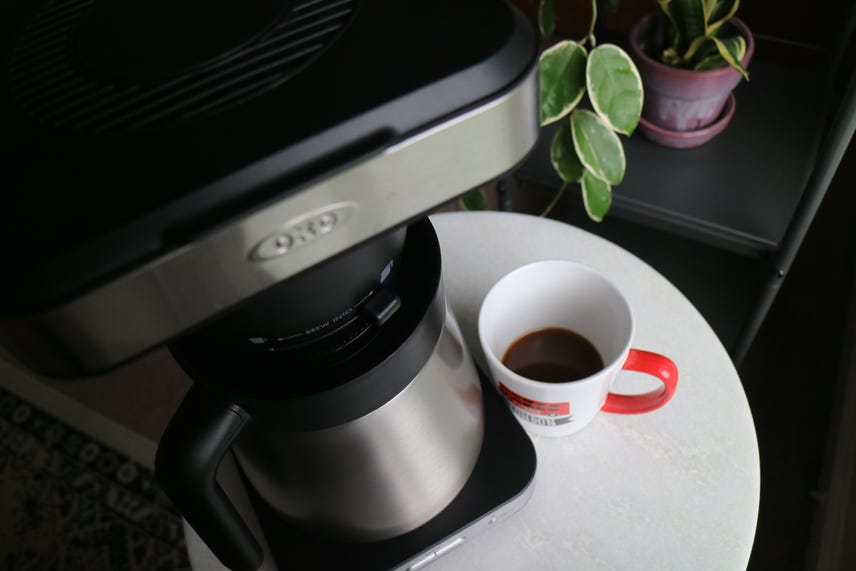 The coffee was strong, complex, balanced, and had no hint of bitterness. The drip I made with fewer grounds (64 grams) tasted fine too, just a little weak. I also made coffee at a strong ratio of 83 grams of coffee to 40 ounces of water. Bold, intense, and super-concentrated, this was my favorite pot. With an extraction percentage of 23%, it was also a hair outside golden cup range. Regardless of the ratio, the Oxo brewer made coffee that was never bitter and very drinkable. You might have to adjust the coffee and water ratio to your exact preferences, but Golden Cup-territory is very achievable with the Oxo brewer.

Similar to the Connoisseur, the Oxo's thermal carafe can keep liquid inside it hot for hours. I recorded 3 hours, 45 minutes before coffee in the container dropped below 150 degrees F (66 C). That's slightly shorter run than the Bonavita 1900 which hung on to its heat longer (almost four hours), although the thermal carafe champion is still the Moccamaster (six hours).

A new option for better drip

I have to say I'm very impressed with Oxo's latest electric drip coffee maker. The $170 Oxo Brew 8-Cup performs well, whipping up pots of tasty joe quickly. It's also compact, and attractively styled. I also like that it comes with a single-serve accessory for making automated pour-over, one cup at a time.

All this stacks up favorably against the competition. Until now, my drip coffee maker of choice has been the $190 Bonavita Connoisseur. However, the Oxo Brew 8-Cup brews just as well and faster, and looks better doing it. It costs $20 less too, and does a little more. That's why it's clearly superior in my book, and the winner of our Editors' Choice award.