Onkyo TX-NR585 review: The best AV receiver for the money

The Onkyo TX-NR585 combines newbie-friendly ease of use with the advanced decoding and excellent sound quality an enthusiast craves.

Deciding which AV receiver to buy is about choosing one set of features over another. Among units I've tested in the $400 range, this Onkyo is the one to choose for the sole reason that it has the best features.

The Onkyo TX-NR585 offers a wealth of connectivity and streaming options without sacrificing sound quality. Music and movies sound great, especially when paired with a balanced-sounding set of speakers.

The redundant, proprietary FlareConnect system offers mirroring functionality that can be replicated with Play-Fi. Like almost every AV receiver on the market, the Onkyo sounds even better with home theater than music.

The Onkyo TX-NR585 offers all of the streaming and decoding capabilities you need for a modern, affordable receiver, and it sounds great doing it.

Hang on, shouldn't it be about sound quality first? Sure, but all three midrange Dolby Atmos receivers I've tested recently -- Sony's STR-DN1080, Denon's AVR740H and this Onkyo TX-NR585 -- sound very similar, and very good. Among the three I'd give the Denon and Onkyo a hair above the Sony for sound quality, but the difference is far from dramatic. The tie-breaker has to be "features for the buck."

"The buck" is kinda tough to pin down. The Sony and the Onkyo currently cost $400 while the Denon is $350, but that can change at any time, and all three have varied in price quite a bit recently. Let's call it a wash for now.

Another important consideration: Are you an Apple or an Android?  The Onkyo and Sony offer the most flexible streaming options, including most importantly Chromecast built-in, which the Denon lacks. By contrast the Denon offers updated support for the AirPlay 2 standard. If you lean heavily to one or the other, let that be your guide.

In the end there's only a smidgeon of difference between the Onkyo and those two competitors, and all three are excellent choices. My ratings reflect that, with the Onkyo at 8.6, the Denon at 8.5 and the Sony at 8.4 overall. In the end, the Denon and Onkyo offer noticeably better sound, while Sony and Onkyo are more user-friendly -- but if they were all the same price, the Onkyo would be the receiver I would choose.

I've written about the "safe" nature of most receiver designs before, and the Onkyo does look like many of its relatives. These are all black boxes, and they have knobs on. Compared to the Denon and the Sony though the Onkyo is a little taller at 14.93 inches. Keeping the same design does mean that the  TX-NR585 retains my favorite feature of any receiver -- direct source buttons! Like most people I misplace the remote a lot and so being able to tap a button to get to the source I want is super useful. The Denon does offer four shortcuts, which is almost as good, but the Sony misses out on these completely.

Further enhancing user-friendliness, the receiver has a full-color, high-definition interface (unlike the Denon AVR740H) and a simple, powerful remote control. The Sony is nicer to look at and navigate, however, and so if you're using the menu system a lot this is something in the STR-DN1080's favor.

The TX-NR585 is a 7x 80-watt-per-channel receiver with an exhaustive list of features, including support for the atmospheric Dolby Atmos and DTS:X formats. It offers a dedicated powered Zone 2 out if you're looking to set up another room with speakers.

The Onkyo receiver includes a bevy of streaming protocols, including Chromecast built-in, DTS Play-Fi, Spotify Connect, AirPlay and Bluetooth. The receiver uses the proprietary FlareConnect system, which is essentially "mirror casting" for audio. It lets you "mirror" what's playing on one FlareConnect system to another, whether singly or throughout a whole house. The most useful application of this would be streaming a turntable or other analog source, though the onboard Play-Fi system also has this feature and a lot more besides.

In my opinion, the most consumer-friendly of all of these streaming systems is Chromecast built-in, not least because it's so affordable (from $35 for the Chromecast Audio plus $49 for the Google Home Mini voice assistant). Meanwhile, the days of "one app fits all" are going away, with leader Sonos moving to support from within customers' favorite apps like Spotify instead. Though its rival Play-Fi is offered on more manufacturers' products, it requires the use of a specific app.

Compared with Yamaha, which only includes four HDMI inputs on the rear of models such as the RX-V485, the Onkyo includes a healthy six at the back. The ports offer pass-through of the latest 4K standards, including HDR10 and Dolby Vision. Other connections include pairs of component and composite video inputs, six analog audio inputs, a phono preamp, three digital audio inputs (two optical and one coaxial) and a USB port.

Yes, I haven't tested the Pioneer VSX-933, but as Pioneer home theater is a part of Onkyo it's not surprising to find the receiver's specifications are identical to the TX-NR585.

Watch this: How to buy an affordable AV receiver
02:33 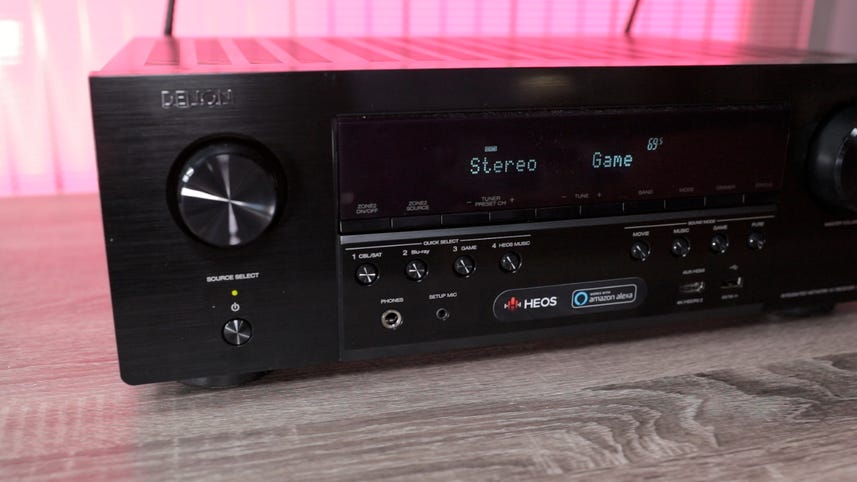 How to buy an affordable AV receiver
2:33
Watch Now

For testing I paired the Onkyo with a surround set based on the excellent Q Acoustics 3050i towers, with the 3020i as rears, the 3090C1 center and our reference SVS SB-4000 subwoofer. I used an Oppo UDP-205 4K player and Roon streamed over both Chromecast and Apple AirPlay from a MacBook.

The Onkyo brought out the best in the 3050i speakers, not adding any midrange harshness or exaggerated treble. This pairing made it so easy to listen to music and with XTC's English Settlement LP I wondered how this delightfully quirky record could be any fuller or any more involving. Listening to the always-relevant Melt the Guns the bass was deep, treble sparkled, and Andy Partridge's adenoidal voice filled the space between the speakers like it was a balloon.

The Onkyo/Q Acoustics synergy continued with Lucy Dacus' remarkable Historian album. Addictions sounded like Dacus was talking to you in a booth at your local bar at 3 a.m. Moving on to the track Night Shift and the Onkyo offered more of a sense of the room and was more dynamic than the Denon AVR740H. The receiver was also able to pull track info from AirPlay and display it on the TV, which the Denon didn't.

Test your music system with these great rock tracks

I listened to several different movies and found the two receivers were very well matched and there wasn't much to distinguish between them. I slipped the 4K remaster of Saving Private Ryan into the Oppo and found the new Atmos mix was virtually identical on each amplifier. Shells boomed, and the bloody Omaha Beach was a terrifying place to be both times. OK, enough death and destruction, time for something more fanciful.

It's a very hard thing to quantify -- fun -- but when pitting the two receivers against each other with my Blu-ray copy of Avatar I seemed to be having more of it when listening through the Denon instead. I've watched the Thanator Chase scene many, many times since this movie appeared a decade ago, but the AVR740H revealed at least one detail I'd never noticed before -- dialogue from Dr. Grace appearing in the left channel as Jake is about to touch the shell-like helicoradian plants. The scene then progressed with its usual bombast and both receivers performed valiantly -- but the significant difference was that I was literally perched at the edge of the seat after the Denon run-through.

For the past 18 months, I've recommended the Sony STR-DN1080 to anyone seeking a capable, affordable receiver. From now on, I'll be instead suggesting buyers get the Onkyo TX-NR585.

You should be assured that this is no night and day contest -- there is only 0.2 of a point between first, second and third place. The competition is that fierce! That said, the Onkyo is able to combine everything a newbie would want -- usability, ease of use -- with everything an enthusiast craves -- advanced decoding and excellent sound quality. Given that the Sony came out in 2017, if you want the best receiver of 2018, it's the Onkyo TX-NR585.