The Nest Protect is a Wi-Fi smoke detector and carbon monoxide monitor that works with an app. It also costs $129. Sound crazy? Maybe not. 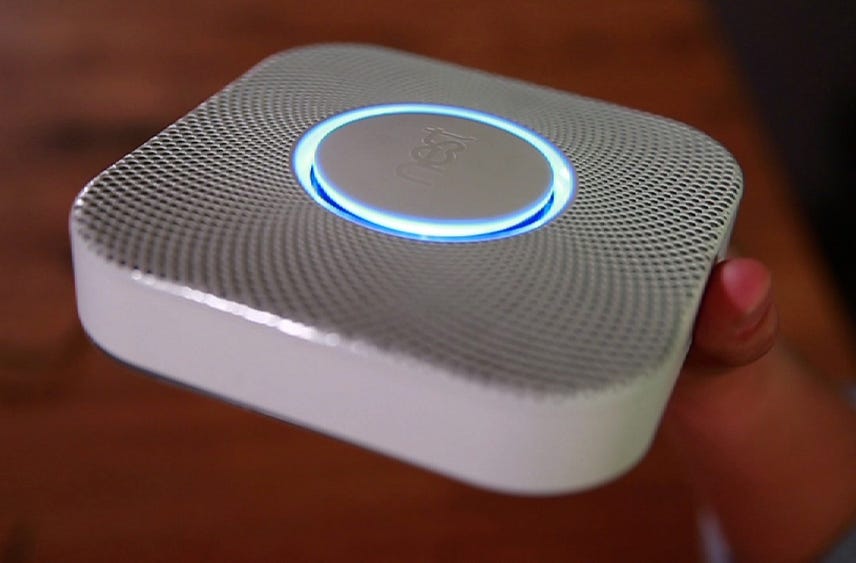 Nest's modus operandi is to reimagine the boring, annoying, or dysfunctional white-label products around your house. Two years ago, the startup sucessfully tackled the thermostat and upended the industry with by tracking your family's patterns. Today, Nest intends to replace the obnoxious, ugly, batteries-constantly-dying, wall-wart smoke detectors with a model that talks to other smoke detectors, communicates with your thermostat, and avoids blaring a siren unless the situation is truly dire.

The opportunity to improve the smoke detector's value proposition is obvious when you think about it: today's smoke detectors chirp obnoxiously when batteries run low, and they don't shut off until you jab them with a broom handle, even when the only imminent danger is the steam from your shower. Some studies show that no matter how loud a smoke detector's wail, children sleep right through them and an alarm with a parent's voice is more effective.

What the Nest Protect does
I spent some time with a demo model of the Nest Protect -- enough to get a sense for how it fits into the home, what makes it different, and why you might want a Wi-Fi smoke detector. (Nest is still working with Underwriters Laboratories to certify the Nest Protect, however, so I won't be able to formally test the device for a few weeks. I'll update this First Take with a rated review when I get my hands on a test unit.)

Nest Protect looks unlike any other smoke detector (pictures)

For $129 for each unit, you'd expect this smoke detector to make you a cup of coffee while protecting your family. It doesn't, and there are other wireless, networked combination smoke-and-carbon monoxide detectors on the market for as little as $65. but the Nest Protect solves a few problems you might not realize you have with your current detectors.

For starters, both the hardwired and the wireless model (both $129) come with Wi-Fi baked in. The Wi-Fi functionality lets the units communicate with each other so that no matter where you are in your house, you'll know when there's something bad in the air elsewhere in the building. For example, your kitchen Nest Protect may sense smoke from burning toast, but you'll hear about it from the Nest Protect in your den, which will tell you that there's smoke in the kitchen. Once the smoke dies down, the den unit will tell you that the kitchen is all clear. Think of the Nest Protect as the of smoke detectors.

When an alarm first sounds, Nest actually speaks to tell you that smoke or carbon monoxide may be gathering. The Nest Protect's voice sounds pleasant -- like a (rare) mother who got a full night of sleep or maybe the announcer on a Virgin America preflight safety video. She'll tell you that there's a problem or that the emergency is over.

Nest put sensors galore into these machines to make all these features possible. With smoke, heat, humidity, motion, carbon monoxide, and ultrasonic sensors onboard, the Nest Protect eases common annoyances. You can wave at the device to stop its alarm, for one, instead of pushing a faraway button. At night, the motion sensor detects movement to turn on a pale nightlight to help you navigate your house in the dark.

If you've already gone all-in on Nest and own a Nest Thermostat, the smoke detectors serve a secondary purpose: they act as sentinels around your house to tell your thermostat when you're still home even if you haven't passed by a thermostat for a while. This would keep your thermostat from putting itself in Away mode because it thinks you've left the house.

I wouldn't buy a Nest Protect for its ability to trigger my thermostat, but it's a nice extra that hints at possible futures for Nest as a company. The more rooms in a house with Nest-powered sensors, the more devices could eventually speak to one another and to a Nest app, from security cameras to remote locks to light bulbs. (Whether that's a future you want is up to your appetite for home automation dominated by a single brand.)

How the Nest Protect looks
At first glance, the Nest Protect looks nothing like you might expect. For starters, it's square and comes in white or black -- quite unlike the round, silver Nest thermostat. According to Nest, the square shape sets this device apart from its old-fashioned competition, and the lacy, flower-like design of the top panel gives more points for smoke and particulate to enter and trigger the alarm. Regardless, this is the prettiest smoke detector you'll find.

A ring around the Nest Protect's center button illuminates gently to communicate various states: light blue for setup, yellow to warn you before there's an emergency, red in a full-blown emergency, and green to let you know when everything's OK. The green light every night tells you that the device has monitored its surroundings and that everything is OK. The nightlight function emits a light, pleasant blue-white glow. In the center of the smoke detector, a button serves a dual hush/reset function.

First smoke detector with an app
Sometime later this month, Nest will push its existing app -- the Android and iOS app that currently interacts with the Nest Learning Thermostat -- to version 4.0 with a new, flatter design and compatibility with Nest Protect. When that happens, the single Nest app will be the first ever to work with a smoke detector. Once Nest Protect devices ship, they'll send notifications to your app to let you know when everything is normal in your house and to send alerts when your detectors find smoke or other dangers. If you have a Nest thermostat, the app will even let you turn off your boiler from afar when the detector senses carbon monoxide in the house.

We will see when test units arrive whether Nest Protect's app link, beauty, and superior communication skills make it worth its premium price considering the $500-$650 investment to outfit a three-bedroom home with the appropriate 4 or 5 devices. As part of a larger remodel or retrofit, the price may well make sense if it better protects your family. Stay tuned to find out.