The Xbox One S is not just slimmer with a new paint job -- it's better than the One in almost every way.

Jacob Krol is an editorial intern for CNET. He has a big love for all things tech, and is a huge Springsteen fan and also a native New Jerseyan. Jacob is currently a rising junior at Muhlenberg College in Allentown, PA.

Microsoft cut straight to the chase at its E3 press conference, officially announcing the Xbox One S the moment the event began. (It had leaked the previous weekend.) As both Sony and Microsoft have done with previous game consoles, the isn't a "next-gen" successor to the Xbox One. Instead, it's a smaller version that corrects many of the mistakes of the big, brutish Xbox that first debuted in November 2013 -- and adds some notable new features, too.

In fact, while we haven't spent any real time with the Xbox (it doesn't become available until August), the photos and the spec sheet point to a product that's a hands-down improvement on its predecessor.

Among the most notable:

Watch this: The Xbox One and One S side by side comparison
01:27 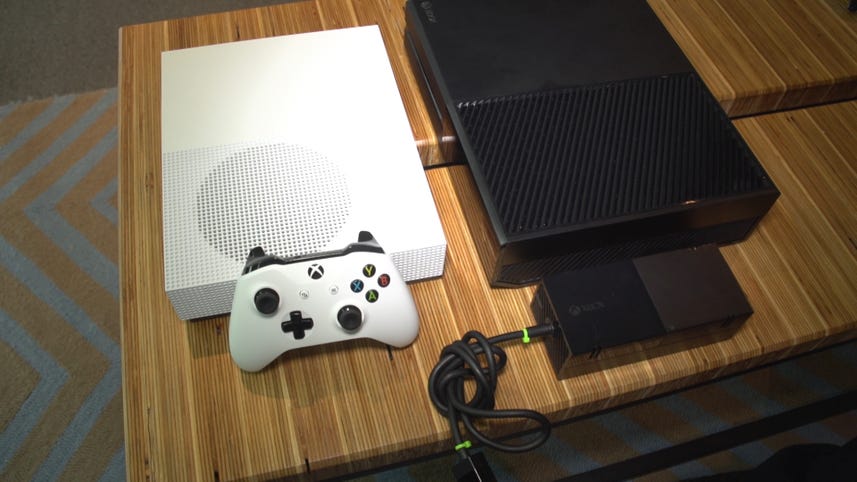 The Xbox One and One S side by side comparison
1:27
Watch Now

The new comes in at 40 percent smaller than the original One, which is a full-on beast of a box. That should put it much closer to the slim enclosure of the PlayStation 4 -- and free up quite a bit of space in your home entertainment center. It even includes a vertical stand in the box, if you'd prefer to mount it vertically.

The top-of-the-line Xbox will have 2TB of storage. That's double the capacity of the current top-end Xbox and PS4, and plenty of storage for all of your games.

The Xbox One S: A closer look (pictures)

Expect improved video on the Xbox , with support for 4K (3,820x2,160-pixel) resolution and high-dynamic range (HDR). (Just note that 4K support is reserved for video, not games.) That means -- on compatible titles and with compatible TVs -- you can expect colors to be more vibrant and blacks to be darker.

That 4K and HDR support isn't just for Netflix and Amazon streams: The Xbox will also play those new, top-of-the-line 4K Blu-ray discs, too. So it should be able to do everything that players such as the Samsung UBD-K8500 do for the same price or less -- in addition to playing great games.

Controls other devices via an IR blaster

Microsoft dumped the Kinect motion sensor from the Xbox One package long ago, which lowered the price by $150. The Kinect remains an optional add-on for the -- its absence of a dedicated port means you'll need a USB adapter -- but the new console includes a Kinect feature built-in: An IR blaster can control your TV and cable box like a universal remote.

The overhaul doesn't stop with the console, as the controller is getting a refresh, too. This variant of the wireless controller has a new textured grip and better range. Even better, it adds Bluetooth wireless, in addition to Xbox's proprietary wireless control scheme, which will allow you to use it with Bluetooth-ready PCs and tablets (and maybe phones?) without needing Microsoft's annoying USB dongle. Read our full hands-on: The new Xbox Wireless Controller offers more than just custom colors.

It still does (nearly) everything the old Xbox One does

With the exception of needing the adapter if you're adding a Kinect sensor, the still does everything the current Xbox One can, and plays all of the same games. It also includes all of the positive software improvements Microsoft has made over the past few years, including the redesigned interface, support for the Cortana digital assistant, compatibility with the Windows Store, backwards compatibility with a growing list of Xbox 360 games and more.

But before you preorder...

The Xbox is available for preorder at the Microsoft Store in the US, UK and Australia, but keep a couple of caveats in mind before you whip out your credit card. First off, Microsoft has already confirmed that a supercharged version of the Xbox One, dubbed Project Scorpio, will be hitting in late 2017 with support for gaming at 4K resolutions and VR add-ons. And Sony is also getting into the console upgrade game in the near future with its PS4 Neo, which will also amp up its 4K video chops.

And, of course, there's always Nintendo, which will be releasing its Nintendo NX console in March 2017.

So while the Xbox looks great, just know that a raft of other new and improved game consoles will be hot on its heels.