Microsoft's Surface line of laptops is bigger than ever, with four variations to choose from. These include the Surface Pro 7, the heart and soul of the family, as well as the brand new Surface Pro X. But it's the new, 13.5-inch clamshell Surface Laptop 3 that faces the most competition. The Dell XPS 13 has been refined to perfection, and HP stepped up its game this year with the Spectre x360. Then there's the MacBook Air, which relaunched last year and caters to the exact audience that Microsoft is after with the Laptop 3.

With all that heat from all these directions, Microsoft has done an admirable job with the 13.5-inch Surface Laptop 3. It nails almost everything you want in a mainstream, portable laptop. It's thin and light, has a fantastic trackpad and keyboard combo and, thanks to a processor upgrade, offers an notable power boost over 2018's Surface Laptop 2.

But certain drawbacks make it hard to give the Laptop 3 an unqualified recommendation over its competition. The biggest one is battery life. While far from awful, it's far below that of the MacBook Air and HP Spectre x360, as well as a step below last year's Windows Surface Laptop 2.

So it comes down to what you're after in a laptop. If battery life is your top priority, you're better off with one of the aforementioned long-lasters. If you don't need to have a marathon machine, the Surface Laptop 3 gives you a lot to love.

Watch this: Microsoft Surface Laptop 3 is still a delight
02:58 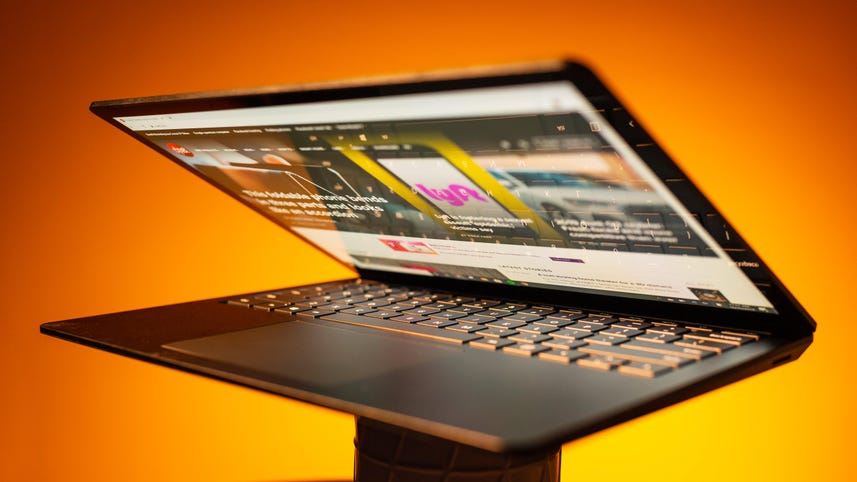 This is an incredibly well-designed laptop. The black aluminum version we tested is striking and, despite its susceptibility to thumb prints, never stops being satisfying to use. The Alcantara-fabric models for which the Surface Laptop line is synonymous are even more distinct. The 2,256-by-1,504-pixel, 3:2-aspect ratio touchscreen is the same first-class display as its predecessor. And, at 2.79 pounds (1.26 kilograms), it's an admirably light laptop.

The 13.5-inch Surface Laptop 3 technically starts at $999 (£999, AU$1,699). For that price you'll get a machine powered by a 10th-generation Ice Lake, quad-core Intel Core i5 CPU, 8GB of RAM and 128GB of storage. Here's one catch: In the US, this configuration is only available in the Platinum Alcantara variant.

This is a bummer. The platinum Alcantara model looks classy, but it's disappointing that you have to splash out so much extra if you want the Laptop 3 in any other color. The black variant is, as noted, gorgeous. Paying premium for a metal finish is fair, but there's no reason for there not to be a cheaper black, gold or blue Surface Laptop 3 with 128GB storage -- as is the case with the $1,099 (£1,299, AU$1,699) MacBook Air model.

Obviously, what model of laptop you go for depends on what your storage needs are. Personally, thanks to various streaming services and Google Drive, I store next to nothing on my computers. For someone like me, such a well-designed and respectably powered machine is a steal at $999 -- but I also have the luxury of not needing more than 8GB RAM for my job-related applications. Still, $1,299 for what's on offer is a perfectly good deal.

And hey, who ever said beauty was cheap?

Much of what's notable about the Laptop 3 was present in last year's Laptop 2. What's new this year? A few improvements, and one drawback.

First, the bump up to Intel's 10th-gen processor is significant. Microsoft claims the 13.5-inch Surface Laptop 3 is three times more powerful than the 2019 MacBook Air; that's not difficult given how underpowered the Air is, with its old dual-core processor compared to the quad-core in the Laptop 3. More important, our benchmarking showed dramatic improvement over last year's Laptop 2.

Anecdotally, the Laptop 3 always felt spry and zippy. I also tested the laptop's gaming performance, since Intel's new Iris graphics are claimed to be an improvement over previous integrated graphics. They generally fall into the same class as Nvidia MX150/MX250 graphics. Don't expect to play any blockbuster games on here, but I was able to play Overwatch on medium graphics settings at 1080p with only occasional dips below 30 frames per second. That means this'll be a good machine for World of Warcraft, Counter Strike and similarly well-optimized games.

You might be able to get away with Photoshop on the base-level 13.5-inch Laptop 3, and light video editing on the i7 version. But there's no dedicated graphics card on either model, so creatives looking for a machine on which to do the bulk of their video editing are best opting for something with more power.

That's to be expected, though. For a thin-and-light laptop, the power on offer here is above average. But it comes at a cost. As noted, the Surface Laptop 3 is significantly more powerful than the identically-priced MacBook Air and a good deal more so than last year's model. But battery life is the sacrifice.

In my looped video-stream test, I got far more battery life out of the MacBook Air: 13 hours and 27 minutes for the Air versus just over 8 hours for the Laptop 3. Once again, given the Air's ultralow-power Y series processor, that's unsurprising. Disappointingly, the Laptop 3's battery life was shorter than the Surface 2's and is slightly shorter than the Dell XPS 13's.

Using the laptop in my daily life, I got between 5 and 6 hours of use out of it before it needed a recharge. Which isn't bad, just OK. Keep in mind, I'm using the i5-version. The i7 may deliver different results.

One last note on battery is a new fast-charge capability. Microsoft says you can go from 0 to 80% in an hour: I got 74%, which I'll call close enough.

The next big improvement is ports. One of our few issues with last year's machine was the lack of a USB-C port. Microsoft has wisely ditched the Mini DisplayPort connection and replaced it instead with USB-C port, which complements the USB-A port. It does mean you'll need a dongle to connect to an external display via HDMI over the USB-C connection if your monitor doesn't have a Thunderbolt or USB-C alt-mode connection, which still isn't very common. There's also the 3.5mm headphone jack and Microsoft's proprietary charger. However, the USB-C port does not support Thunderbolt speeds, which means it won't work with certain external GPUs.

I have a confession: I'm one of those freaks who actually loves the shallow keyboards on Apple's new MacBook Air and Pro laptops -- but I prefer the Surface Laptop 3's keys even over those.

With some more juice, the Surface Laptop 3 would be hard to beat in this ultracompetitive category. As it is, though, the strong trackpad/keyboard combo, improved performance and snazzy (though little changed) design make the Laptop 3 worth the price tag.