Microsoft Surface Go review: This shrunken-down Surface is fun and practical, but more expensive than it looks

The Surface Go from Microsoft is fun and practical, but not as inexpensive as you might think.

The small-scale Surface Go from Microsoft recasts the larger Surface Pro two-in-one as a casual computer you can toss in a bag and take anywhere. But, the change in size, price and processing power presents a lot of questions for would-be buyers. To answer the most pressing ones:

The Surface Go delivers Microsoft's great Surface design and accessories at a lower price and in a smaller size.

The Pentium processor isn't suited for all tasks. A keyboard cover is a must-have add-on but still sold separately. And you'll probably want to pay extra for more storage and RAM, too. Battery life is lacking for a go-anywhere PC.

The new Microsoft Surface Go is the perfect size for casual coffee-shop computing, but getting the full experience quickly drives up the price.

Yes, the new Surface Go can still run many everyday PC tasks, even with only an Intel Pentium processor. No, it's not likely going to satisfy as your all-day, everyday workhorse computer, both because of the limited horsepower and the small size. Yes, it's significantly less expensive than the bigger Surface Pro, and closer in price to an iPad. No, it's not going to save you much at the end of the day, as the must-have keyboard cover and other accessories are still sold separately (and priced on the high side).

Editor's note: This review has been updated with new benchmark results and a final rating.

But despite not being the bargain Surface you might have been hoping for, it's hard not to like this little two-in-one Windows hybrid. The smaller size works surprisingly well, both for the 10-inch, 1,800x1,200-pixel display and the clip-on keyboard, which manages to shrink down individual keys without overly compromising the overall typing experience. 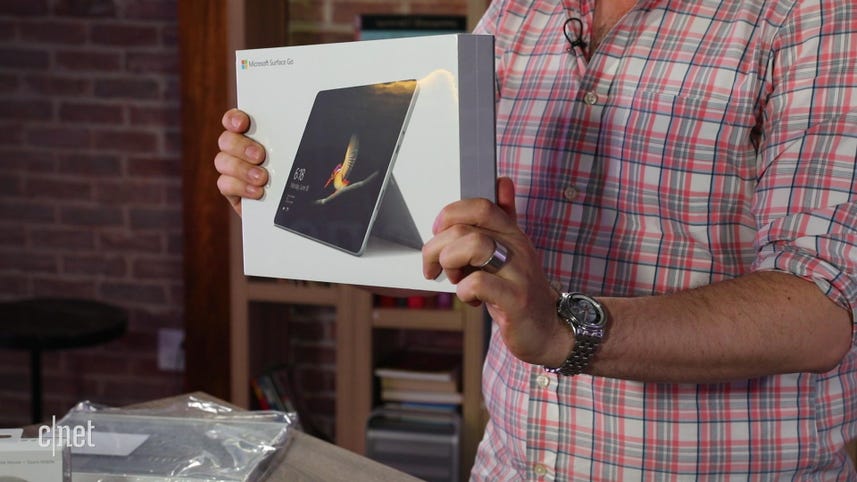 It helps that the touchpad built into the keyboard cover is huge for such a small device. And that familiar touchpad and cursor interface works seamlessly with -- or instead of -- the touchscreen, giving you exactly the sort of flexibility lacking in the iPad or other non-Windows tablets. For example, I was recently able to take the Surface Go to a press event and use it as my main on-site PC, with its small size and light weight as major plusses. I was slightly concerned about battery life, being as I'd be using the Surface Go for several hours of intensive writing, emailing, social media posting and live-chatting through Slack, but it held up just fine, and I didn't feel like I was missing much by leaving my full-size laptop at home.

The biggest question about the Surface Go was how it would perform as a Windows 10 machine. That's because it swaps the usual Core i-series Intel CPUs for lower-end Pentium processors, which are typically only found in laptops at the budget end of the spectrum (it's a favorite for Black Friday doorbusters, for example).

It's a definite step down in processing power, but the potential silver lining is that for most of what people do on their PCs today -- websurfing, media playback, and using online tools and services -- there's not too much of an experiential difference. At least if you don't run too many apps at once or keep 20 browser tabs open.

That may be one of the reasons behind shipping the device with Windows 10 S, the Windows variant that restricts you to apps from the official Microsoft app store, supposedly all in the name of security. It's always been a bit of a head-scratcher as an OS, but fortunately it's easy and painless to switch to regular full-blown Windows 10 at no extra cost. It just takes a few button-clicks and then you can install the Chrome browser, the Windows Amazon Kindle app, or anything else, providing it can run on a Pentium CPU. I can't imagine any Surface Go purchaser not doing that immediately.

If the idea of a smaller, less expensive, low-power Surface sounds oddly familiar, that's because it's been tried before. The closest comparison is the single-name Surface 3 (as in the non-Pro version), which was a 10-inch variant released in 2015 with an Intel Atom processor. At the time, I referred to it as "trickle-down computing," and said it wasn't powerful enough to be your full-time computer.

While the hardware specs may not wow you on the page, in real-world situations I found the Surface Go to be filled with pint-size charm. During my frequent NYC coffee-shop writing sojourns, it turned out to be the perfect size for on-the-go use, with the keyboard just big enough and the system powerful enough to run Google Docs and the other online tools I use regularly.

Much about the Surface Go feels like it hits a sweet spot between design and functionality. The best parts of the Surface experience -- the excellent kickstand, the best-in-class keyboard cover, the great stylus support -- are all here, just in slightly miniaturized form. It also takes a step into the future (some would say present) by adding a USB-C port. Power can be connected via your own USB-C power source or with the included magnetic Surface-style power connector.

But two of the biggest Surface issues remain unsolved. The bezel around the screen is shockingly thick, especially notable now that other PC makers are embracing the slim-bezel look. And more importantly, for a laptop alternative, the slate-plus-keyboard-plus- kickstand design still isn't especially lap-friendly.

If there's one thing that rubs me the wrong way about the Surface Go, it's this: While Microsoft has crafted a perfectly scaled version of its excellent keyboard cover, which I've always considered the most impressive part of the entire Surface ecosystem, it's somehow still not included in the purchase price. Like the keyboard covers for the larger Surface Pro models, you have to buy it separately, starting at $99 (£100 or AU$200) for plain black or $129 for the color versions.

The Surface Pen stylus is also $99 (£99 or AU$139), and it's the same exact one as you'd use on the Surface Pro. If you have an existing Pen from an older Surface, just pair it with Bluetooth and it's good to go. Like other Surface systems, there's a built-in magnetic connection that can affix the stylus to the side of the system.

The new smaller Surface takes the laptop-like Pro and shrinks it down to roughly an iPad's size. Running full Windows 10 (after the free upgrade from Windows 10 S) and an Intel CPU, even if a low-end one, this at least makes more sense than the much-derided original Surface RT, which used an ARM CPU and the limited and now largely forgotten Windows RT operating system.

If you're the type of user who would get everything you need from a Chromebook or a low-end Windows laptop, such as the similar Lenovo Flex 11, this is a modest extra investment to get a great high-end design, the flexibility of a two-in-one hybrid and access to a useful ecosystem of accessories.

In our benchmark testing, this system hits middle ground in budget PCs -- a bit faster than comparable budget Pentium laptops, but not as fast as a basic Intel Core i3 laptop. Battery life in our streaming video test was about 6.5 hours, which is on the low side for an ultraportable device. Something like the Asus NovaGo, which pairs a mobile phone CPU with a 2-in-1 Windows design, ran for more than double that.

As much as I liked the Surface Go, the fact that the must-have keyboard adds a 25-percent premium (or more) to the price still burns me. The battery life is also a potential deal-breaker for all-day use. But otherwise, for a low-power PC to toss in your bag for entertainment, social media or light work, if they threw in the keyboard cover with the system at the base price, I'd be all in.

Which Microsoft Surface should I buy?: There's a full line to meet any demand. Here's how to pick the right one.

Best of AmazonBasics PC accessories: From a cheap mouse to a budget gaming keyboard.

Great games for your nongaming laptop: No GPU? No problem.