You'll absolutely love swinging around Manhattan and fighting as the webslinger, but Spider-Man's gameplay and story are a bit one-dimensional.

There's a lot to love in Insomniac Games' Spider-Man, which arrives on PS4 this Friday. Swinging around a remarkably rendered New York City is exactly as much fun as you could ever wish. The combat is fluid, varied and lets you lean into whichever fighting style suits you best. Stylistically, Spider-Man nails all the web-slinging details, from the impressive roster of unlockable suits to the friendly neighborhood persona that Peter Parker is known for.

Spider-Man features an astonishing recreation of New York City, including most of its districts and landmarks. Swinging and fighting is super satisfying and doesn't get old. It's a love letter to Spider-Man fans.

The gameplay suffers from a limited amount of variation. A lot of the missions play the same and rarely does it go beyond a few types of mechanics. Some of the writing falls short and the overall story isn't compelling.

It's insanely fun to swing around Manhattan and fight as Spider-Man, but the game's depth may come up short for players who are looking for more than just fan service.

Spider-Man's production values are spectacular overall. It's a gorgeous-looking title whether you're using a PS4 Pro or standard. You can swing across Manhattan without having to wait for anything to load. And all the major NYC landmarks are represented and accounted for -- so much so that natives will have an even easier time getting around.

This is the best that playing Spider-Man has ever felt to me. His specific move set has been emulated in a way that captures every iconic acrobatic lunge and stance. If Spider-Man is your thing, this game will play like a love letter to everything that embodies the hero's aesthetic.

And I presume that for many players and Spider-Man fans, this attention to detail may be worth the price of admission. But for all the things Spider-Man does really well, there are also some blemishes along the way. If you've played a lot of open-world tower unlocking games, that rinse-and-repeat gameplay loop is the standard fare almost throughout the campaign. Almost like an old cliché, the game's map is riddled with icons in a way you've probably seen before. But not every side objective is bursting with fun -- in fact, some of them are downright unpleasant.

The problem is that there aren't that many different gameplay experiences to have. A lot of the missions and goals in Spider-Man don't deviate significantly from a number of core mechanics. A sizeable portion of the game consists of clearing out areas of enemies, web-slinging chase-downs or circuitry puzzles that have you mixing and matching tiles to get electricity to flow correctly. There are occasional detours in light stealth and pattern-matching, but none of them leave you wanting more.

Watch this: The new Spider-Man game is the one we've been waiting for
02:40 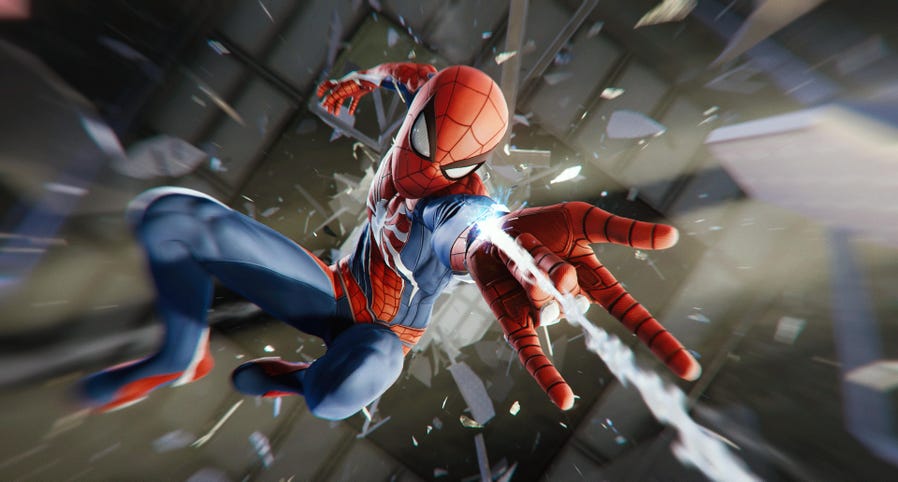 The new Spider-Man game is the one we've been waiting for
2:40
Watch Now

Take Harry Osborn's environmentally conscious side quests for example. Most of these tasks require you to do things like swing through clouds of pollution, release clogged steam pipes or trace the city's plumbing system to find the source of a contamination. Then there's a side mission where you literally chase down pigeons. Sure, every open-world game has collection filler, but the uninspired variety here outstays its welcome.

Spider-Man must complete these non-story missions to earn tokens that are required to unlock suits (along with powers and mods), gadgets and other upgrades. Every time Spidey completes an XP level he earns a skill point that can be spent within three different disciplines. So the incentive to complete some of the side quests is there, but it's shame that they aren't so great -- and it can make completing them feel like a drag.

If there's any saving grace when it comes to the game's underwhelming side quests, it's that they change throughout the game. New markers will open up on the map as you progress through the story so you'll still have a need to visit districts you've already cleared. It's worth mentioning that these new items aren't drastically different from previous quests, but at the very least they provide a change in scenery.

Thankfully, the combat in the game is loads of fun -- because there's a lot of it. Spider-Man has a solid range of maneuvers and upgradable abilities that let you combine gadgetry, special suit-specific mods and other environmental elements into what feels like an endless of amount of melee combinations. There's also a really cool spidey-sense dodge technique that will temporarily slow the action down if you nail the timing.

It's impossible to play Spider-Man and not be reminded of Rocksteady Studios' Batman games. In fact, it made me wonder just how similar the two heroes are in their own right, especially when you consider their gameplay repertoires. Suffice it to say, Insomniac's version of Spider-Man takes cues from the recent Batman games in more ways than one. If you've played any of that developer's trilogy, you'll quickly feel right at home.

Spider-Man's story swings between highs and lows, just like its gameplay. The main narrative tries to throw a few curve balls that you know are coming, but it also introduces some interesting ideas such as a constantly updating Twitter-esque timeline that you can access from the map screen. Then there's J. Jonah Jameson's radio show where he essentially shouts like a belligerent Alex Jones-inspired character over the airwaves, trying to convince the public that Spider-Man is actually an enemy of the people.

There's great acting and performances throughout, but the some aspects of the story and its antagonists have a cookie-cutter feel to them. There's genuinely compelling dialogue mixed in a number of scenes too, but sometimes the writing feels shallow. All in all it's a mixed bag.

Spider-Man's unevenness is evident throughout the game. Only a handful of missions feature stand-out action sequences (they really start to pick up about 70 percent through the game), and even those rerun the same quick-time-event prompts from earlier engagements. At times you'll likely find yourself more engaged with the cutscene than the actual gameplay. The combat and webslinging are undoubtedly the stars of the game, though an occasional close-quarters camera issue can ruin a sequence.

Insomniac Games has laid an excellent foundation for more Spider-Man games down the road. This first entry demonstrates that the veteran studio can tackle Spidey's combat in a compelling way and create some genuinely astonishing action sequences with top-tier visuals to match. I'll be looking for more gameplay depth and variation to round out the entire experience next time and more motivation to see Spider-Man's next chapter all the way through.

By no means is Spider-Man dead on arrival, it just leaves some room for improvement. This feels like a game that will have a great sequel.

Make sure to check out GameSpot and Giant Bomb's coverage of Spider-Man.