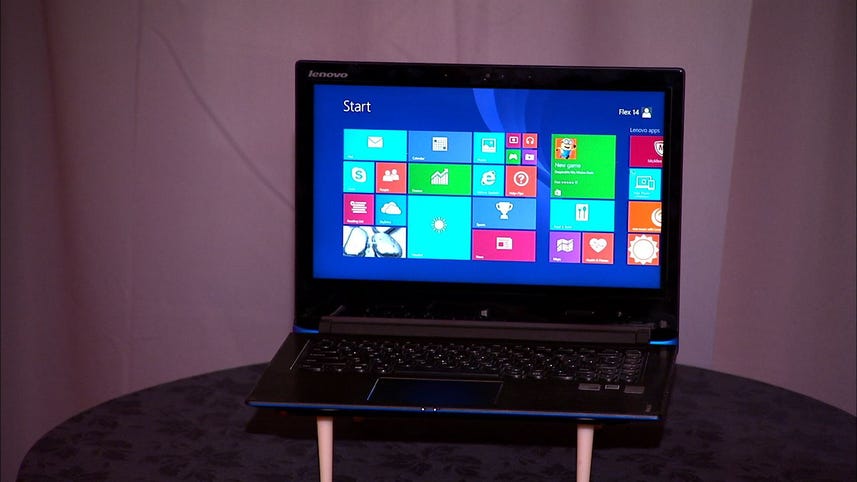 Lenovo's Flex line of laptops, first launched in the second half of 2013, always felt like a bit of an odd man out. It offered some of the screen-bending abilities of the Yoga line, but its screen only bent part of the way back, leaving you with a table tent (or kiosk) shape, rather than a tablet. At least it was less expensive, because it certainly felt like a lower-end product.

Of the 2013 Flex 14, we said: "The fold-back hinge is of dubious practical use, as it doesn't fold all the way down into a tablet, but if you pick the right configuration, this is still a good, inexpensive Core i5 laptop, even without the gimmicks."

The revamped versions introduced at CES, the Flex 14D and Flex 15D, don't do much to change the basic features of the original Flex, but instead try to win on price. By switching to AMD processors and Radeon graphics, Lenovo hopes to make these a more compelling option for those who like a quasi-hybrid, but can't afford the more expensive Yoga products.

With AMD A6 processors, and the AMD Radeon graphics that platform includes, you're looking at a starting price of $499 for the new Flex "D" models, which should be available imminently. Complicating matters somewhat is the new Yoga 2 line, which unlike the Yoga 2 Pro, offers lower starting prices and more flexible configurations that can trade down to cost-effective Intel Pentium CPUs and platter hard drives.