The 11.6-inch convertible is a sturdy, low-cost option for a student Chromebook.

Alexandra is an associate editor on CNET's Performance Optimization team. She graduated from Marymount Manhattan College in New York City, and interned with CNET's Tech and News teams while in school. Prior to joining CNET full time, Alexandra was a breaking news fellow at Newsweek, where she covered current events and politics.

With dozens of Chromebooks available, the Lenovo Chromebook C340-11 still stands out by packing in all the basics a student could need at for an affordable price. Ringing in at a little over $300, the 11.6-inch two-in-one is equipped with a budget Intel chip, the Gemini Lake Celeron N4000, which is enough for average school work. You get a bunch of necessary ports, too, all bundled into a portable lightweight package.

Lenovo built this Chromebook with a metal lid and plastic body, but the material mix isn't off-putting and the C340-11's construction feels solid and durable. The metal-and-plastic pairing also doesn't affect the overall aesthetic since the colors match up pretty well and the metal lid makes the Chromebook feel more premium. 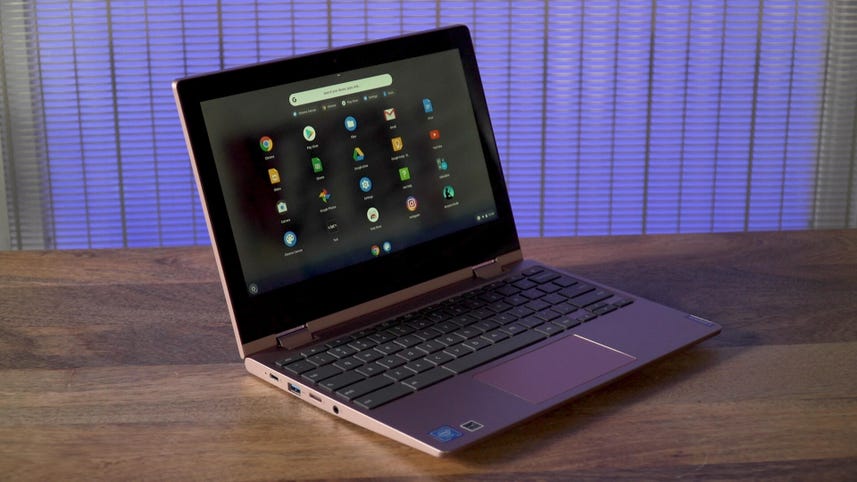 The keyboard deck may be plastic, but it's solid and doesn't bend when you type. The keys themselves have a mushy feel and occasionally let out random clicks as if crumbs are stuck underneath the keys, but overall the keyboard is decent considering its low price.

The C340-11's 11.6-inch display has a glossy IPS touchscreen with a 1,366x768-pixel resolution. It's fairly bright and sharp when used indoors away from any sunny windows. The touchscreen is precise and responsive, but I'd appreciate a stylus for note-taking, drawing or simply for avoiding pesky fingerprint smudges.

The display's oddly large bottom bezel eats up a lot of vertical real estate and makes the display feel smaller. Convertible two-in-ones arguably need to leave some room to grip when you use them as a tablet, but Lenovo may have taken it too far with the C340's crazy-thick chin, which is nearly double the width of the other three.

Lenovo didn't skimp on ports for the C340 with two USB-C and USB-A ports -- one of each on both sides of the Chromebook -- along with a headphone jack and microSD card reader on the left. The C340 is charged via USB-C, so no matter the set up, plugging in the Chromebook is easy to do without cord twists and tangles. Lenovo says the Chromebook's battery will run up to 10 hours, but we hit more than 12 hours on our streaming video test. Regardless, it should give you more than enough battery to survive the school or work day.

The Chromebook's two sturdy 360-degree hinges allow the lid to swing into a wide range of positions without the worry of the two-in-one falling over or collapsing on itself. The display does slightly wobble when using the touchscreen in a traditional laptop position, but not enough to stress-out about the overall stability. One of my favorite setups is folding it into a tent. This A-shaped arrangement opens up plenty of desk space to do homework and take handwritten notes from a PowerPoint or an online textbook. It's also a great way to watch Disney Plus and Netflix.

The downside to using this Chromebook for entertainment is its speakers. The two-in-one's stereo pair are quiet and even at 75% volume the sound comes out as a whisper. When played at full volume, the speakers distort audio with crackling mids and highs and a nearly nonexistent bass. Take advantage of the headphone jack and Bluetooth connectivity when you can -- it's the better choice.