The Hydro XTRM from U.S. Cellular hits stores on May 24, but users can order the tough Android 4.1 handset online today. 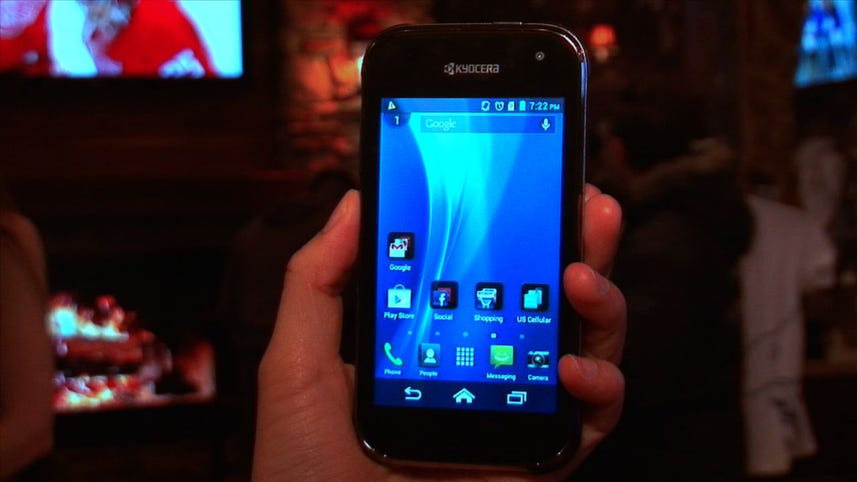 Unlike its Edge sibling, which is only waterproof and operates on 3G networks, the XTRM (pronounced "extreme") is both waterproof and shockproof, and runs on U.S. Cellular's 4G LTE data speeds.

You can order the XTRM online today for $29.99 after sending in a mail-in rebate and signing a two-year carrier agreement. Retail stores will begin selling the device starting May 24.

Design
Because the XTRM fulfills certain military spec standards for shockproof capabilities, it has a slightly bulkier build than the Edge. I liked its chrome metal edging that encircles the body, and while the battery door's pimpled battery door isn't too attractive, the rubber exterior provides more friction and helps with grip.

The device measures 4.88 inches tall, 2.52 inches wide, and 0.42 inches thick. It weighs 4.9 ounces, and the heftiness was apparent when I held it in my hand. However, after a short while, I stopped noticing its heaviness.

Located on the left edge is a volume rocker. The top edge features a sleep/power button and a 3.5mm headphone jack, and the bottom edge houses a Micro-USB port for charging.

Like the Edge, the handset sports a 4-inch IPS WVGA display with a 800x480-pixel resolution. Again, this isn't 1080p HD territory, but I was still be able to view images and read text just fine.

On the back you'll find the camera and accompanying LED flash below it. Two small slits for the audio speaker sit to the left of the lens. Using a small indentation on the left of the back plate, you can pry the battery door open, but it will take some muscle to both remove and reapply the plate again.

+4 more
See all photos
Features
The XTRM operates on the Android 4.1 Jelly Bean OS. You can also expect the handful of Google staples such as Chrome, Maps with Navigation, and YouTube.

Given that the phone belongs to Kyocera's line of waterproof Hydro handsets, the XTRM can be underwater at a meter's depth, for up to 30 minutes. However, it's also shockproof, and it can be reportedly dropped 26 times from a height of 4 feet.

During my short time with it, I wasn't able to conduct any drop tests. It did feel sturdy, however, and given that last factoid, I'm that much more excited to review it. I just want to know what'll happen on the 27th drop.

Similar to the Edge and Torque, this phone also features Smart Sonic Receiver technology. This means that in lieu of an in-ear speaker above the display, the device uses its ceramic transducer inside to transmit audio via the hard tissue inside your ear. This, in effect, boosts audio clarity and quality.

Powering the device is a dual-core Snapdragon 1.2GHz processor, and a 2,000mAh battery, which has a reported talk time of 12.4 hours. Users will also get a 5-megapixel rear-facing camera, along with a 1.3-megapixel front-facing camera for video chatting and vanity shots.

Additional features include 1GB of RAM, 4GB of ROM, a storage capacity expandable to 32GB.

Outlook
For U.S. Cellular customers, the XTRM is a good addition to the carrier's lineup. Not only is it 4G LTE enabled, it's also being sold at a reasonable $30 price mark. In comparison, the Motorla Defy XT, another shockproof and waterproof handset from the carrier, only runs on 3G and is more expensive.

Although I'll hold judgment until I spend more time with it, the XTRM has a lot of potential as a midtier device that, while not extremely rugged, stands to be more resilient than the average smartphone.

Check back with CNET for all the news unfolding from this week's CTIA 2013 show.