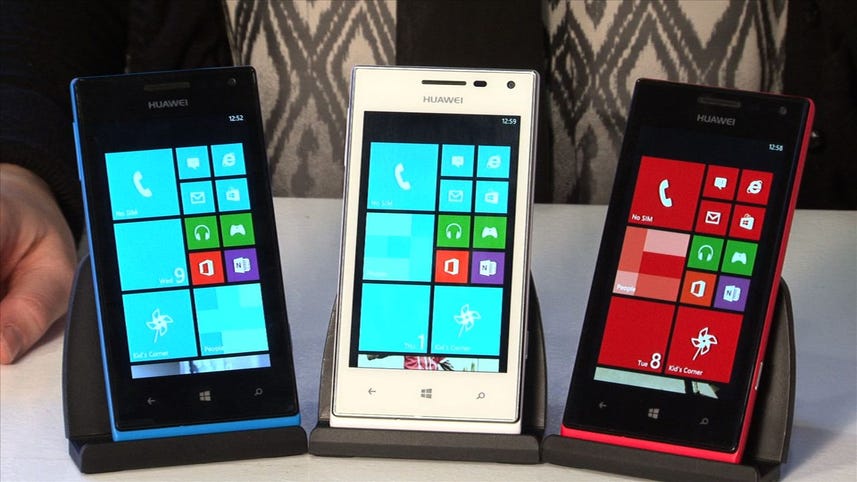 LAS VEGAS--Coming in big with two extra-large Android smartphones wasn't enough of a splash for Huawei here at CES. This morning, the Chinese networking provider and handset-maker launched the Huawei Ascend W1, its first-ever Windows 8 phone.

The first thing that struck me, both when I first saw the press images and when I finally got three of the models in my hands, is how similar to W1 looks to Nokia's Lumia 900 and 920.

There's the same block shape with squared-off corners and a glossy display set onto bright colors. In fact, Huawei's W1 (as it's known in the U.S.) will come in four hues that are almost identical to Lumia colors: a cyan blue, bright red, white, and black.

Let's hope that Nokia believes the old adage that imitation is the highest form of flattery, because both Huawei and HTC appear to follow its lead in Windows Phone handset design.

I like the high-end Lumias and love the HTC Windows Phone 8X design, so I was drawn in by Huawei's pop-of-color trend, too.

But this is where the similarities level off because the Ascend W1 has a smaller 4-inch LCD screen and not a lot of enhancements. The screen resolution, by the way, is 800x480 pixels. The handset comes in medium thickness, a hair under 0.4 inch thick.

The W1's processor is a 1.2 GHz dual-core Qualcomm Snapdragon S4 MSM8230 chipset, with the Adreno 305 GPU. Most of the new Windows phones use the slightly faster 1.5 GHz Qualcomm processor, but this spec shouldn't slow users down too much, especially if they're accustomed to using a single-core phone.

A 1,950mAh battery gives the Ascend W1 up to 19.6 days of standby time; Huawei claims this is the longest on the market for this type of phone.

While there's no pricing or information just yet, we do know that the Ascend W1 will launch first in China and Russia in January, with Europe, the Middle East, and U.S. markets to follow. The U.S. version will launch exclusively with Wal-Mart in May.