From an fanless 11-inch hybrid to a budget 17-inch laptop, HP offers a wide variety of processors, screen types and colors.

The new back-to-school laptops and hybrids from HP emphasis flexibility, and offer a wide array of options for components, features, and even colors. Nearly all the products announced on April 22 are available with Intel or AMD processors, and with HD (1,366x768) or Full HD (1,920x1,080) displays, in touch or non-touch versions, and many start right around $500, which will be good news for back-to-school shoppers.

The Pavilion x360 line of fold-back hybrids has been updated with new 11-inch and 13-inch models. Of those, the 11-inch is the more interesting, as it moves up to Intel's new Core M processors, the much-talked-about chip that powers Apple's 12-inch MacBook, among other laptops and hybrids. Older Celeron and Pentium chips are also available.

The 11-inch Pavilion x360 has a fanless design, a key feature in many Core M systems, and will come in several colors, including silver, red, purple and green. The display, while a touch screen, is a lower-resolution 1,366x768 panel, and the memory can go up to 8GB of RAM and a 128GB SSD.

Like other fold-back hybrids, the screen doesn't detach, but instead folds back 360 degrees, allowing you to fold the chassis into a kiosk or tablet form, but without compromising the basic clamshell shape.

The larger 13-inch Pavilion x360 uses new fifth-generation Intel Core i3 and i5 processors, has an optional 1,920x1,080 display, and can support up to 16GB of RAM, but it'll only be available in silver and red.

A higher-end hybrid is the new 2015 version of the HP Envy x360. With a larger 15.6-inch display, its screen also folds back 360 degrees, but this will be available with either an HD or Full HD IPS display, so it looks good even from very wide viewing angles. Sadly, only silver brushed metal here, no fun color options.

The Envy x360 supports fifth-gen Intel Core i5 and Core i7 processors, and even midrange discrete graphics from Nvidia. Storage can go up to a 1TB HDD or 256GB SSD. 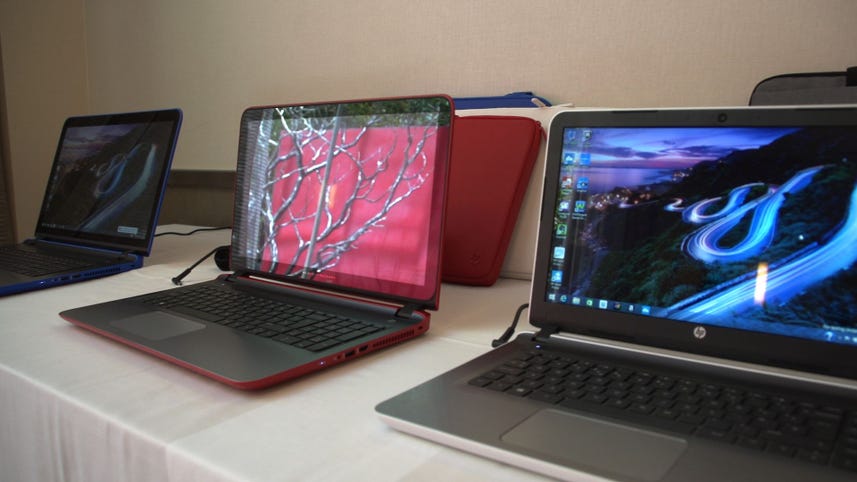 Laptops that bring back the optical drive

The first thing that stands out about the 2015 version of HP's Pavilion laptops is that all three models, 14-, 15- and 17-inch, include a feature that's becoming increasingly hard to find -- an integrated optical drive.

These mostly plastic laptops also offer an impressive array of configuration options. Each screen size can be ordered with either 1,366x768- or 1,920x1,080-pixel screen resolution, in either touch or non-touch versions. Further, a wide variety of CPUs are available, including new AMD A-series and fifth-gen Intel Core i3/i5/i7 chips. Some configurations will also be available with discrete graphics options, although we're not clear on exactly what GPU hardware will be offered.

Out with Beats, in with B&O

All of the new laptops and hybrids from HP feature Bang & Olufsen Play, an audio software app that tunes the sound of the laptops for a better listening experience. B&O listens to the audio from each product line, and each size within those product lines, and tweaks the EQ and audio presets built into each model.

In person, during a directed demo session, a sample music track certainly sounded better with the B&O Play software enabled, but keep in mind, the audio company is only providing software that works with HP's existing speakers (much as Beats Audio did in previous years), not designing or building the actual speakers.

The new Pavilion laptops will be available in the US from May 13 on HP.com, and from retailers on June 21, starting at $479.

HP has yet to provide international price and availability dates for these systems, but we'll update this story when that information is available.