The 17-inch HP Omen hits the sweet spot. There are laptops with greater graphical grunt, but they're mostly either heavier or more expensive. There are thinner, lighter laptops, but they're mostly either less powerful or, yet again, more expensive. The HP Omen succeeds because it crams impressive power into a relatively light machine for a cost that's a bit lower than most of its competitors.

The HP Omen 17 comes in a wide range of configurations, most of which offer good graphical bang for your buck.

The 4K variant has poor battery life, no option for a Nvidia GeForce 1080 GPU.

It's not the most powerful gaming laptop out there, nor the slimmest one, but it's among the best combinations of price, screen size and performance.

Unlike its 15-inch little brother, the 17-inch HP Omen can be configured with an Nvidia GeForce 1070 graphics card. A GeForce 1050 will play the games of today, a 1060 will let you dabble in VR. The powerful 1070, though, is a better bet for the games of tomorrow -- and the two or so years that follow tomorrow. There's another step beyond that, the Nvidia 1080, but that's where prices really start to go up.

That, plus a 7th-generation Intel i7 processor, comes in a machine that weighs 6.3 pounds (2.8kg). Not light, but on the lighter side for a 17-inch laptop. Many of its peers weigh in excess of 7 or 8 pounds, with some beasts like the EVGA SC17 in double-digit territory.

The laptop will handle everything you can throw at it -- if you keep games to 1,920x1,080-pixel, full-HD resolution. I played a few hours of Rise of the Tomb Raider, released in 2016 but still among the most graphically demanding games out there, and it ran perfectly smoothly in FHD. Kicking the resolution to full 4K caused some choppiness, but the game still mostly ran at around 30fps.

One problem with gaming laptops is the inability to switch graphics cards in and out, so whatever card you have, you're stuck with it. You'll be able to play most of today's games with ease on the Omen 17 configured with a GeForce 1050Ti, and play all of them with ease with a 1060. If you want future-proofing though, it's worth shelling out an extra hundred or so for the 1070.

Portability is clearly not your main concern if you're in the market for a 17-inch machine, but the HP Omen is admirably trim considering the necessarily large frame. At 6.3 pounds, it's not something you'd take to work every day -- or anywhere near public transport. But it's something you can move around the house or (drive) to a friend's house every now and then without it being a major hassle.

That's not always the case: Some out-there laptops like the MSI GT83VR weigh 13 pounds and even a 17-inch Alienware weighs almost 10 pounds.

It also finds a nice balance between last year's subtle (boring) look and the extravagant (obnoxious) design of many gaming laptops. It's got a two-tone back, accented by carbon fiber and the HP's blood-red omen logo. That same blood red drips from the keyboard, as you'll get keys backlit with red to remind you you're using a gaming laptop. Razer still wins the backlit-keyboard wars, but it's a cool look. 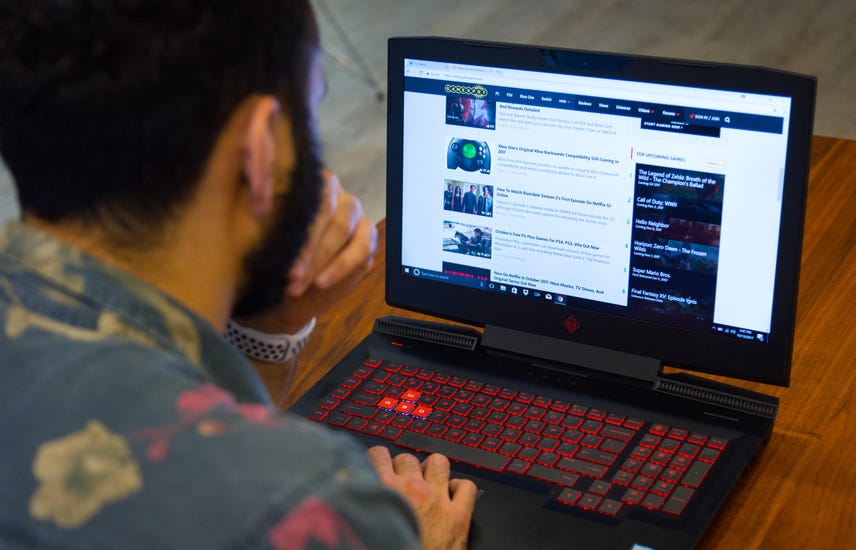 The Omen avoids many of the design concessions that other machines are forced to make. Its touchpad could be bigger, but it's where you'd expect it to be. Laptops like the powerful Asus Zephyrus, meanwhile, push the touchpad next to the keyboard. The keyboard on the Omen takes up a normal amount of the laptop, and there's no conspicuous empty space like you'll find on the Acer Predator Triton or the famously stylish Razer Blade Pro.

Give a little, get a little

There's a lot to like about the Omen, but as is always the case with laptops, and particularly gaming laptops, there are trade-offs.

The laptop's beautiful 4K screen is terrific for Netflix and some UHD gaming, plus it being an IPS display means no finicky viewing angles. The problem? You won't be able to enjoy the view for long. The Omen lasted just over 3 hours in our video tests, which is below average even for a gaming laptop. We've found 4K displays are big battery killers across different laptop brands.

While the Omen 17 is a good deal, it's not the go-to choice if you've got a big budget for gaming. The Razer Blade Pro crams an Nvidia GeForce 1080 into a slimmer frame, though it'll cost you $3,700. If you're all about raw power and also an eccentric millionaire, perhaps you can consider MSI's $4,800, dual-1080-wielding GT83VR. If you've got some extra cash, you'll also be able to buy a 1070-powered 15-inch laptop, like the Alienware R3. The 15-inch HP Omen, which can be configured with a 1060 GPU, is also not bad.

But if you're looking at getting a powerful gaming laptop and don't mind lugging around a 17-inch monster, there are few monsters out there that mix brawn, beauty and affordability like the Omen.