The people behind Guitar Hero are back, and their new creation, this time more of a DJ sim, is a mess. But it's a fun mess.

Have you ever wondered what it would sound like if Sia, Imagine Dragons, The Weeknd and Disturbed all got together and made a club banger?
Well, friends, wonder no more.

DropMix, somewhere between game, music maker and toy, is a collaboration between Harmonix, of Guitar Hero and Rock Band fame, and Hasbro. You get a board that's about 23-inches long (0.6 metres), which has five card slots. You also get a deck of cards, with each one representing an element of a song, say, the vocals from Childish Gambino's "Heartbeat" or the bass line from Cake's "Short Skirt, Long Jacket," which you place on the aforementioned slots. Using some kind of black magic, DropMix takes all those elements and makes one song out of it.

There are some limitations, but the technology here is absurd -- and I mean that in the best way possible.

You'll start off in Freestyle mode, where the mechanics are intuitive. Each song element is represented by one colour, either yellow, red, blue or green. The five slots on the board all have one or two of those colours, so you simply place a card onto a correspondingly coloured slot. Then, the magic happens.

It won't be long before you've concocted a freaky mix that combines the likes of Skrillex, Bruno Mars, Salt-N-Pepa, Ed Sheeran, Jason Derulo, The Chainsmokers and more. This sounds like chaos on paper, and it is, but Dropmix somehow finds a way to make beauty of that chaos. Or, at least, a fun beat.

If you don't like what you're hearing, you can hit the big DropMix button at the base of the board and the software will do one of those "drop the beat" things that DJs do at electric boogaloos, and the song will start again with a totally different tempo, in a different key and highlighting different song elements. It's impressive how the same five cards can sound like so many different songs.

To get some competition going, there are also two game modes, Clash and Party, which you can play through a phone or tablet. Clash, playable with up to four people, was my favourite of the two. It's a competitive card game, where you use different card powers to own more of the board than your foe. Party, meanwhile, simulates a DJ set, where you work together with friends to meet musical requests from the crowd.  Both games produce ridiculous background music.

Watch this: DropMix is weird and very wild
02:11 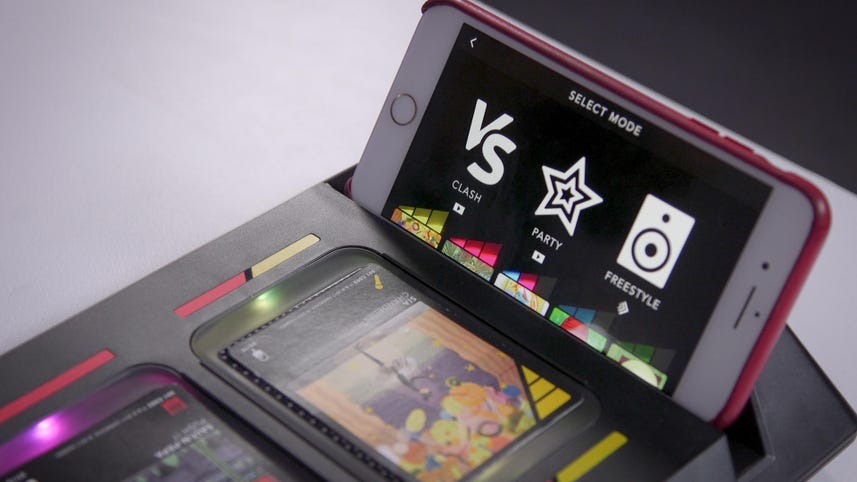 It's all good and fun, but there are issues. For $99, AU$199 and £119, you'll get the board and a deck of 60 cards. You'll run through that 60 in a fairly short time, so you'll probably need more cards. You'll have to pay for those though, with genre playlists going for $15, AU$25 and £15. The game also relies on you having your own phone or tablet. You probably have a smartphone if you're reading this, but it's certainly better experienced on a tablet. A good set of speakers to connect it to is also key.

Plus, there's the issue of how many of the songs here you actually know. It's less fun to mix and match song elements if you can't, y'know, recognise the song elements. There's a good mix of music across pop, rock and hip hop, but you'll have to be across a fairly wide range of music to get the most out of the game.

I found DropMix to be entertaining during my time with it, as did many of my colleagues. But there were also some who were amused by it, but for whom the novelty wore off quickly. I can't say the same wouldn't happen to me if I played it extensively for more than a few days. For that reason, it's hard to give DropMix an unqualified recommendation. Still, there's no denying it's a sound to behold.