Google's second-gen extra-large Pixel phone is its best, but the display leaves some bristling.

When it comes to the camera, processor and software, the Pixel 2 and Pixel 2 XL are both identical and fantastic. The differences between the two come down to price (obviously), size, bezel width and screen technology. We loved our early experience with the Pixel 2 XL, but any potential buyers need to know about some problems with its screen that have come to light since we first reviewed the phone, and the upcoming software fix Google says will address it.

The Pixel 2 XL perks up the already excellent Pixel 2 with more screen space. It has a fantastic camera, waterproofing and the Google Lens feature that helps you learn more about the world around you.

The camera's Portrait Mode doesn't work as smoothly as its competitors' dual camera. Its battery doesn't last as long as others in its caliber and the phone has no headphone jack or wireless charging. The displays on some handsets have irksome screen problems.

A bigger, sharper screen and thinner bezels make the Pixel 2 XL the more desirable Google phone, but some early units have been dogged by screen issues.

The Pixel 2 XL has a bigger 6-inch display and a higher resolution than the 5-inch Pixel 2. But it also uses a different technology, a plastic-OLED (POLED) display, while the Pixel 2 has a more traditional AMOLED screen.

Within the first week of its availability, there have been reports of the Pixel 2 XL display exhibiting screen burn-in, wherein remnants of earlier images remain on the screen, despite not being actively displayed. In two of the five Pixel 2 XLs we have, we saw evidence of screen burn-in.

When I displayed a gray color swatch on my review unit, I saw outlines of the notification bar (which includes the time and battery status) and the navigational hotkeys at the bottom of the display. These faint lines still lingered after the display was turned off overnight and after running a screen burn-in fix video, which suggests that this issue is more persistent than image retention (a temporary form of screen burn-in).

Screen burn-in is a known issue that affects various types of displays where images -- like on-screen navigation buttons -- remain in the same spot for an extended period of time. The Nexus 6, which had an AMOLED screen, reportedly had similar issues. But it usually happens after some time, and the fact that it's happening on a phone as expensive as the Pixel 2 XL so soon is concerning. We haven't seen burn-in issues in the smaller Pixel 2, the LG V30 (which also has a POLED display) or the Galaxy S8.

Keep in mind, however, that when we ran the same gray swatch test on three other Pixel 2 XLs, we didn't see any burn-in effects on them -- not yet, anyway.

When I tested to see its effect on YouTube videos, an app that uses the entirety of the phone's display, I generally didn't notice anything out of the ordinary. But I could see ghostly outlines of the hotkeys when I went looking for them. They showed up when a video happened to show light colors at the right side of the screen for more than a few seconds.

What can I do if I'm affected?

We don't know how many units are affected. Upon investigating the issue, Google announced on Oct. 26 that the Pixel 2 XL's burn-in issue was "in line with that of other premium smartphones and should not affect the normal, day-to-day user experience" (despite the fact that, again, we didn't see burn-in on the LG V30 or Galaxy S8). The company promises ongoing software updates starting in the next few weeks that will optimize the phone against burn-in, stating:

Those who purchased the Pixel 2 XL through the Google Store can return it within 15 calendar days after they received it. Pixel 2 and 2 XL users specifically are entitled to a two-year warranty worldwide (extended from one year, as of Oct. 26) so long as the phone was purchased through an authorized retailer. (For more information, read about how to return your Pixel 2 XL).

Note, however, that the Google Store generally has more liberal return policies than other retailers. That's why it's best to purchase Pixel phones there, rather than through a carrier or other retailer. We've reached out to Verizon about its return policy specifically related to the Pixel 2 XL. In the mean time, inquire with your local Verizon retailer to initiate a return.

There's another, more minor screen concern. Google has deliberately calibrated the Pixel 2 XL display to have a more muted and washed-out appearance than what you'll find on the Galaxy S8. There's also a bluish hue that's visible when tilting the phone at different angles (this is known as blue shift).

Watch this: Why are people talking about the Pixel 2 XL screen?
01:15 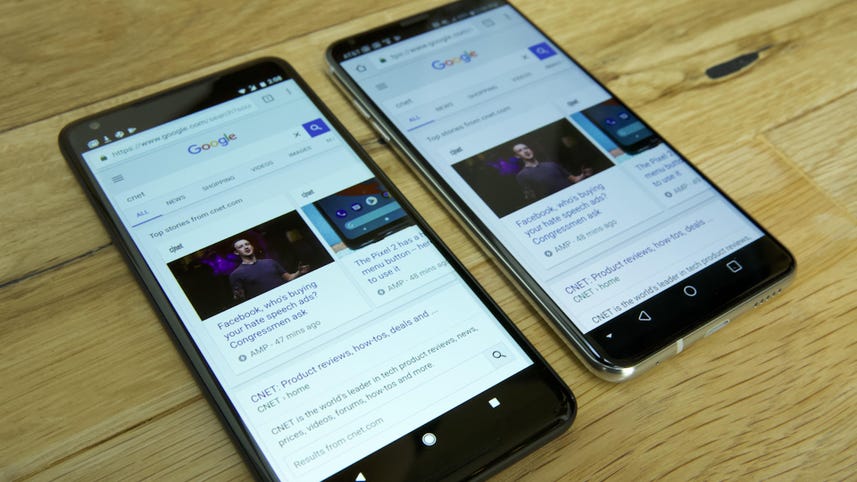 Why are people talking about the Pixel 2 XL screen?
1:15
Watch Now

While the Pixel 2 XL's screen isn't as vibrant as some of its competitors, I don't view this problem as a deal-breaker. The display is still sharp and bright, and you can only see differences when comparing these phones side-by-side. It comes down to a matter of personal preference: If you want to see more saturated colors (that aren't necessarily accurate), go with the Galaxy S8. If not, the Pixel 2 XL is completely satisfactory. As for the blue shift, this is a hardware issue you'll find on most phones if you tilt the screen far enough. How wide you want this tilting window to be depends on your tolerance.

Unlike the issue of burn-in, though, software changes could ameliorate the Pixel 2 XL's color palette quickly. Google stated (again, as of Oct. 26) that based on user feedback about this issue, it will add a new mode for saturated colors through a software update in the coming weeks.

To pixel peepers -- anyone for whom screen quality and color accuracy is a top priority -- these issues can be irksome, and if having a superlative screen is a priority for you (and that's totally fine if it is), I suggest a few great alternatives below. That includes the smaller Pixel 2, which has the same camera features, software goodies and processing speeds as the Pixel 2 XL, but uses a different AMOLED screen.

In the meantime, we're keeping an eye on our other Pixel 2 XLs to see how they fare over time with normal use. Right now, we don't know how serious or how widespread the burn-in issue is (are these anecdotal issues with an early batch of screens, or are they symptomatic of an endemic problem with the product?), or how well Google's upcoming software updates will help ameliorate the problem.

As such, we aren't changing our review rating for now, but we may do so at any point in the future when and if warranted by continued testing or third-party reports.

If these display problems don't deter you from the Pixel 2 XL's roomy size, promptly updated Android software and peak performance, the phone is still otherwise great. It's also entirely possible that your unit will be problem-free.

If you opt for the XL, we'd recommend that you take a look at it in real life to make sure you're happy with the screen's color palette, and compare it side-by-side with the standard Pixel 2 and Samsung Galaxy phones. When purchasing, verify the vendor's return policy -- again, the Google Store is the safest bet -- and pay close attention to the screen while in the 15-day return period.

The phone is available through Verizon, the Google Store, Project Fi and Best Buy. The Pixel 2 XL comes in two color variants: Just Black and Black and White (which reminds us of a tuxedo/penguin/panda) and costs $849 (64GB) and $949 (128GB).

Pixel 2 XL vs. the competitors