Here are the Android 6.0 Marshmallow features that matter

Android 6.0 Marshmallow is out now. This is everything you need to know about Google's mobile operating system update.

Sarah Mitroff is a senior editor for CNET, managing our health, fitness and wellness content. She's written for Wired, MacWorld, PCWorld, and VentureBeat.

A new year, a new version of Android. For 2015, the candy-themed update is all about behind-the-scenes tweaks and a few blockbuster features.

With Android 6.0 Marshmallow, as it's officially called, Google focused on a few big new features, like Now on Tap, and smaller changes for better battery life and performance. Instead of a completely revamped look, the operating system uses the same colorful Material design theme introduced with Android 5.0 Lollipop last year.

Here's what's new in the update, which rolls out today to Nexus phones first.

Editors' note, October 7, 2015: This post has been updated to remove the landscape homescreen feature which was in a developer preview, but did not make it to the final release of the OS.

6 reasons to get excited for Android 6.0 Marshmallow

Google Now is more accessible and helpful than it's ever been. Now on Tap is a new feature that pulls up extra information in top of whatever you're doing, based on what's on your screen.

It's essentially an "easy button" for your phone and here's how it works. Press and hold the home button on your phone -- Google says it should work on a variety of phones with both onscreen and physical home buttons. You'll see a short animation and then a small card (0r cards) will appear, giving you information and app shortcuts.

What's on the cards depends on what's on your screen. For example, if you're texting a friend about where to meet for dinner, mention a restaurant name in your message and then activate Now on Tap, the card will give you options to call the restaurant, find it on Google Maps, or view reviews on Yelp. Or if you're looking at email plans to see a movie, Now on Tap will show ratings, links to the movie's page in the IMDB app and a YouTube to link to the trailer. 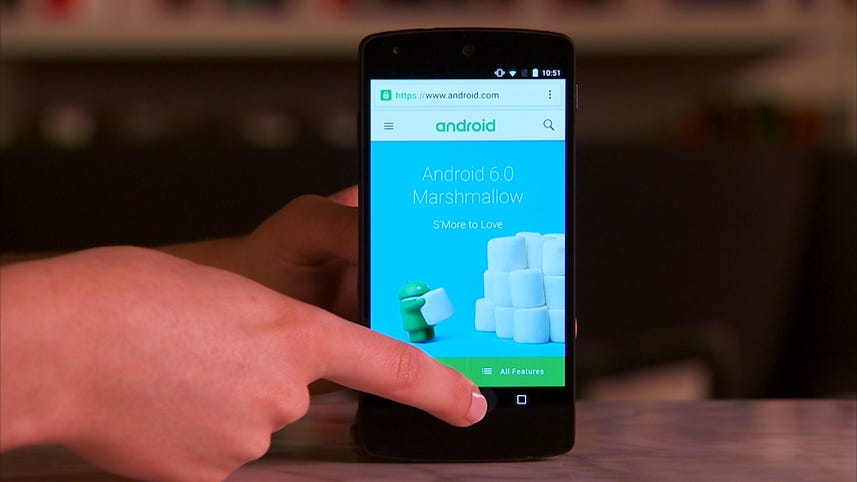 Three ways to use Google Now on Tap
2:18
Watch Now

Now on Tap includes shortcuts to apps on your phone, where appropriate. For instance, with the OpenTable app installed, you'll be able to use an OpenTable shortcut from the Now on Tap card to book a table. If you're looking at a card about a famous person and tap the Twitter shortcut, it will load that person's profile page in the app on your device. This deep-linking technology is something that Google's been working on a for a while and it really shines with this new feature.

Another part of Now on Tap is that you can run a voice search and Google will use the context of what's on the screen to give you results. A great example is if you're looking at a restaurant in the Foursquare app and ask Google how far it is from you. Google knows you are referring to the restaurant on your screen and gives you the right travel times. This also works if you're playing music on your phone; you can ask for details about the artist or band -- "Who's the lead singer," "What's the No. 1 hit?" -- without even using their name.

Google Now on Tap aims to do two things; give you quick answers and help you figure out the next step. It's well designed to appear when you need it and then disappear so you can go back to what you were doing.

Though it's not only for Android 6.0, the new update goes hand in hand with Android Pay, Google's new mobile payments system. Android Pay will let you make purchases at participating stores using your phone's NFC chip. As with Apple Pay, you can hold your phone to the credit card terminal and follow the onscreen prompts to pay. Samsung Pay works a bit differently, allowing you to pay at different kinds of credit card machine, not just those that support NFC.

Android Pay also lets you make purchases on your phone, such as paying for an in-app purchase. Google Wallet, Google's original mobile payment app, is changing to handle only peer-to-peer payments that you make between friends, family and others.

If your phone has a fingerprint reader, like the new Nexus 5X and Nexus 6P do, you can authorize payments with your print, as you can with iOS. Android Pay works with 700,000 stores, including Walgreens, Macy's and Best Buy in the US.

Google's Nexus devices now support the new USB Type-C standard of charging cable. That means it can be charged or can also charge other devices. Better yet, it's got the same shape on both sides, meaning you won't have to grapple with which side is "up."

That's for charging up, but what about saving power to begin with? Android 6.0 Marshmallow also includes Doze, an automatic energy-saving feature that Google says will use less power than the current standby mode. Basically, if you walk away from your device for a lengthy period of time, it hibernates to save your battery. You'll still hear important alarms and incoming messages, but with as little as half the power consumption of the earlier version.

This adds additional security to Android and gives you more control over how apps can use your phone's resources.

This feature is a bit more behind-the-scenes, but Google has included support for a fingerprint reader. This allows the Nexus 5X and Nexus 6P to use a fingerprint scanner to unlock your phone as well as apps, plus you can now use your fingerprint to authorize payments.

The app drawer, the menu where all of the apps installed on your phone or tablet live, has a new layout in Marshmallow. There's a search bar at the top, where you can quickly find an app. Below that are the apps Google thinks you want to use right now, based on time of day or your typical app-opening habits. The app drawer now scrolls up and down, instead of left and right, which is a bit of throwback to earlier Android versions.

We're just getting our first tastes of the final release of Android 6.0 Marshmallow. Over the coming weeks, we'll kick the tires on the new version and update this post with everything you need to know.