GE GTW485ASJWS review: This affordable washer is tougher on clothes than stains

GE's $650 GTW485ASJWS may be wallet-friendly, but its traditional agitator might just wreck your clothes.

The $650 GE GTW485ASJWS might be one of the simplest washing machines you can buy today. It doesn't have a ton of advanced settings, an LED-bedazzled digital display, or on-board Wi-Fi connectivity. You won't find a second washer tucked inside a hidden compartment like the LG Twin Wash or a built-in sink like the Samsung WA52J8700.

At $650, the GTW485ASJWS is one of GE's most entry-level washers. It also boasts 13 cleaning modes and a Deep Fill feature that lets you add as much water to a cycle as you want.

The GE GTW485ASJWS is fine if you're looking for an affordable top-load washer -- just keep in mind that its agitator isn't forgiving when it comes to wear and tear.

But what the 485 lacks in pizazz, it makes up for with a traditional agitator -- something folks nostalgic for the days of laundry-past will like. The downside, of course, is that agitators tend to be tougher on fabric than the impeller-style designs you'll find on most pricier top-loaders. It did do a decent job removing stains, though. Yes, GE's GTW485ASJWS will do fine overall, but you might want to spend a little more for an impeller washing machine if you're concerned about wear and tear.

While the 485 doesn't exactly do anything innovative in terms of design, it's a nice looking machine considering its price. Available in a glossy white finish, it features the same 13 cleaning cycles as more expensive GE washers. They include:

It also has a Deep Fill setting, which lets you add more water to a cycle. This isn't great in terms of efficiency, but it does let you customize the fill level if you think the washer isn't adding enough water on its own. Press the Deep Fill button at the top of the display panel either before a cycle begins or after it has finished auto-filling. Press it again to stop it.

The straightforward display features one dial each for soil level, temperature, cleaning cycles, options (this includes things like Auto Soak and Extra Spin), and stain pre-treat.

Here's a look at the 485's basic specs compared to other top-load washers:

The main difference here is bin capacity. Where models like the GE GTW810SSJWS, the GE GTW860SPJMC, and Samsung's WA52J8700 all have capacities over 5 cubic feet, the 485 has just 4.2 cubic feet of space. This is mainly due to the built-in agitator, although its dimensions are also slightly smaller. 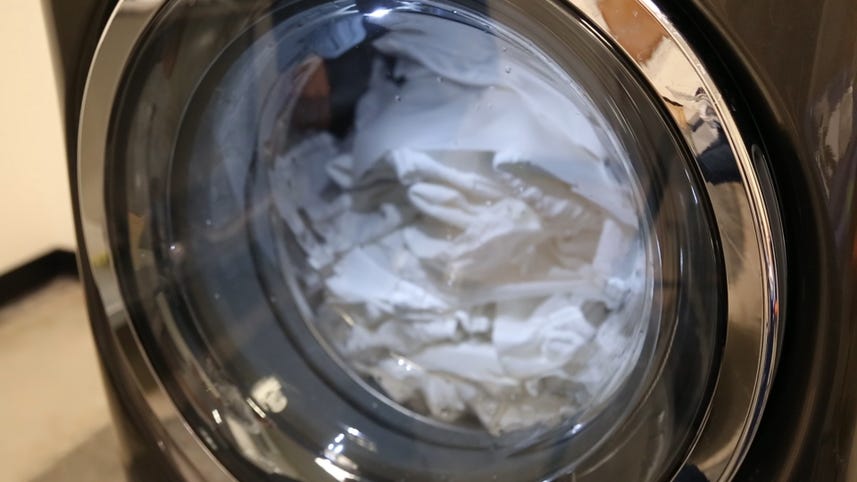 A washing machine agitator is a piece of plastic that sprouts up from the bottom of the washer and extends up to the top of the bin. It was a common feature in previous generations of top-load washers, but many have been replaced with impellers. Unlike agitators, impellers live at the bottom of washer bins. They feature grooved designs that can still agitate clothes, but tend to be less intrusive.

The 485's agitator actually did better than two of GE's impeller-style top-load machines we've reviewed when it came to stain removal. Check out this post on how we test washing machines if you want more details (or watch the video above for an overview).

But it did struggle in terms of wear and tear, with an average of 266 attached, frayed fabric threads that measured at or over 2 millimeters long. The GTW810SSJWS and the GTW860SPJMC averaged 241 and 230 threads, so they were less tough on clothes than the 485.

GE's $650 GTW485ASJWS is a fine washer, but it's a bit outdated by today's laundry standards
. That could be a bonus if you prefer traditional agitator-style machines. It's also one of the simplest machines I've reviewed so far -- no fancy extras to complicate usability. At the same time, it's tough on clothes. If you're just looking for something affordable that gets the job done, the GTW485ASJWS will work fine. But you might want to look at some other options before making a final decision.
7.1