Consider this air fryer to save cash if you're cooking for a small group.

Black & Decker's $100 Purifry isn't your typical kitchen countertop air fryer. It's compact, affordable and simple to operate. It creates food that tastes deep-fried and delicious. And the Purifry does so using little to no oil, as an air fryer should.

The Black & Decker Purifry gives food a deep-fried taste with little to no oil. It's relatively affordable and simple to use. It's compact compared to other air fryers.

It doesn't cook a lot of food at once. It lacks an automatic stirring arm. Labels for its temperature settings are small and tough to read. It feels cheaply built.

The Black & Decker Purify air fryer is a perfect for frugal shoppers, but you'll need something bigger to feed a crowd.

But the Purifry does have its flaws. Its comparatively small size means it can't handle much food at once. The appliance also lacks a motorized stirring arm, which means you can't set it and forget it like other air fryers. And the product's thin metal and plastic parts feel cheap and fragile.

The Purifry is a good product if you want to save some money on an air fryer and you only cook for one or two people. But if you want a bit of an upgrade, I suggest the $230 DeLonghi Multifry. It's expensive, but it's much sturdier and cooks in bigger batches than the Purifry.

Small for an air fryer

The egg-shaped Purifry is constructed from steel and plastic. Its black-and-silver color scheme (it also comes in white) easily blends in with contemporary kitchen decors. The entire apparatus is the size of a small coffee maker or standard electric juicer, and it's taller than it is wide. As a result, it shouldn't eat up that much counter space.

In terms of controls, the Purifry only has two dials on its front face. A timer dial sets how long the Purifry will run (a maximum of 60 minutes). The other dial controls the Purifry's internal temperature. The knob starts at 175 degrees Fahrenheit (80 Celsius). The next dial position is 200 degrees F (110 C). From there, temperature settings jump in 50-degree (F) increments, topping out at its maximum heat level of 400 F (200 C). I have one big problem with this knob: Its text labels are ludicrously tiny and difficult to read.

Underneath the controls is the Purifry's cooking chamber, also known as its pan. A big handle juts out of this section and occupies most of the fryer's bottom half. To remove the Purifry's pan, you slide a clear plastic tab on the top of the handle away from you. At the same time you pull the pan's handle toward you.

That plastic tab also covers a release button for the fryer's food basket. I'm not a fan of the button cover. It's thin, and it rattles around loosely on the handle. It feels as if it's about to pop off any second.

The food basket sits inside the Purifry's pan. You press the release button to detach the basket from the pan. Make sure you secure the pan first -- the action happens suddenly since the pan is much heavier than the basket. The perforated basket is made of thin metal. These holes facilitate the flow of hot air, which is critical for high convection cookers such as this.

It's easy to air-fry

Air-frying food with the Purifry is relatively easy, but it takes a little bit of elbow grease. First, you insert the pan (don't put your food in it yet). Then, you set the temperature and set the length of time you expect to cook. The Purifry will fire up its heating element and convection fan. Unlike other air fryers like the DeLonghi Multifry, you have to preheat the Purifry before you insert your food. It can take as many as four minutes for the Purifry to preheat to 400 degrees Fahrenheit. A green preheat light on the front of the fryer glows when it's actively heating up.

Once hot, you open the Purifry's pan and drop in your items. Unlike the Multifry, this appliance doesn't have a motorized stirring arm. Instead, you have to pull the pan out of the fryer and give it a gentle shake several times throughout the cooking process (the fryer pauses automatically when you remove the pan and resumes when you re-insert it). This helps ensure that your food browns evenly and is cooked throughout.

Watch this: The Purifry lets you air-fry your food on a budget
01:05 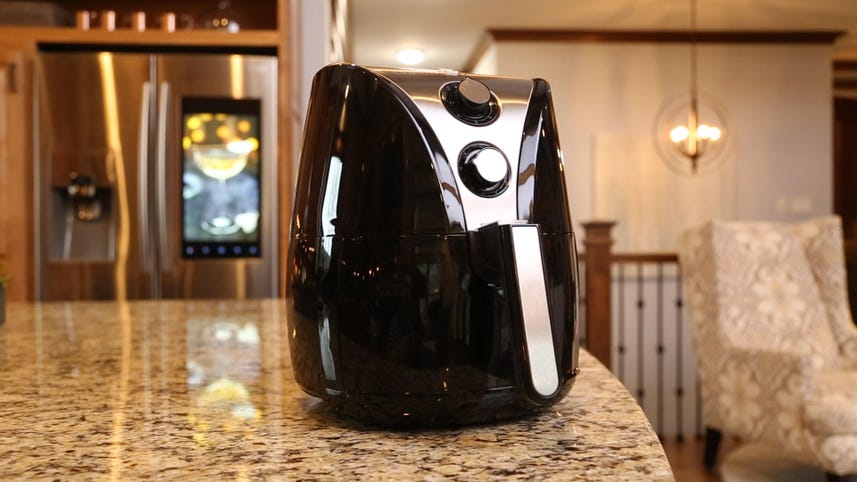 The Purifry lets you air-fry your food on a budget
1:05
Watch Now

Purifry is best for a small crowd

The Purifry is not ideal for big groups or large families. Its fry basket is small, and so are the portion sizes it cooks best. For instance, the manual recommends you make french fries in half-pound batches (226 grams), which is only two four-ounce servings. The Purifry took just under 15 minutes to prepare this amount of frozen, crinkle-cut fries.

You can, however, cook more food than recommended in the Purifry. For example, I increased my test amount to 23 ounces, the typical amount you can fit on one baking sheet. The Purifry finished the job in just under 27 minutes.

Regardless of how much food I cooked, the Purifry nailed the end result. French fries were quite crispy on the outside yet soft and creamy on the inside. They weren't powdery or dry, an issue that often plagues oven-baked fries.

Just for fun, and because it's in the manual, I dropped a 7-ounce burger patty inside the Purifry. Nineteen minutes later, I was treated to a surprisingly flavorful piece of meat. Tender and juicy, I never expected to enjoy a burger this much from an air fryer.

Chicken wings were another area where the Purifry delivered the goods. Perhaps it's because I only cooked a small batch of four wings at a time. Or maybe air circulates faster inside this fryer. Whatever the cause, chicken wings I made in the Purifry were fantastic. Their meat was moist, and skin impressively crisp.

To confirm which fryer is the fastest, I cooked 6.5-ounce (184-gram) frozen cod fillets inside both the Purifry and the Multifry. Including a 4-minute preheat time, the Purifry prepared the fish in 28 minutes, 54 seconds. The bigger Multifry cooked its fillet in less time: 25 minutes and 17 seconds.

You can't deny that the $100 Purifry is a tempting appliance. Any kitchen gadget that can whip up tasty batches of fried treats is alluring. Whether this countertop air fryer is a winner, however, depends on your lifestyle. This product makes sense for casual home chefs who plan to fry a few items occasionally. Its low price is less of a commitment to make, as well. The fryer's compact size is also easier to tuck out of sight compared with larger models. But party animals who entertain often or members of big households should look to the $230 DeLonghi Multifry instead -- it's a sturdier appliance that air fries bigger portions fast.

Are you curious about all the other air fryers we tested out? Read our air fryer roundup here.