The Asus FonePad is a well-built tablet, but a ridiculous phone concept (hands-on)

It won't be released in the U.S., but the Asus FonePad is available to U.K. customers now. It's a good 7-inch tablet, but is a pretty silly phone concept.

Eric Franklin leads the CNET Reviews editors in San Francisco as managing editor. A 20-year industry veteran, Eric began his tech journey testing computers in the CNET Labs. When not at work he can usually be found at the gym, at the movies, or at the edge of his couch with a game controller in his hands.

See full bio
5 min read
Watch this: The Asus FonePad works well as a tablet, looks ridiculous as a phone
02:39 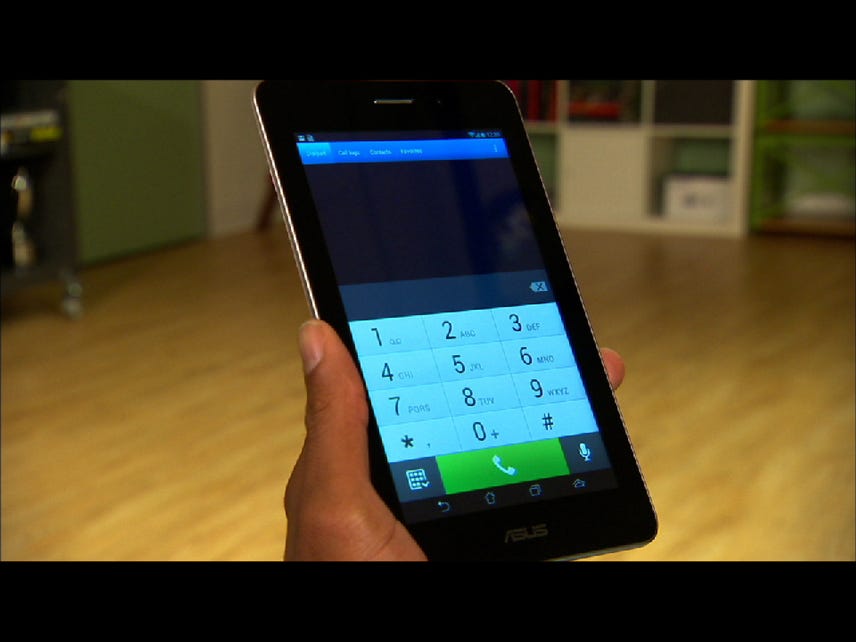 The Asus FonePad works well as a tablet, looks ridiculous as a phone
2:39
Watch Now

As its name alludes, the FonePad is one of those tablet/smartphone -- or phablet -- doohickeys. Like the Samsung Galaxy Note 2, it features a large screen and you can make calls on it. However, with a 7-inch screen size, Asus has taken the FonePad to a whole new level of ridiculousness.

Holding the tablet to your head to make calls is awkward and looks (and feels) genuinely comical. Those whose first inclination at a concert is to whip out their iPads and start taking pictures have already shown us that some people have no shame when using their tech devices. I do and would not be caught in public holding the FonePad to my face.

The Asus FonePad is a good tablet. It's no Nexus 7 in the performance, price, or always-having-the-latest-version-of-Android department, but it performs well, has a sharp screen, and a comfortable and durable build.

And if you're willing to face the embarrassment and physical awkwardness of holding a Nexus 7-size slate to your head when making calls -- sure, you could use a headset, but a 7-inch tablet isn't nearly as portable as a phone -- its 178-pound (or $275 if imported) price isn't a bad deal for an all-inclusive device. However, if you’re strictly looking only for a tablet, skip this and buy the Nexus 7.

The Asus FonePad is available now in U.K., but Asus has no plans to release it in the U.S; however, it will work as a phone here in the states. I used an AT&T SIM to test it without any technical complications.

+5 more
See all photos
Design and features
Like the Asus Memo ME172V, the Asus FonePad is essentially a slightly redesigned Asus-made Nexus 7. It's roughly the same size and has the same silver trim around its edge, but instead of a grippy leathery backside like the Nexus 7's, it instead features a silver aluminum back. The Nexus 7 is still more comfortable to hold, but the FonePad's slightly lighter metal body feels more durable.

The power and volume buttons sit along the tablet's left edge, which feels awkward and weird to me, like it did on the Memo. On the bottom edge is a Micro-USB port, headphone jack, and a microphone pinhole. The front-facing camera sits on the top of the bezel toward the right, directly left of the phone speaker. On the back, there's a rear-facing 3-megapixel camera located in the top center with a small speaker grille several inches below it. The microSD card slot and SIM card slot are both hidden under a removable panel near the top, above the rear camera. While I appreciate the extra storage option, the panel is a bit difficult to remove; a more ergonomic solution would have been preferred.

The FonePad ships with Android 4.1.2 (Jelly Bean) and its interface follows the same style as the Nexus 7's, with a toolbar of apps at the bottom or right side of the screen, depending on the tablet’s orientation. It also includes several useful Asus customizations. Chief among them is Asus Splendid, which allows you to adjust the hue, color saturation, and color temperature of the tablet's screen. There's also a "Vivid Mode" option that appears to boost the contrast. While making adjustments, you're given the option to see in real time how your changes affect your choice of three different images: color bars, the current background image, or a colorful picture of fruit.

We've see screen options before on tablets, but never have we been allowed to get as deep with color customizations that truly affect the display's presentation. I just hope that Asus continues to offer and build on this feature.

The Power Saver option acts a bit differently than it does on other Asus tablets. Instead of throttling the CPU's speed depending on the power profile you've selected, the three profiles -- Ultra-saving, Optimized, and Customized -- will only affect the brightness of the display and whether Wi-Fi is turned on. You can also customize the screen's brightness for different tasks like reading books, watching videos, browsing the Web, etc.

The FonePad includes several built-in mini-app widgets: a browser, video player, calculator, and battery meter, among others. The widgets can all run concurrently, and unlike on the Memo 172V, performance remained smooth while doing so.

And it's a phone
It may not surprise given its name -- despite the spelling -- that the FonePad is not only a tablet, but also a full-fledged, honest-to-goodness smartphone. Yes, you can make and receive calls on the FonePad just as easily as you would on a Galaxy S4, but the device is still much larger than even 5-inch "phablets" like the Note 2 and Optimus G Pro. If you thought those were cumbersome, inconvenient, unwieldy, or a bit weird-looking, you ain't seen nothing yet. Once you catch yourself in the mirror holding a 7-inch tablet to your head and talking into it, you'll understand the true meaning of silly-looking.

And beyond any embarrassment you may feel using it in public, it's just unwieldy when attempting adjust in one hand, especially if you have small hands. The FonePad doesn't include a headset, unfortunately, which would be the ideal way to use it.

I used an AT&T SIM card to test the call quality here in San Francisco. Voices came in fuzzy and a bit "breathy" on both ends when calling a landline. Speaking into the FonePad, I definitely had to make sure I spoke loudly and clearly in order for the other party to hear me. Also, with the speaker enabled, it was difficult for the person on the other end to clearly hear my voice unless I put the mic right up to my mouth. I experienced no dropped calls nor any problems connecting using AT&T's GSM network in San Francisco.

Texting worked normally and felt no different than simply typing an e-mail out on the tablet.

The Intel Atom Z2460 CPU delivers virtually stutter-free OS navigation with a near-constant 60 frames-per-second refresh rate, but apps take a frustratingly long time to load. The front and back cameras are fine, but perform on the low end of the typical tablet camera scale. Which is to say: washed out and dithered.

Games didn't run as smoothly as they did on the Nexus 7, but of the games I tested -- Riptide GP, Modern Combat 4, and Real Racing 3 -- all produced acceptably playable, if completely unspectacular, frame rates. The single-core PowerVR SGX 540 GPU inside gets the job done, but definitely not impressively so.

App downloads were speedy over Wi-Fi and about a third as fast using an AT&T SIM in San Francisco. Battery life drained moderately slow over a day's use, but definitely springs a huge leak when using the Outdoor screen brightness mode. Here are our official CNET Labs-tested battery life results. More tablet testing results can be found here.

First thoughts
Despite the utterly ridiculous notion of holding a 7-inch tablet up to your head and speaking into it, the Asus FonePad tablet performs well enough and has a truly useful screen adjustment feature. It's a fine tablet, but 178 pounds ($275) is too much if you're not planning to use the phone feature. The Asus-made Nexus 7 is still the faster, cheaper tablet choice. However, the FonePad's price is an easier pill to swallow if you're on a budget and don't mind being the butt of derisive laughter.