With a renamed, revamped operating system, your Mac is getting a lot of new features from this free update.

Since Apple delivered the latest overhaul of its MacOS operating system in September 2016, it's refreshed its lineup of 13- and 15-inch MacBook Pros. Considerably slimmer, faster and pricier than their predecessors, the new models feature some innovative flourishes -- most notably, Apple's dynamic Touch Bar. (There is also a less expensive 13-inch model without the Touch Bar.)

The common theme among the MacOS Sierra release and the new MacBook models is a greater emphasis on usability and productivity, rather than performance per se. Exhibit A: the Touch Bar -- a mini display that runs along the top of the keyboard that provides different icons and options for different apps; sliders, hot keys and function buttons emerge on the fly as needed. The newest version of MacOS (release 12.10.1), which comes factory-installed on the new MacBooks, leverages the new TouchBar functionality. Also, for the first time, it integrates Apple's voice-enabled assistant, Siri, with the Mac operating system; provides new ways to share across and synchronize Apple devices; and brings Apple Pay to the desktop.

Watch this: Apple tries the second-screen approach with the MacBook Pro Touch Bar
02:34 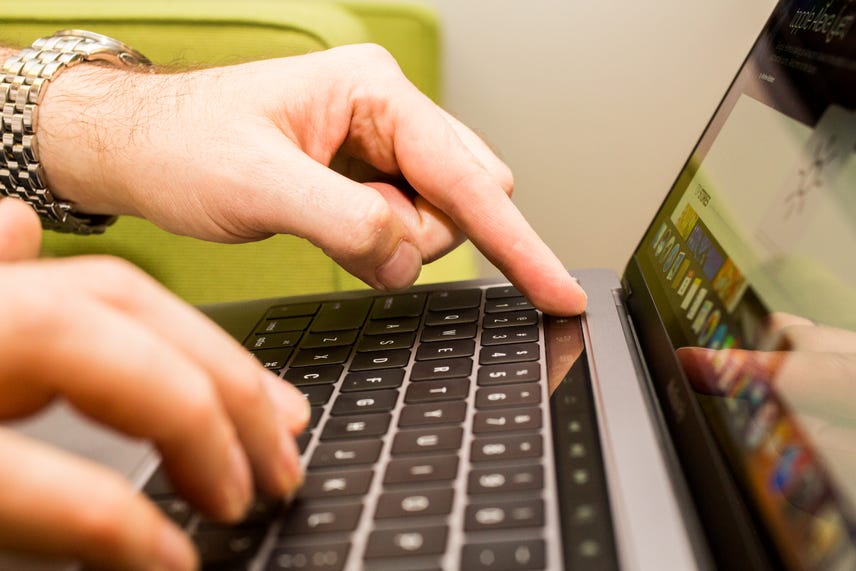 Note that the new MacBooks also make some difficult trade-offs, the most significant of which is a dearth of ports. In fact, buying a new MacBook Pro will likely force you to invest in a variety of adapters for all your legacy devices. Though MacOS Sierra clearly demonstrates Apple's interest in extending the integration of Macs and iOS products, at the moment, it's imperfectly executed. The new MacBooks, for example, equipped as they are with only USB-C ports, can't connect to the new iPhone 7 and its Lightning Connector, without an adapter.

Even without new hardware (yet), there are a lot of changes coming to Apple's Mac line of computers. The operating system that powers MacBooks and iMacs (as well as the Mac Mini and Mac Pro) has gotten a big new refresh. So big, in fact, that it now has a whole new name.

Out is OS X (pronounced oh-ess-ten), followed by an ever-increasing version number, currently 10.11; in is MacOS, a new name that's much more in line with Apple's other operating systems, which include iOS (for iPhones and iPads), WatchOS (Apple Watch) and TVOS (Apple TV).

It's yet another step in a long path to a grand unified theory of Apple operating systems, and it highlights increasing cooperation between Macs and other Apple devices and services. The code name for the first version of MacOS is Sierra, and it's available starting today as a free update to current Mac owners (for all Macs from 2010 or later, and a handful of 2009 systems), and will come preinstalled on Mac systems going forward.

The last couple of Mac operating systems upgrades, 2015's El Capitan and 2014's Yosemite, were less an overhaul and more a collection of handy features and enhancements. MacOS Sierra takes that a bit further, adding new features that are inspired by iOS or are designed to help Macs work better with iOS products, adding further incentive to keep your hardware inside Apple's walled garden, which includes the iPhone, Apple Watch and Mac computers.

Voice assistants are hot right now, from Alexa on the Amazon Echo to Cortana on Windows to the original, Apple's Siri. Once restricted to iPhones, she's now ready to move into your Mac.

It's still the same familiar Siri voice (depending on your region), and she does most of the same things as the iOS version. You activate Siri through a keyboard command, Cmd+Space, or by clicking the Siri icon in the dock, then simply speak your query.

All the standard things -- weather, news, local shops and landmarks -- work as expected. You can pin results, from sports scores to stock prices, to the notifications panel and see them anytime. That's a handy extra if you find yourself looking up the same info over and over again.

The most useful new trick with desktop Siri is for searching files, which you can do by type, by date, or by keyword. For example, you can easily call out all spreadsheets, or all image files from the last two weeks with the word "screenshot" in the title. It's a handy way to zero in on files, especially if, like me, you're not very good at keeping files organized.

New sharing and optimization in iCloud

Using iCloud for storing and sharing photos and files is well-established at this point, and people use Google Drive, Dropbox and other cloud services for similar purposes. But, by checking off a new checkbox in the iCloud settings menu, files on the desktop or in the documents folders of multiple Macs can now be automatically synced. That's handy if you have, for example, a work and home Mac that you need to jump between easily.

Drop a file or add a screenshot to the desktop of one MacOS system, and a few seconds later, it pops up on the other ones. The documents folder, the other place you're likely to store important files, works similarly, but each machine gets a named folder within the documents folder on its sister machines.

There are plenty of ways to sync files between machines, but I liked how effortless this was, and especially how it gave me access to identical desktops (where I keep a lot of in-progress files) across different Macs.

A handful of new optimized storage options can keep more files on the cloud, rather than on your physical hard drive. For example, MacOS can be set to automatically delete iTunes movies and TV shows that have been watched, keep larger mail attachments in the cloud, or to clear items from the trash folder after 30 days.

Messages on iOS includes some eye-catching upgrades, such as bigger emojis and more dramatic text, including messages that boom or shake, plus ones written in "invisible ink," that reveal their content when you rub a finger over it (or, on the Mac, when you mouse over it).

Are bigger emojis on the Mac desktop version of Messages a real game-changer? Perhaps not, but Messages remains one of the smoothest phone-to-computer crossover messaging systems. To use the new features, including invisible ink, you need both MacOS on your computer and iOS 10 on your phone. (But text and photo messaging will still work to your Android friends.)

This is a small new feature, but a potentially very useful one. On select websites, videos can be popped out of their in-line spaces and instead play in a small pop-out video window off to the side of the screen. That way, you can watch while surfing other websites or doing other work. Among the first round sites where you can try this are ESPN and Vimeo. Most HTML5 videos should work as well -- and with Flash video on the run, that list should get longer in the near future.

Unlock your Mac with Apple Watch

If you own an Apple Watch, it can be used as a form of authentication to unlock a Mac, as long as your Mac is running MacOS and your watch is running WatchOS 3, and both devices are signed into the same Apple ID.

There's a good deal of setup required, which includes setting up two-factor authentication through the security page of the Mac's system settings, and making sure your Apple Watch has a passcode set. I also had to enter at least two other automatically generated one-time passcodes while getting the MacBook, Apple Watch and iPhone all on the same page, and even had to remember some obscure verification questions about the dummy iCloud account I was using ("What's the first food you learned to cook?").

Unlike most of the other new features in MacOS, setting up the Apple Watch to unlock my laptop was a lengthy process with multiple steps across multiple devices, at times poorly explained. But, once it was (finally) set up, it worked as advertised.

We found the connection worked at a fairly long range depending on where we had it set up. In most cases, between five and seven feet was the edge of range, but in some cases, it worked at up to nine feet away. Keep that in mind if you're on the other side of the room -- your laptop may not be as locked as you think it is. When the Apple Watch is too far, you'll either be prompted for the password as normal or get an error message saying the signal was too weak.

Watch this: How far can an Apple Watch unlock a MacOS MacBook from?
01:59 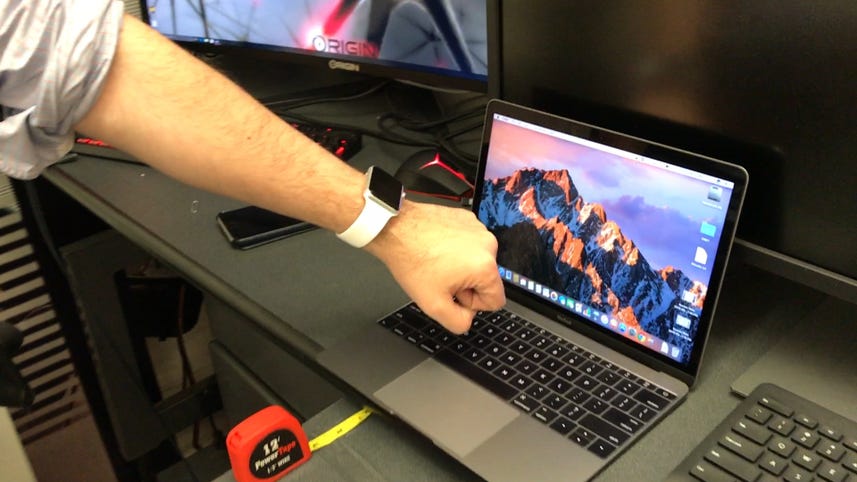 How far can an Apple Watch unlock a MacOS MacBook from?
1:59
Watch Now

This feature lets a Mac and iPhone share a clipboard. For example, copy a URL from Safari on the iPhone, and paste it right into the address bar on the web browser on your Mac. It's simple, but both devices need to be signed into the same iCloud account, have Bluetooth on, and be near each other.

Initially, the feature didn't work when I tried it, but rebooting both devices fixed that. After rebooting, it worked in both directions, but with a tiny bit of lag as the clipboard info traveled from one device to another. Note that whatever you copy to your shared clipboard expires after about two minutes (but it stays on the clipboard on the original device).

We haven't had a chance to test every new feature in MacOS Sierra yet, but other notable new skills include:

Where to get it, and how much it costs

Like all recent OS X updates (and Windows 10), MacOS is a free update for current system owners. If you buy a new MacBook, iMac or other Mac computer after September 20, it should come preloaded with MacOS. For current Mac owners, an onscreen update reminder will direct you to download and install the new OS version, and we've found that both a clean install and an update install work well in the handful of systems we've tested it on.