The 13-inch MacBook Air looks and feels just like last year's but runs for more than 12 hours.

Newer features such as touch screens and higher-resolution displays are still missing. The ultrabook competition is catching up, in terms of design.

Apple keeps the latest MacBook Air updates on the inside, but greatly improved battery life and a lower starting price make up for a lack of flashy design changes.

Otherwise, aside from a RAM bump here and a slight price drop there, the 2017 batch is very similar to the one from 2016, with the same enclosures, ports, trackpads and screens (full listing of changes and additions). Note that the 13-inch MacBook Pro from 2015 has been discontinued though the $1,999 15-inch model from that year remains available for those who want all the ports and fewer dongles. 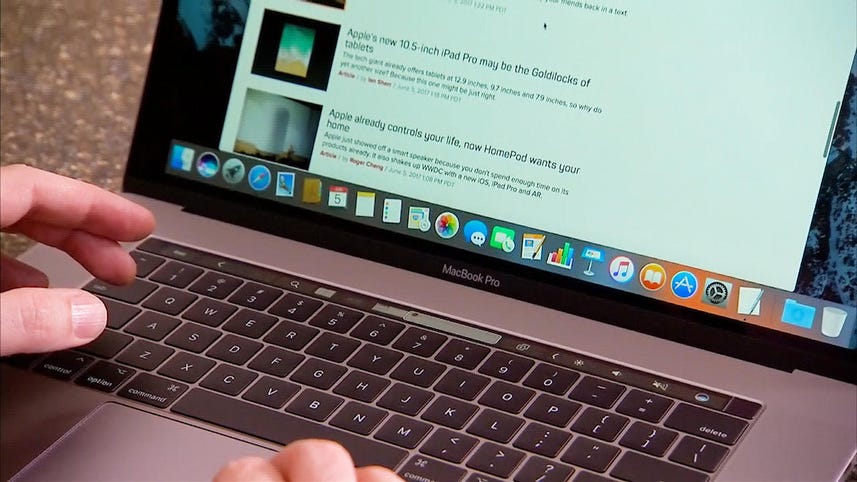 It may be a case of "the more things change, the more they stay the same."

The new 2013 versions of both the 11-inch and 13-inch MacBook Air look very familiar indeed, as these slim systems have hardly changed at all physically over the past few generations.

The Air was the only Apple laptop line to get a June 2013 update at Apple's WWDC conference. At first glance, it looks like a relatively minor set of changes, with the primary selling point being a move to Intel's new fourth-generation Core i-series CPUs, also known by the code name Haswell. There is, however, one very important difference in the new models, and one that's especially noteworthy if you spend a lot of time on the road and away from your power adapter.

We've previously tested Haswell chips in a few laptops and been impressed by both the performance and battery life gains (to be realistic, the latter is much more important for consumers). If you add Haswell to Apple's already-stellar battery life reputation, you get a system, in the 13-inch Air, that Apple claims will run for up to 12 hours, and in our tests (spoiler alert) ran even longer.

Having a Haswell-generation CPU also gives you Intel's improved HD5000 graphics, which promises improved game performance over last year's HD4000 graphics (itself an improvement over the preceding HD3000, and so on). It's still not anything like having a discrete GPU, as in the 15-inch Retina Pro, but with game services such as Steam and EA's Origin now being Mac-compatible, it may make some small inroads for OS X gaming.

Also new is 802.11ac Wi-Fi, a new standard that will eventually be found in wireless routers, as well as Apple's new AirPort Extreme and AirPort Time Capsule hardware. If you have an 802.11n router, which is a much more likely scenario, this may not help you, but it's a nice piece of future-proofing. Apple also says the solid-state-drive storage included in the Air laptops is now faster, although I think bumping the base $999 11-inch model up to a full 128GB of SSD storage (from the paltry 64GB previously sold at that same price) is a much more important development.

It's easy to say that this new version of the 13-inch MacBook Air is a modest step forward, with no physical changes to the exterior, and still no higher-res display, touch screen, or HDMI port. The battery life is a very big deal, however, and when you couple that with a $100 price cut on the base model, down to $1,099, the 13-inch MacBook Air is, despite not being the newest design on the block, still one of the most universally useful laptops you can buy.

The MacBook Air keeps the same external look as the previous couple of generations, a look that still rivals the newest ultrabooks, although some new systems, such as Sony's Vaio Pro line, are getting thinner and lighter without sacrificing much in the way of productivity.

Both the 11-inch and 13-inch versions of the MacBook Air still have the same thickness, ranging from 0.11-inch to 0.68-inch. Spread over the larger footprint of the 13-inch chassis, the 13-inch version still feels satisfyingly thin.

As with the previous version, the rigid aluminum construction makes the Air feel sturdy enough to just throw it in a bag and carry along with you without a protective case or sleeve, and it's interesting to contrast the aluminum unibody construction here with the lighter carbon fiber in the aforementioned Vaio Pro. I'd still trust the Air and its unyielding lid more in a throw-in-your-luggage field test.

The backlit keyboard and trackpad are the same as on the previous models, and the trackpad especially remains the standard by which all others are judged. Many other laptop makers have moved to larger clickpad-style touch pads, but we have yet to find a touch pad that comes close to this for multitouch gestures. The pad is again hinged at the top, allowing the entire pad to click down, and we strongly suggest going into the Preferences menu and turning on all of the tapping options for further ease of use.

It will be interesting to see how Apple's user interfaces develop in the face of both Windows 8, which tries (not terribly successfully) to reinvent the entire concept of working with a computer OS, and the upcoming OS X Mavericks update. For now, flicking around with three-and-four-finger gestures on the MacBook trackpad remains the most seamless way to swap between windows and applications, at least in my experience.

Unlike on the 11-inch MacBook Air, the 13-inch screen is still not a 16:9 display. The screen area also lacks the edge-to-edge glass over a black bezel found in the MacBook Pro; instead the screen is, as in previous years, surrounded by a thick silver bezel.

On the positive side, the native resolution of the display is 1,440x900 pixels, which is better than the 1,366x768 you find in many 13-inch laptops, although even midpriced models are quickly switching over to 1,600x900 or even 1,920x1,080. Of course the Retina Pro models, along with a handful of laptops from Toshiba, HP, and Dell, are experimenting with even-higher-than-HD resolutions.

While the Air screen isn't flat matte, it's also not terribly reflective, which is a step up from the "mirror image" effect you get on some laptop screens.

The ports and connections remain unchanged on this version of the MacBook Air. That gives you two USB 3.0 ports and a Thunderbolt port to play with, with the latter used for both external accessory and video connectivity. The faster 802.11ac Wi-Fi will play nice with Apple's own upcoming new AirPort Extreme and AirPort Time Capsule hardware, but I suspect you're still working off an 802.11n router. There's more on what 802.11ac means for you here.

The base configuration for the 13-inch Air now costs $1,099, versus $1,199 previously. Most of the system is unchanged, with the main difference being the new Haswell-generation Intel processor and platform. Interestingly, last year's base model CPU was a 1.8GHz dual-core Intel Core i5, while the newer Haswell version is a 1.3GHz Intel Core i5-4250U. The step-up $1,299 configuration keeps the same CPU as the $1,099 one, but doubles the SSD to 256GB.

The actual difference in our test results between the 2012 and 2013 models was minor. Year-over-year application performance doesn't show any real improvement, and the new Air actually ran some tests a hair slower. As a longtime MacBook Air user, in everyday use -- Web surfing, social media, HD video playback -- the 2013 MacBook Air didn't feel any different than the previous version. Any of the past few generations is more than powerful enough for mainstream users.

Neither is a gaming machine (and you'll have to move all the way up to the 15-inch Retina Pro to get a discrete Nvidia GPU), but our anecdotal gameplay tests in Portal 2 show that the Air can handle mainstream games that lean a bit more on the casual side.

Battery life is where the new MacBook Air (both the 11-inch and 13-inch versions) really stands out. The previous-generation 13-inch Air ran for 7 hours and 27 minutes in our video playback battery drain test. The 2013 version blows that out of the water, with an astonishing 14 hours and 25 minutes on the same test. That's better than Apple's estimate of 12 hours, and one of the only times our tests have indicated longer battery life than a manufacturer's claims.

Now, before we get too excited, there are a few caveats for that number. Much of the credit must got to Intel's fourth-generation Core i-series platform, which was pitched as being incredibly power-efficient. Our early tests confirm this, with the new 13-inch Sony Vaio Pro 13 running for nearly 9 hours. And, while this is a much better score than last year's Air, the CPU itself runs at a lower clock speed, and the new Intel chips are especially optimized for video playback, which is the heart of our battery test. Using Wi-Fi and Bluetooth heavily or playing 3D games would cause that number to drop.

But even keeping those factors in mind, Apple's typically stellar battery achievements and Intel's new Haswell chips have combined to make this a truly all-day laptop.

For a laptop that looks and feels so identical to last year's model (and frankly, the prior year's as well), there's actually a lot going on behind the scenes in the new 13-inch MacBook Air.

The overly familiar design and lack of trendy new features (touch screens, higher-res displays, NFC) can make it hard to get particularly excited about the 2013 Air, especially considering the basic application performance is so similar to the 2012 version. The updated Intel GPU is welcome, even with the still-sparse OS X gaming environment, and the lower starting price helps, too, making this just a couple of steps above an impulse purchase, at least as far as laptops are concerned.

But if all that adds up to a modest step forward, the amazing battery life, which Apple and Intel must share credit for (with the scale tilting towardsthe Intel side), makes this feel like a brand-new era for the MacBook. Even if our 14-hour video playback battery life run is cut by a third or more in rigorous real-world conditions, you've still got a true all-day, always-on computer. Couple that with OS X and the best-in-show trackpad and gestures, and I'd be hard-pressed to think of a single competitor that comes close to the ubiquitous usefulness of this system.