The latest iPad is a 12.9-inch powerhouse that offers an optional keyboard and stylus.

Xiomara Blanco is an associate editor for CNET Reviews. She's a Bay Area native with a knack for tech that makes life easier and more enjoyable. So, don't expect her to review printers anytime soon.

Hailed by Apple CEO Tim Cook as "the biggest news in iPad since the iPad" at its launch event in San Francisco, the extra-large iPad Pro is a new 12.9-inch tablet as thin as the iPad Air and powered by the new A9x 64-bit chip. Running on Apple's latest software, iOS 9, the iPad Pro will work with a stylus, dubbed Apple Pencil, and a smart keyboard accessory. It was launched alongside an updated iPad Mini 4 and lower pricing for the rest of the iPad line-up.

The new iPad Pro is 78 percent bigger than the iPad Air 2 and, according to CNET's Scott Stein, who had hands-on time with the new tablet, it's massive. Weighing 1.57 pounds (713 grams) -- about the same as the original iPad -- and at 6.9mm thick -- almost as slim as the 6.1mm iPad Air 2 -- it isn't a big burden to handle, just a little cumbersome if holding it one hand. The 12.9-inch screen boasts a 2,732x2,048-pixel resolution Retina display and it's big enough for comfortably viewing two apps side-by-side. The big tablet feels more like a laptop, though, due to its huge size, it's not exactly meant for taking on the go. 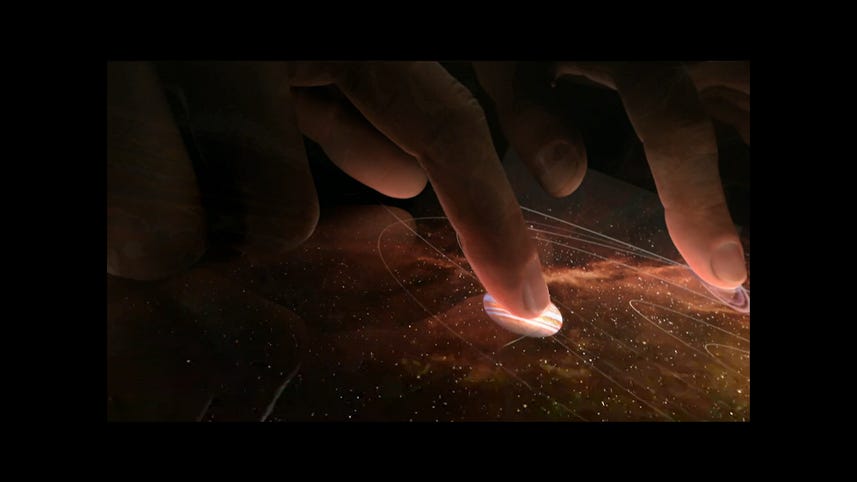 Here's the first look at the iPad Pro
2:01
Watch Now

Along with the new design comes a new processor. The iPad Pro houses an A9x chip that will purportedly perform 1.9 times faster than its smaller counterpart, with graphics performance faster than 80 percent of portable PCs, according to Apple. It'll also offer about 10 hours of battery life.

Aside from the speedy new internals, the high-end accessories are what make the mammoth-sized model an interesting addition to the iPad family. Most notably, the iPad Pro supports a pressure-sensitive stylus -- the Pencil -- that promises more accuracy for graphics and photo work.

Watch this: Apple Pencil is a stylus for your iPad
01:34 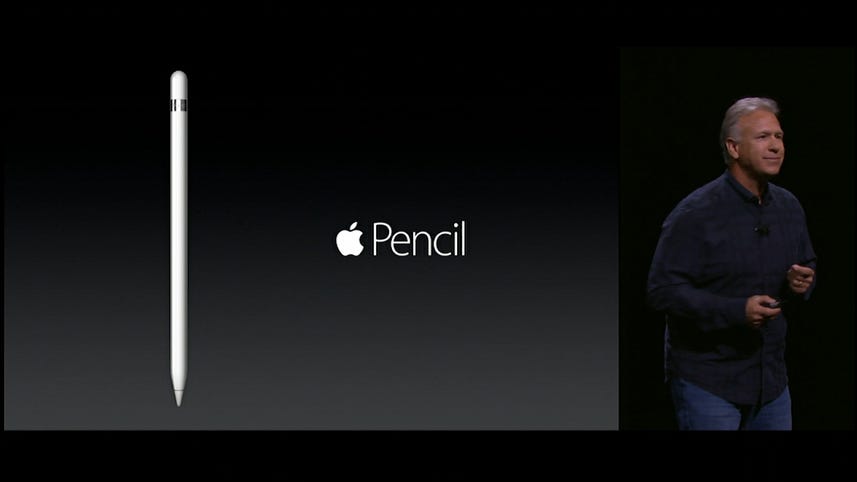 Apple Pencil is a stylus for your iPad
1:34
Watch Now

The Apple Pencil is specifically made for the new iPad, and the responsive sensors on the tablet's screen notice position, force, and tilt. The Apple Pencil houses its own battery and you can easily recharge it by using a Lightning adapter and plugging it into the iPad Pro. The ability to adjust the thickness of the stroke by applying light or heavy pressure and accurate precision are two of the ways the Pencil is geared to satisfy creative professionals, like graphic designers. In addition, two places at the tip of the Pencil emit signals to create shaded strokes, making detailed drawing also a possibility.

The Smart Keyboard, a keyboard especially for the iPad Pro, looks a lot like the one for the Microsoft Surface Pro 3, and works similarly. It's made from woven fabric and when unfolded as a cover, it reveals a physical keyboard that magnetically attaches to three small circles on the side of the iPad Pro. The trio of circles, called the Smart Connector, can carry power and data.

It's reminiscent of what accessory makers like Logitech already offer, yet Apple's accessory lacks any new features: no trackpad or pressure-sensitive keys. Despite this, it's the Smart Keyboard is still comfortable to use and fits the tablet like a glove.

All these accessories aren't just for nothing. Apple also a slew of productivity-geared apps meant to utilize the Pencil and Smart Keyboard to their full ability. In addition to Apple's new Notes and Mail apps in iOS 9, Adobe and Microsoft Office suite apps, including Word, Excel and Powerpoint, will be available for the iPad Pro with integrated support for the Apple Pencil. Paired with the recently announced split-view feature, which allows you to view two apps at once, the Pro is prime for getting some serious multi-tasking.

Watch this: iPad Pro gets a Smart Keyboard case
01:28 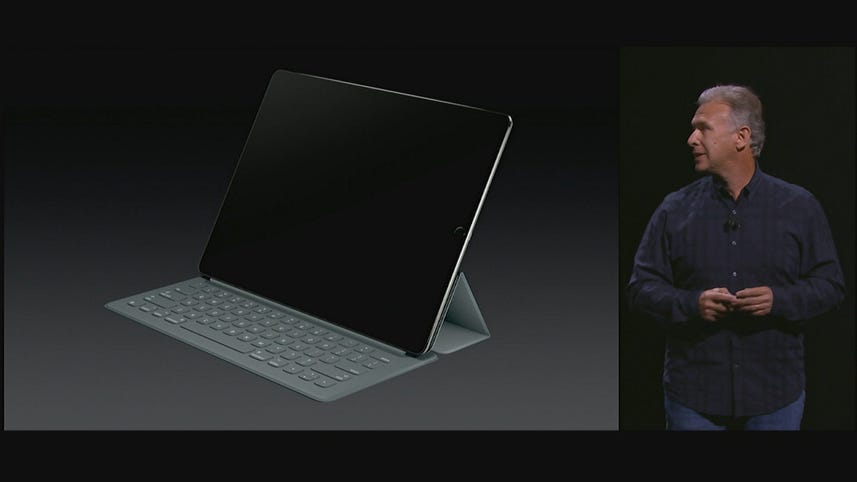 But what's a bigger screen without bigger sound? The iPad Pro houses four speakers that are three times louder than the iPad Air and automatically balance the audio on the left and right sides, depending on how you're holding it. Other features on the iPad Pro include a Touch ID sensor built into the home button and an 8-megapixel iSight camera on the back. Notably, though expectedly, there's no USB-C port.

The iPad Pro is also one of the most "green" tablets Apple's made. It's constructed PVC-free with recyclable aluminum, arsenic-free display glass, and a mercury-free LED-backlit display. The Apple iPad Pro will be available in silver, gold, and space grey colors in November.

The Apple iPad Mini 4 was also quietly announced alongside the iPad Pro. The 7.9-incher has a new 8-megapixel rear camera and it's updated to house 2GB of RAM and the same processor as the iPad Air 2. The iPad Mini 4 is in stores now and pricing starts at $399.

Australian pricing and availability have yet to be announced, but the $799 starting price converts to roughly AU$1,130 (with tax sure to make the final price higher).

See all the news from the Apple event.